If you’ve been watching television or movies for, oh, the last couple of decades, then Regina King is undoubtedly a familiar face. King, who recently nabbed a fourth Emmy nomination for her performance in the Netflix drama Seven Seconds, has crafted a staggering career for the better part of two decades. She has appeared in acclaimed and popular films like A Cinderella Story, Ray, Enemy of the State, Legally Blonde 2: Red, White, and Blonde and Jerry Maguire. Her TV credits are nothing to sneeze at either. The Big Bang Theory, Shameless, 24 and Southland all figure prominently in King’s illustrious career — not to mention the credits she’s earned as a director and producer. With a lifetime of knowledge in front of and behind the camera under her belt, it makes perfect sense that King would partner with Gillette Venus for the “Her Shot” campaign, which seeks to offer a platform for 10 new female directors to step up and create videos that uniquely highlight the female perspective.

When we spoke with King recently about her involvement in the “Her Shot” campaign, we not only learned why it is so important for her to be involved in this initiative, but we also got some insight into how her mother helped her get a leg up in life and what other Emmy-nominated TV show you need to check out ASAP.

SheKnows: What is making you feel powerful these days?

Regina King: Every time I wake up healthy, I feel happy and powerful. There’s this saying that a grip [a specialized equipment technician in film and television] that I used to work with when I’m directing things in Atlanta, and he says, “As long as I wake up” — and he taps his foot on the ground — “I’m good.” So every morning I wake up at healthy and my family’s healthy. That’s making me feel good.

SK: Can you tell me a little more about how you got involved with the “Her Shot” campaign?

RK: The “Her Shot” campaign is fantastic. It’s a campaign that I’ve had the wonderful opportunity to partner up with a Gillette Venus on and to kind of help launch this campaign. The genesis of [the campaign] came from the recognition Gillette Venus had about how they’ve gone about designing their products for women. What they’ve done is in their research, they talk to women and they find out what it is that women want and need and things that would make products work better for them. They’ve taken it a step further with the “Her Shot” campaign by creating a platform for young and thriving creatives that are women that need to have their perspectives shown. It is a space that [Gillette and I have] created and it’s a platform for female directors that we [don’t know about yet], but we will learn their names and we’ll get to see them express their stories through their own unique perspectives. 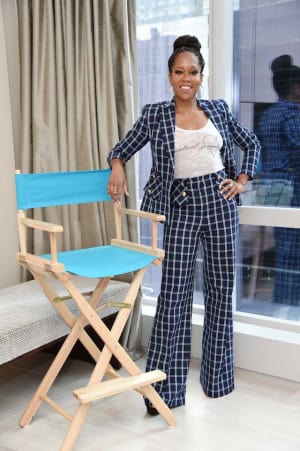 SK: Why is it important for women to lift up other women, especially women of color?

RK: Oh, my gosh, I wouldn’t be where I am today if I [hadn’t been] a product of that. I’m actually lucky because I am a product of, especially with my directing career, men who have supported and uplifted me as a woman. It was unique because we are women and we know what it is like to be a woman and we know those insecurities that you feel only as a woman. I think it’s almost just like a compliment. When you get a compliment from another woman, for some reason it sits with you stronger than when it comes from a man because you know that it’s coming from a space of familiarity because 9 chances out of 10, that other woman has been there. She’s walked that walk.

SK: Are there any moments that stick out for you where a woman assisted you and helped you get closer to achieving your goals?

RK:  I’ll just start with the first: my mother. My mother has always encouraged us to dream big. When that’s all that you know and you get around another girl [and] that is not what’s going on in her household, it’s kind of like a shock to you. Our mom at a very early age allowed us to do — as far as the arts were concerned — anything we wanted to try. We just had to finish whatever lessons she paid for before we moved on. She just felt like her children should have the opportunity to try whatever it was they were interested in when it came to the arts.

Happy Worthday Mama! @marlagibbs4real is truly a national treasure. From her, I learned how to give to another actor even when the camera i'snt on you. From her I learned the importance of hitting your mark. From her I learned how to find my light. She taught me how to be a professional. And I witnessed firsthand why it was so important to do so. Marla Gibbs was truly one of the first women to sell, produce, and star in her own show, 227. And it ran for 5 seasons on NBC. She did this all while running and owning her own resataurant club, Marla's Memory Lane. This supperclub was the destination for all the jazz greats. She also owned and ran Crossroads Performing Arts in South Central.Her school provided a space for hundreds of kids to realize their creative gifts. I was one of them. This single mom from Detroit by way of Chicago has shared her talent and gifts with so many of us. I am so grateful to have been one of the lucky ones who got to sit on your lap and find out that geniuses are not only brilliant, they smell good too! 😁 You blazed a trail that made the little me know it was possible to be the big me. Words could never express the amount of love and appreciation I have for you, Marla! This is what a REAL OG looks like! Everybody please join me in wishing @marlagibbs4real a marvelous birthday!!!

SK: Who are some female actors, writers or directors you’d love to work with in the future?

RK:  I would love to work with Dee Rees [director of the 2017 Oscar-nominated film Mudbound]. I think she’s just an amazing writer and director. She is one that I think is a great example of how many voices we’re not hearing [right now]. There are thousands, millions of women that are out there who have something to say and who have stories to tell but don’t have the opportunity; [Rees is] one that’s broke through. She’s somebody that if I knew that she was speaking somewhere and I was in that city, I’m definitely going to check her out.

SK: The Emmys are coming up! In addition to checking out your nominated performance in Seven Seconds, are there any other Emmy-nominated actors or TV shows that you love that you would encourage folks to seek out?

RK: I think it’s Insecure. [That] is a show that I would encourage people to check out. I feel like what [series cocreator Issa Rae] is doing, what all of the writers are doing — they are representing a huge part of society right now. Just entering your 30s, your late 20s, and those things that you’re feeling and that you’re going through… while the cast that is predominantly Black, a lot of those things are not specific to race; they exist in every culture and in every race. I wish that, like, that show was on when I was 29.

More: Jane the Virgin Star Justin Baldoni on What Being a Male Ally Means to Him

SK: What is one challenge you have faced as a working mother and how did you work through it?

RK: This is something that I was just talking about not too long ago. I was kind of at a crossroads in my career where I was realizing that to continue on in the movie industry, I was going to have to start taking roles that shot outside of Los Angeles. I did not want to homeschool my son. I didn’t want to have to leave him at home and miss out on all those little milestones and triumphs that happen in a growing child’s life. So I made the decision to not take any jobs that we’re going to be shooting outside of LA, and that’s how my TV career started. The answer is making most of the time, making the tough choice leads you to down a beautiful path.