Ryan Reynolds and Blake Lively celebrated their sixth wedding anniversary on Sunday, but they of course didn’t get super-sappy about it — at least not on social media. Neither of them addressed the day itself on Instagram or Twitter, although Lively did promote her upcoming film, A Simple Favor. A couple of days before their anniversary, Reynolds also promoted his alcohol brand, Aviation Gin, and Lively couldn’t help but leave a comment on the post.

More: Anna Kendrick Is Getting Between Blake Lively & Ryan Reynolds

Reynolds posted an Instagram photo of an Aviation Gin-branded truck featuring a picture of the product and a huge, smiling picture of Reynolds himself. The text on the truck reads, “Driver does not carry cash, just Aviation Gin,” a quote attributed to Reynolds.

In the post, he wrote, “Turns out the driver really doesn’t carry cash. But he DOES carry pepper spray… and a shitload of @aviationgin #Aviationowner.”

Lively commented on the photo in a supportive but still totally teasing way. She wrote, “Who needs a mini van?! I’m driving this from now on. Subtle, gorgeous, and OHMYGAWDYOUREHUGE.” 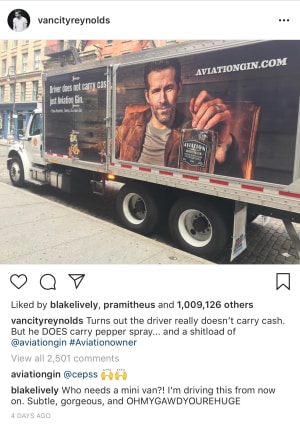 Lively isn’t wrong. Reynolds’ visage takes up the majority of the branded truck. We love the subtle implication that he is gorgeous, not just the advertisement itself. Well played, Lively. Well played.

These two are known for trolling each other, from faux social media feuds to interview jokes about the status of their relationship. After six years of marriage, it’s honestly refreshing to see they haven’t lost their senses of humor, as individuals and as a couple.

We don’t know how Reynolds and Lively actually spent their anniversary or if they did anything special at all, but that’s cool. We don’t need to know every detail of their lives. The funny stuff is enough.