During Sunday’s 2018 Creative Arts Emmy Awards, history was made. John Legend became an EGOT winner and the first Black man to ever do so. Alongside Andrew Lloyd Webber and Tim Rice (who also became EGOT winners, those who’ve at least one Emmy, Grammy, Oscar, and Tony), Legend won an Emmy for outstanding variety special for NBC’s Jesus Christ Superstar, Live in Concert.

Legend joins a small list of EGOT winners. Previously, only 12 people had ever earned the achievement. So far, Legend has won 10 Grammys, he took home an Oscar in 2015 for his song “Glory” from Selma, and in 2017, he won a Tony for best revival of a play as a coproducer of Jitney.

More: The 2018 Emmy Nominations Are in, & They’re More Diverse Than Ever

He won his Emmy as a coproducer of Jesus Christ Superstar, but there’s a chance he could win another Emmy come the 2018 Primetime Emmy Awards, which air on Monday, Sept. 17. Legend is nominated for outstanding lead actor in a limited series or movie for his role as Jesus Christ in the live musical production.

“Before tonight, only 12 people had won an Emmy, Grammy, Oscar and Tony in competitive categories,” Legend wrote on Instagram next to a photo of himself, Rice and Webber. “Sirs Andrew Lloyd Webber, Tim Rice and I joined that group when we won an Emmy for our production of their legendary show Jesus Christ Superstar. So happy to be part of this team. So honored they trusted me to play Jesus Christ. So amazed to be in such rarefied air. #EGOT.” 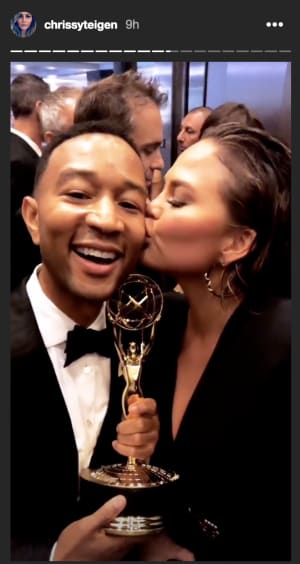 Of course, Teigen couldn’t be prouder of her husband and his major achievement. Before he even got his EGOT, she tweeted after the Emmy nominations were announced in July, “13 nominations for Jesus Christ Superstar this morning! John got two emmy nominations! If he wins, he will complete his EGOT and my spike tv award will probably be moved. But it’s ok I AM SO PROUD!”

And now that he actually won an Emmy? Yeah, Teigen is over the moon, as proven on her Instagram and Twitter. She immediately took to her Instagram Story, capturing the moment Legend became an EGOT winner. She, of course, also shared their post-win celebration.

More: 40 Times Chrissy Teigen Made Our Mouths Water on Instagram

More: 17 Times Chrissy Teigen Was the Queen of Social Media

Rather than partying into the early morning hours, Teigen and Legend went home, got comfortable in their robes and celebrated with some of the best breakfast food ever. Legend made them “EGOT pancakes.”

Per Teigen’s Instagram Story, she declared, “John seriously makes the best pancakes on the planet.”

Here are the famous EGOT pancakes: 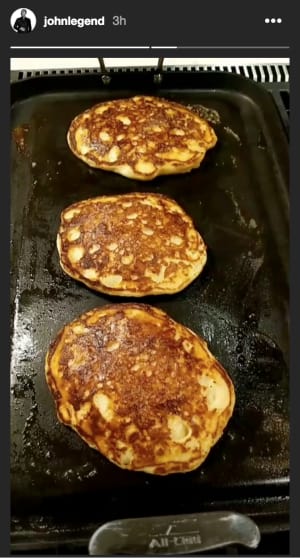 It’s no secret Teigen and Legend make an amazing couple. To see them celebrate Legend’s major accomplishment in such a simple and relaxing way makes them an even more fabulous couple. They didn’t need to dance at a club or attend a huge after-party all night long — all they needed was each other and some EGOT pancakes. They really are couple goals.