There’s nothing quite like when a cast reunites. On Sunday, there was a Downton Abbey mini–reunion, and it’s as glorious as it sounds. Dan Stevens (who played Matthew Crawley) shared an Instagram with Michelle Dockery (Lady Mary Crawley) and Allen Leech (Tom Branson), and the photo is beyond adorable. However, thanks to Stevens’ caption, fans are hoping for Matthew’s return to the drama whenever the Downton Abbey movie debuts.

More: 10 Reasons Downton Abbey Continues to be the Best Show on Television

Should Matthew have a mustache for the #DowntonAbbeyMovie…? Vote below… ☑️ ❎

As you can see, Stevens, Dockery and Leech are all smiles. They look so happy to be back together, but what fans really need to pay attention to is Stevens’ words. He wrote, “Should Matthew have a mustache for the #DowntonAbbeyMovie…? Vote below…” Um, what’s that now? Is Stevens trying to tell us something? Is there a possibility for Matthew to return, or is Stevens completely joking?

Of course, Stevens could just be having some fun with his caption, but fans are crossing their fingers the highly adored Matthew will somehow show up in the movie. Warning: If you’re trying to avoid Downton Abbey spoilers, don’t read any further.

One fan commented on Stevens’ Instagram, “…Matthew would never ever have a mustache. Also, what’s the time frame of this movie?! Before he dies? Or are there flashbacks?! So. Many. Questions.”

Another fan wrote, “OMG Is this actually happening?! I’m gonna faint!! The mustache must stay!”

A different Instagram user posted, “No! But you can really pull it off. It will be interesting to see how Matthew is integrated into the movie. @thatdanstevens your joking Right!? It would be great to have you back.”

Fans aren’t the only ones reacting. Even Hugh Bonneville (Lord Grantham) commented by writing, “OMG OMG OM ACTUAL GEEING G. I’M SO LIKE I CAN’T EVEN.”

Oh, and yes, Stevens’ Beauty and the Beast costar Josh Gad responded. He wrote, “Why are you being a monster?”

Stevens replied to Gad, saying, “It’s this mustache. I can’t help it. #dastardly.” 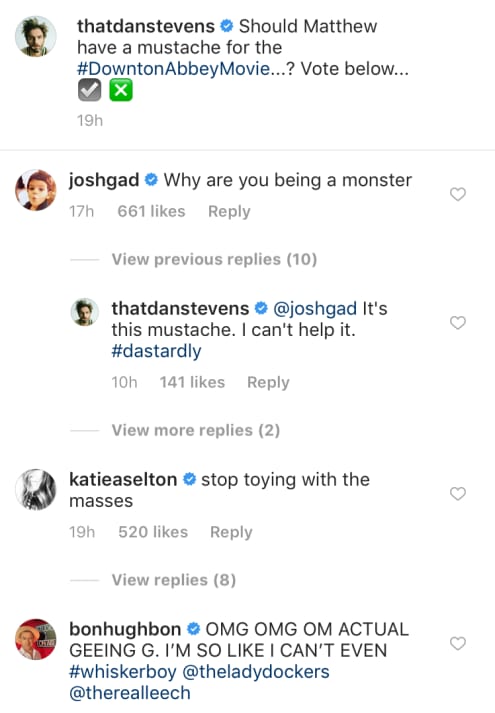 Who knows what Stevens means by his comment, but it’s hard not to get our hopes up, especially after Matthew left the series way too soon. Yes, it was Stevens’ choice, but that didn’t make his exit any easier. To watch him die after falling in love with Mary and starting a family was absolutely devastating to say the least. So it would be wonderful if he could be part of the movie somehow, even via flashback.

On July 13 and after much speculation, a Downton Abbey movie was confirmed. The series tweeted, “Welcome back to Downton! We’re thrilled to announce that #DowntonAbbey is coming to the big screen. Film production begins this summer.” The exact timeline of the film is unclear, but according to Vanity Fair, most of the original cast is expected to return. So far, Lily James, who played Rose, is the only one who has confirmed she will not be back.

Let’s just keep our fingers crossed Stevens will be featured in the movie in some way, shape or form. Even though he was only in three seasons, his character was still a huge part of the drama. To have a movie without Matthew just wouldn’t feel right.