There’s no question that Netflix’s original series Orange Is the New Black is an innovator in TV — and OITNB star Uzo Aduba will be the first to tell you so. The actor spoke at the #BlogHer18 Creators Summit in NYC on Thursday, Aug. 9 and revealed how OITNB surprised her with a powerful lesson about women and career in Hollywood.

For one thing, OITNB paints a surprisingly complex and authentic picture of so many issues — from the country’s broken criminal justice system to sexuality to grief and beyond. But perhaps most notable is the show’s unparalleled level of diversity and representation of women — both on-screen and behind the scenes. And for Aduba, it’s that representation that has made all the difference.

“Before OITNB,” Aduba told the #BlogHer18 audience, “I’d never seen more than one Black female representative [on a show], one Latina female, etc.” OITNB, on the other hand? “We have seven Black women, we have Asian women, gay women, we have trans women on our show, we have varying sizes on our show, and women who are able to tell those stories effectively,” Aduba explained. “Then, on the backside of the camera, we have so many different representations of women as well.”

Aduba went on to chronicle a particularly pivotal moment regarding her career — or rather, regarding her own perception of what the career of a woman in Hollywood could entail. It happened in 2012 on the OITNB set:

“When we’re filming, there’s an area called ‘video village’ where the producers, writers and directors, that’s where they watch the show,” Aduba explained. “So we’re walking back to our dressing rooms through video village, and sitting there we had Jenji [Kohan], our show creator, we had Cindy Holland, the executive from Netflix, I think Jodie Foster was there… All these women were sitting in those seats, and there was just one man. And I remember thinking to myself, ‘I’ve never seen this before.'” 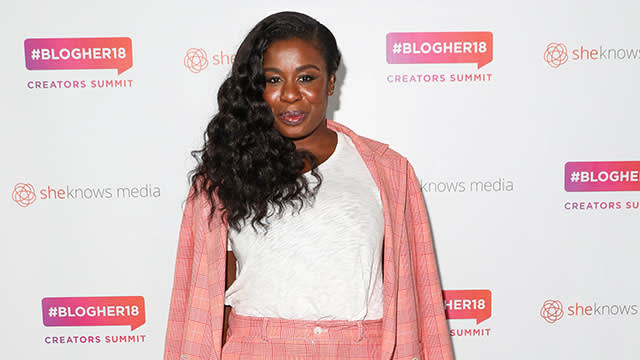 More: How Amy Schumer Learned to Be Woke From Gabrielle Union

For Aduba, what was so powerful about the primarily female production and artistic team on the OITNB set was its shocking rarity. That kind of gender ratio, she told the #BlogHer audience, was still largely “not happening” in Hollywood in 2012. And it damn sure needed to be happening.

“It was a rarity, what I was seeing there,” Aduba added. “And what it did for me — why things like representation matter, why things like your voice being heard matter — is it made me think differently about my own possibility.”

A behind-the-scenes scene like this one disproves the obnoxiously present myth that women “can’t work together” (you know, because we’re “too competitive” or “catty” or “too threatened” by each other or whatever other bullshit people invent to keep us down). And for Aduba, witnessing so many women working together seamlessly and powerfully on OITNB, both on set and behind the scenes, she said, “…expanded, for me, the idea that, wow, there’s a host of jobs within this industry that I could be part of” — jobs that so many talented, driven women in entertainment could be part of.

“And I think that’s what’s so powerful about our show,” Aduba added.

Well, that and the show’s countless other game-changing choices, moments and talents — including you, Uzo.