If you ask anyone who grew up watching the iconic teen sitcom Saved by the Bell who the feminist of the show was, they’d probably point to Elizabeth Berkley, who played the studious and empowered character Jessie Spano. But what about Kelly Kapowski? Was she a low-key feminist too?

When asked at the #BlogHer18 Creators Summit in New York City, actor Tiffani Thiessen, who played the hardworking cheerleader on the show, said, “I think she may have been without knowing it.”

Thiessen, 44, recently starred in the Netflix sitcom Alexa & Katie and authored a cookbook, Pull Up a Chair, that will hit shelves on Oct. 2. During her onstage conversation with SheKnows Editor-in-Chief Justine Goodman, Thiessen also revealed that she has a children’s book in the works, which will be illustrated by her husband, actor Brady Smith. 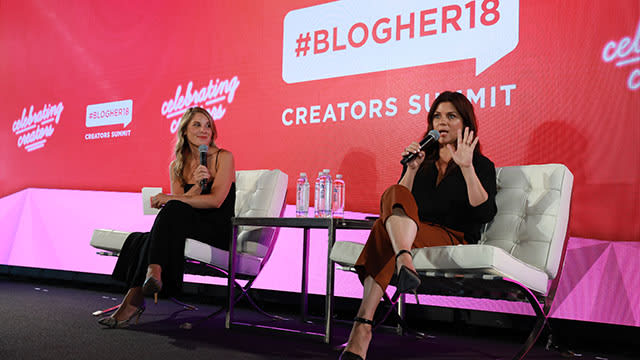 More: Saved by the Bell: A Look at Zack Morris & the Gang Today

Addressing the packed audience at the conference, Thiessen explained that while Kelly may not have been as vocal about women’s rights as Jessie, she was a strong woman in her own way. “They created the character of her having a lot of brothers and sisters, which was all about sharing and having to be all about family, and [they] didn’t have a lot of money,” she explains. “So she made her mark by the little she had, and there’s something so empowering about that too in a different way.”

More: Tiffani Thiessen on Her Life as a Mom

When you think about it, it makes sense: Kelly was a good student, kind to others and never turned down an extra shift at The Max to help support her family. She also managed to find time for her friends, siblings, cheerleading, performing in Hot Sundae and various romantic relationships, most notably with large cell phone owner Zack Morris. Who knew Bayside was such a feminist breeding ground?