Mile 22 is one of those visceral, nonstop, edge-of-your-seat action movies where the intensity only grows as the film goes on. What’s unique and even inspiring about the movie are the courageous female operatives played by two of our favorite actors, The Walking Dead’s Lauren Cohan and MMA fighter Ronda Rousey. Both women bring power, emotion and patriotism to the story as they fight to save America.

More: Mark Wahlberg’s Daughters Want Him to Keep His Clothes On, Please

In the film, a secret paramilitary team sets out on a mission to transport Li Noor (Iko Uwais), a man who’s threatening to set off nuclear bombs in America unless he gets safely out of Southeast Asia. With several factions trying to kill Li, can the Americans get him to an airfield 22 miles away, where he can be extracted?

The American black ops team of Alice (Cohan) and Sam (Rousey) is led by Silva (Mark Wahlberg). Tackling roles typically played by men, Cohan and Rousey shift the gender balance in a male-dominated movie genre, breathing new life into it.

In the past, we’ve seen movies where women practically remove all their feminine aspects to fit in with their male counterparts. Fortunately, this is not the case in Mile 22. Like many women, Alice is also a mother, and she agonizes about not being with her 6-year-old daughter on her birthday. She has a mission to complete, though, and that’s her top priority.

Cohan explained, “Knowing that Alice is not putting her daughter first is what tears her apart. She thinks maybe there’s another way, but this team can’t consider another way. The only way to continue with this mission is to obliterate all other parts of life. It’s heartbreaking to me.”

Though not a mom herself, Cohan remembers a time when her own mother was forced to make sacrifices.

“My mom is an amazing woman, and there was a period of time when my mom was single and raising me and her sisters were helping,” she said. “It was pretty incredible how she was able to juggle all these different roles, and that’s what every mother has to do. It’s obviously magnified in Alice’s role because she’s protecting her whole country.”

Sam is a woman with a selfless heart who’s willing to do whatever it takes to protect our freedom, as Rousey described her character.

“Sam makes it very clear she doesn’t trust anyone, but it’s very important to her to be trustworthy. Her team is her family and she doesn’t expect anything back from what she is giving,” she said. “That willingness to put herself out there and be betrayed over and over again because she has hope that someone is worthy of her trust — the willingness to be hurt over and over again is one of the bravest things about her.”

Rousey said she relates to Sam, and it’s not surprising; as a professional fighter, Rousey also had a willingness to be hurt over and over again. Though such experiences can inspire cynicism, especially considering Rousey lost her last two fights, she insisted that like Sam, she sees life as a glass half full.

“There is an optimist inside of me, too, that can’t be brought down no matter what happens. I still hope for the best in people,” Rousey said, with genuine sincerity. 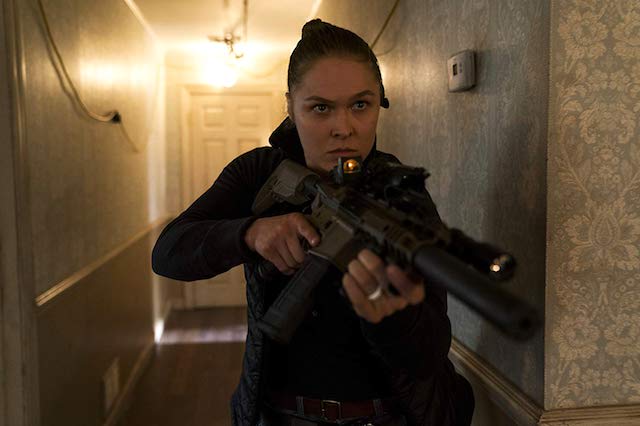 What’s extraordinary in the film is that the action scenes are elevated to the next level. This movie is so much more than a shoot-em-up because the actors succeed in bringing deep emotion into the fighting.

“A fight is just another way to communicate,” Cohan said. “That’s something I learned from our fight coordinator but also something I relearned from Ronda — how much expression there is, even when you’re not speaking. Actually, the most expressive and emotional part of shooting this movie was shooting that big fight scene. Especially since Alice has to keep it all bottled up. For me as an actor, I’ve had a lot of opportunity to express sorrow and grief and loss, but in this movie, I really can’t. Any tears are cut off before I can really go there. It taught me a lot about breathing emotion through every situation.”

Mile 22 also shows a form of patriotism not usually shown in these kinds of movies.

“What is unique about this film and this black ops team is they’re not about glory,” Rousey said. “They’re not about ‘no man left behind.’ It’s about the mission first. Being willing to leave people behind and being willing to be left behind — it’s a different kind of honor, a different kind of valor. It doesn’t mean our team is cowardly. We’re brave in another way. It’s a really good opportunity to show there’s more than one form of bravery and more than one form of patriotism.”

In other words, sometimes losing a battle is just as brave as winning one.

Though Rousey’s character is tough as steel in the film, she rejected the idea that her character is very masculine.

“We’re not in masculine roles but in human roles, and there happen to be men there. No one says, ‘You’re going into a very feminine role doing a military film.’ It has nothing to do with one or the other. Why does it need to be said? This movie is just part of that process of taking it from novelty to normalcy.”

Rousey also said that filmmakers need to open their minds to the diversity of the real world.

“We need to get out of our own way with our own ideas of how things should be. If I’m casting the role of a cop in Ohio, you probably picture a 40-year-old man. Why can’t a cop in Ohio be a 30-year-old woman? People tend to cast what is safe and what is assumed. Those little tiny roles here and there, even if it’s just the security guard, why not make it a woman once in a while? A firefighter is a person who fights fires and doesn’t have to be a dude in his late 20s with ash and sweat on his face. Why isn’t that image open?”

It’s a great question — one that hopefully will sort itself out as we keep moving forward.

When we asked Cohan if she’s planning to return to The Walking Dead, she gave a bit of a cryptic answer.

More: Shit’s About to Get Real, According to The Walking Dead‘s New Synopsis

“The open-endedness of things is what’s so liberating. I haven’t had to choose to leave The Walking Dead to do other things, and I don’t know why everything has to be so rigid in life,” she said.

We feel liberated, too, knowing Cohan is at least open to coming back to the hit TV show. In the meantime, catch Mile 22 in theaters on Friday.