On Monday, Netflix dropped a teaser for Stranger Things season three. It isn’t the typical teaser, but that’s what make it so special. The first look is a retro-styled commercial for a new mall, the Starcourt Mall, opening up in Hawkins, Indiana. It’s exactly what a shopping establishment looked like in the ’80s, with stores like Claire’s, Kaufman Shoes, Waldenbooks, Sam Goody and Jazzercise.

Most important, as showcased in the teaser, the Starcourt Mall has a “state-of-the-art food court,” including Scoops Ahoy Ice Cream Parlor. And guess who just happens to work there? Steve Harrington (Joe Keery) and newcomer Robin, played by Maya Hawke (her parents are Ethan Hawke and Uma Thurman). They are seen donning nautical-themed uniforms and both look thrilled [insert sarcasm] upon saying to the camera, “Ahoy!”

This really is the perfect Stranger Things teaser to get fans excited about the upcoming season. So much so, the video isn’t just serving up ice cream, but what also appear to be major clues about the third season.

More: Here Are Some Theories About the 2 New Actors Joining Stranger Things Season 3

At the end of the video, it says Starcourt Mall is “Coming Next Summer!” So does that mean fans have to wait until summer 2019 for new episodes? That just seems so far away — and is also just plain cruel.

2. Dawn of the Dead vibes

As pointed out by Nerdist, the teaser feels like Dawn of the Dead. For those who’ve never seen the 1978 movie, it’s about zombies and part of it takes place in a mall. Does this mean a new monster is on its way to Hawkins? Or maybe the series will simply pay homage in some way to the cult classic?

Seeing as the mall is said to be opening in summer 2019, this seems to suggest season three will take place in summer. So far, we’ve experienced Christmas and Halloween in Hawkins, so summer would be a welcome change of pace.

More: The Stranger Things Kids Can All Probably Retire After Season 3

If season three does take place during summer, then that would mean the setting wouldn’t be at school, like it was for the first two seasons. Who knows? Most of the season might even take place at the Starcourt Mall. Whatever the case, it would be nice to see how everyone in Hawkins spends their summers, you know, when they’re not fighting monsters and trying to figure out the Upside Down.

5. The Hunt for Red October

As reported by Insider, after the mention of Waldenbooks, the camera quickly focuses on Tom Clancy’s novel The Hunt for Red October. According to the outlet, this doesn’t seem to be a coincidence, but a clue about the season three plot. Clancy’s novel is about a Soviet captain who abandons his orders and defects from the Soviet Navy. In Stranger Things season one, Dr. Brenner was shown to be using Eleven’s powers to spy on Russians. Hmm… maybe this will come back into play somehow? 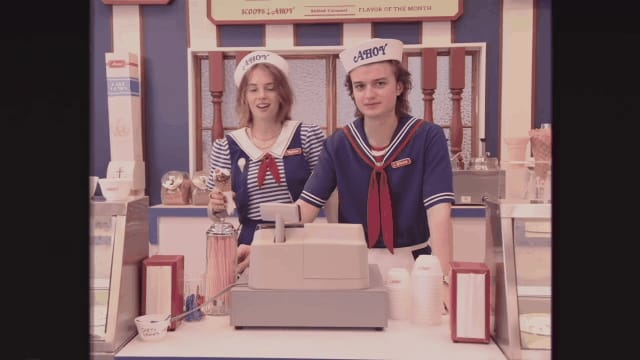 Finally, there are Steve and Robin. Not only does it look like Steve’s summer job is scooping ice cream, but he will be working alongside the new character. Will they be romantically involved, especially now that Steve and Nancy are no longer a couple? Or, maybe Steve and Robin will end up battling whatever new darkness is headed Hawkins’ way? As for Robin, per Deadline, she is “described as an alternative girl who is equal parts sharp and playful. Bored with her mundane day job, she just wants a little excitement in her life… and gets more than she bargained for when she uncovers a dark secret in Hawkins.”

The new season is really far away, but these clues already have us on edge. We can’t wait for summer 2019.