And the holiday Emmy goes to… ?

Former One Tree Hill stars Hilarie Burton and Robert Buckley are hilariously campaigning for a “holiday Emmy” on the set of their Lifetime holiday movie.

More: The One Tree Hill Cast Might Actually Surprise Us With a Reunion

Tuesday, both took to Instagram, where they shared the same photo of them awkwardly posing in front of a Christmas tree. Burton is wearing flannel pajamas and Buckley is sporting sweats and a loose T-shirt. They went all in for the photo op, but really, they’re probably just wearing their costumes.

Burton and Buckley decided to joke around by creating their own Emmy campaign. “For your Consideration…… @robertearlbuckley and I shamelessly submit ourselves for #HolidayEmmys2018. Your support is appreciated,” Burton captioned her photo. As for Buckley, he wrote, “It’s never too early to start campaigning for a Holiday Emmy. #FYC #HolidayEmmy2018”.

More: 25 Pictures of the One Tree Hill Cast That Will Give You All the Feels

For your Consideration…… @robertearlbuckley and I shamelessly submit ourselves for #HolidayEmmys2018 Your support is appreciated.

They clearly know how to have fun on set. Even Burton’s actor husband, Jeffrey Dean Morgan, got in on the joke by commenting on his wife’s Instagram, “You know my vote goes to a. Mr. Heat Miser or b. Abominable Snowman with toothache… every damn year. But maybe… I can be bribed for my vote.” Later, he added, “Maaaaabye…. if ya play the fiddle dressed as an elf or some such awesome. Tall order woman. Real tall.”

More: Hilarie Burton Describes Her Scary Encounter With a One Tree Hill Showrunner

Burton’s friend and OTH costar, Sophia Bush, also commented on how amazing Burton and Buckley look in the photo. “But why do you both have such perfect skin?! Gorgeous humans.” They really do look fabulous, don’t they? 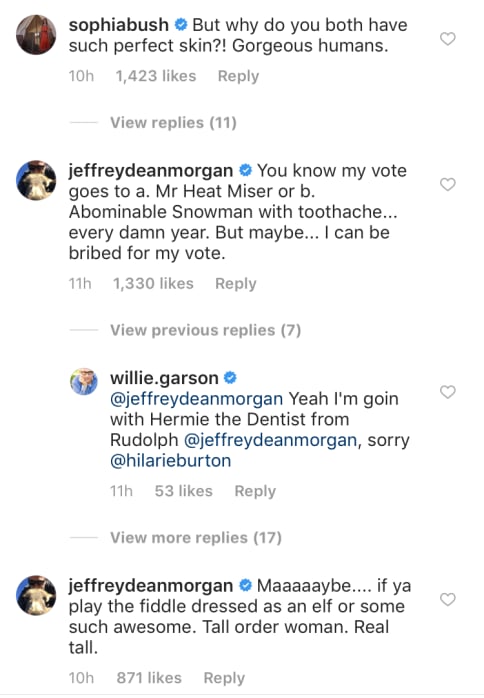 Oh, and even James Lafferty and Danneel Ackles responded, because this cast is seriously the best and can’t help but support each other. As you can see below, Lafferty is totally voting for them and Ackles just loves them both so much. 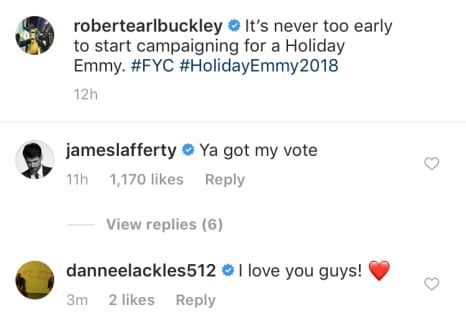 In early June, Burton, Buckley, Ackles and Antwon Tanner shared photos on social media of the four working on a new holiday project together. Understandably, the One Tree Hill fandom excitedly responded and started wondering if some type of reunion was happening.

Well, those rumors were quickly put to bed when a couple of days later, it was announced they were all starring in a 2018 Lifetime holiday movie called The Christmas Contract.

As reported by Deadline, Burton plays Jolie, who heads back home to Louisiana for the first time since breaking up with Foster (Hunter Burke, Claws). She’s, of course, wary about returning, especially after learning Foster has a new girlfriend. Enter Buckley, who plays Jack, Ackles’ on-screen brother, who is set up with Jolie by his sister, Naomi, as a way to make things less stressful and so she’s not alone. Eventually a “Christmas contract” results courtesy of Naomi.

More: Sophia Bush Says a One Tree Hill Reunion Would Be Cool — Let’s Make It Happen

Per Deadline, “Jolie, a professional web designer, is hesitant [about the situation with Jack]; so, Naomi, a lawyer, creates a Christmas contract to give them both something they want — a buffer for those awkward moments around Jolie’s ex and a website to help sell Jack’s upcoming novel. Unbeknownst to them, the Christmas contract proves to be so much more than what they signed up for.”

Anyone else hoping a romance brews between Burton and Buckley’s characters? Oh, and to make it even more amazing, Tyler Hilton, or as OTH fans know him, Chris Keller, will also make a musical appearance.

Even though we aren’t getting the OTH reunion we thought, this Lifetime holiday movie is definitely giving us more than we could’ve hoped for. Let’s hope Burton and Buckley share even more photos from set.