Their characters may not have found happily ever after on Game of Thrones, but former costars Kit Harington and Rose Leslie found their real-life fairy tale on Saturday when they said “I do.” The couple wed in a romantic service at Scotland’s Kirkton of Rayne Church. After the service, Harington and Leslie — who played lovers Jon Snow and Ygritte for a time on GoT — guided guests to nearby Wardhill Castle, which has been in Leslie’s family for around 900 years.

Although it has been rumored that Leslie didn’t want their nuptials to turn into a giant homage to the HBO show, GoT still made its way into the big day. You can’t exactly overlook the stunning GoT-like setting. Wardhill Castle remains in the care of Leslie’s father, Sebastian Arbuthnot-Leslie, who was on hand to walk his daughter down the aisle (in a kilt, no less!). 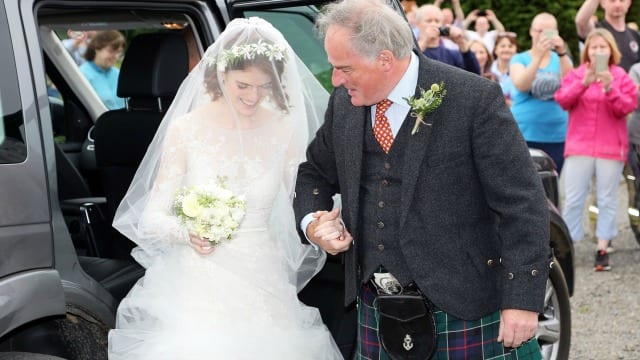 Plus, prior to the wedding, the bride and groom reportedly used the Royal Mail’s limited run of Game of Thrones stamps for invitations. Naturally, a slew of the couple’s GoT costars also made the trip to Scotland to celebrate Harington and Leslie becoming husband and wife. Sophie Turner, Peter Dinklage, Maisie Williams and Emilia Clarke were all spotted in attendance.

Leslie beams in photos, wearing a long-sleeved white lace dress with a wreath of flowers atop her head. Harington looks sharp as well, showing up for the service in a three-piece suit. If earlier intel proved accurate, a hooded monk presided over the ceremony.

After the service, guests cheered and rained confetti down on the newlyweds, who headed back up the aisle and into a Land Rover emblazoned with signs saying “Just Married.” 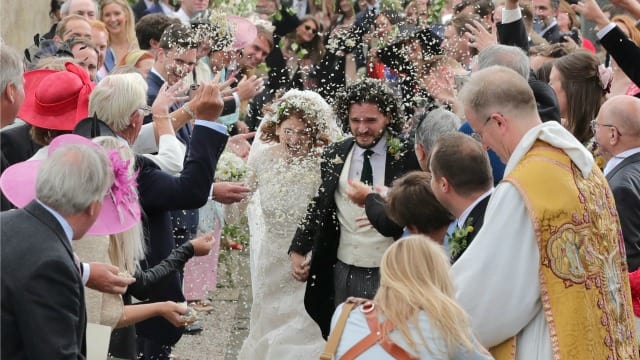 The couple announced their engagement back in September via a notice in the Times of London. However, if you ask Harington, their trip down the aisle basically began when they met on the GoT set in 2012.

“Because the country is beautiful, because the Northern Lights are magical and because it was there that I fell in love,” Harington confessed to Vogue Italia of his favorite part of filming. “If you’re already attracted to someone, and then they play your love interest in the show, it becomes very easy to fall in love.”

Best wishes to the happy couple!