Asia Argento is still in deep mourning for her partner, Anthony Bourdain, and on her Instagram account, she’s letting her emotions pour out in a very honest, raw way. Her followers who have lost a loved one may relate on a deep level. On Friday, Argento posted a previously unseen photo of Bourdain to mark two weeks since his death on June 8.

Argento’s photo appears to be from one of the couple’s intimate vacations. Bourdain and Argento both look happy, with him behind her and leaning in close, blue water visible in the background. The caption is a simple but striking reminder of the loss Argento is processing: “Two weeks without you.”

My A where you be

In addition, Argento’s Instagram story from Thursday and Friday indicates that she has been weighed down by intense feelings of grief and sadness. We preserved some of the photos and screenshots from videos below.

In one photo, you can see Argento’s face, slightly obscured by a graphic, with the caption “Cosmic sorrow.” Her eyes are puffy, as if she was crying when the photo was taken. 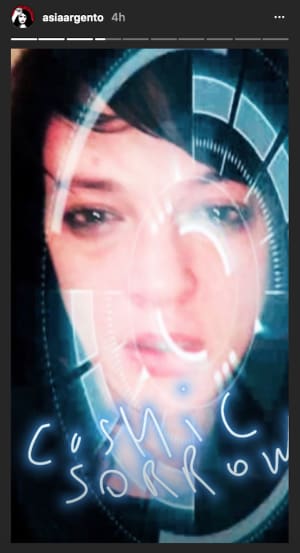 The second photo is a still taken from a video where Argento looks forlorn. Its caption is a graphic that reads, “Please wait. Don’t lose faith.” 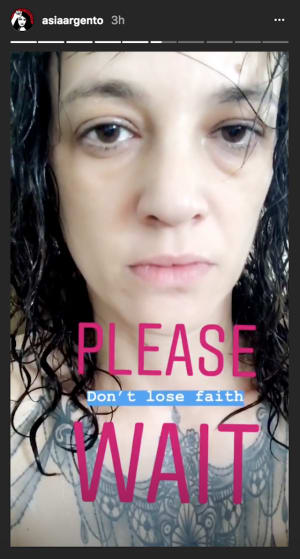 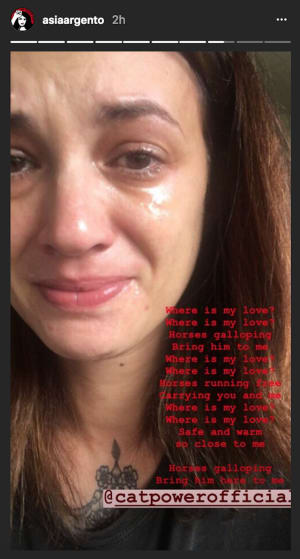 Argento has been very candid about her grieving process, sharing her journey with her followers in the weeks since Bourdain’s death. Her official statement was posted to her Instagram mere hours after the news of his death surfaced.

“Anthony gave all of himself in everything that he did,” Argento wrote. “His brilliant, fearless spirit touched and inspired so many, and his generosity knew no bounds. He was my love, my rock, my protector. I am beyond devastated. My thoughts are with his family. I would ask that you respect their privacy and mine.”

More: All the Celebrities We’ve Lost in 2018

Argento has not released any further statements about Bourdain’s death.