Amazon is about to become the home of Hugh Grant’s latest project, the three-hour miniseries A Very English Scandal. From the sound of the title, we’re guessing he is going to be both very English, and if we know a thing or two about Grant, he’ll be very much up to his old acting tricks and traits, which he frequently showcases in other performances.

From the trailer alone, this dramatic miniseries looks like it’s a far cry from the romantic comedies we’re used to seeing him in, as Grant plays real-life U.K. politician Jeremy Thorpe, who was tried for conspiring to murder his former lover, Norman Scott (played by Paddington‘s Ben Whishaw), in the 1960s.

More: Hugh Grant, Most Private Celebrity in Hollywood, Is Getting Married

There’s no way to know what to expect from what is basically the human embodiment of C-3PO, but there are a few things we know he’ll just absolutely do because he’s done them in practically every movie he’s ever appeared in. Here are our guesses:

He runs his fingers through his floppy hair

Grant has been a prolific actor for 25 years now, and there have been quite a few hair trends for men over that period of time. But just as Grant doesn’t seem to change his expressions, he also doesn’t alter his signature locks. His bouncing, wavy brown locks are always tousled, and yet he can’t seem to stop running his fingers through them when he’s sad, frustrated, confused, apologetic… basically all the time.

Uh-oh, something is happening in this scene from 1992’s Bitter Moon. Better put your hand in your hair: 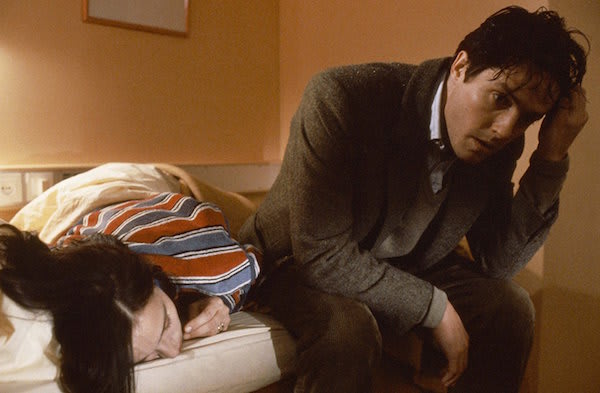 How about play with your hair even more?
https://media.giphy.com/media/af6RDtaBKczeM/giphy.gifEven when he stars in period pieces, like Jane Austen’s Sense and Sensibility, he refuses to do anything even slightly different with his mop. Well, maybe it is borderline slightly more floppy here — but not much floppier. 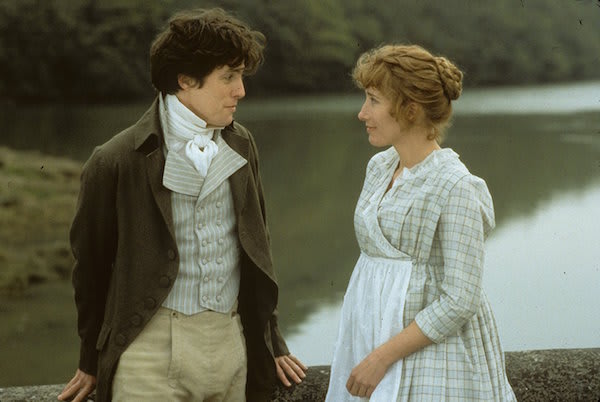 He wears a button-down shirt with the top button unbuttoned

Grant’s absolute go-to piece of clothing is a crisp dress shirt (color options: white, baby blue, pink) with no tie and without the top button or two buttoned. It mirrors his character: prim and proper but also a bit of a mess.

Here’s a classic example from Notting Hill in 1999: 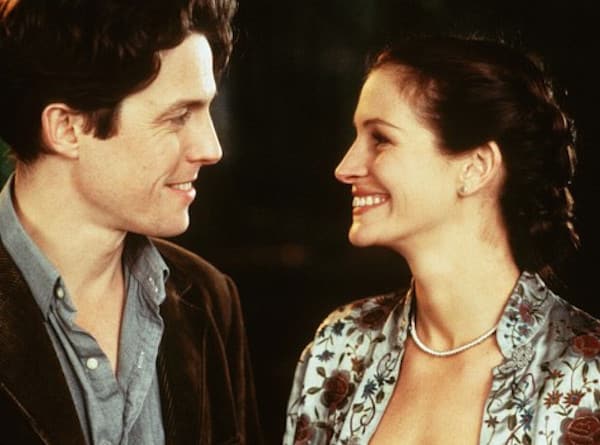 Yes, even if you’re on the beach… dress shirts. Just unbutton the next button down and you’ll look nice and beachy. 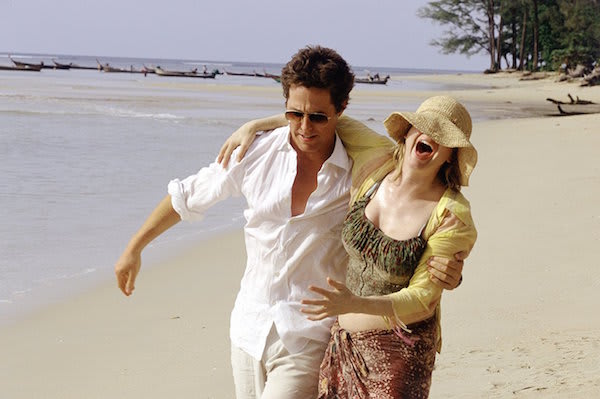 He always seems to bumble or stammer

Grant also loves to bumble and stammer and mumble and stutter — all of those little British-language affectations rolled into one monster of tripping over words and starting sentences over and over again.

Here’s a good example from Two Weeks Notice (and also notice his unbuttoned shirt and hair-touching while you’re at it).

He blinks — a lot

A picture is worth a thousand words, and for Grant, a word is worth about a thousand blinks. This man blinks more times than necessary to keep your eyes moisturized, especially when he’s flustered. And as you know, he’s flustered basically all the time.
https://metrouk2.files.wordpress.com/2017/05/hg.gif

He blinks so much we kind of wonder if it’s included in the movie scripts.
https://media.giphy.com/media/10mt35zUdDw5Uc/giphy.gif

No one likes to apologize for his actions more than Grant’s characters. Whether he’s made a little social mistake or broken your heart or betrayed you forever, he would love to say sorry, and, of course, in the most bumbling and awkward way possible.
https://media.giphy.com/media/Hvz9LlP6hlITm/giphy.gif

And of course we can’t forget his most famous “I’m sorry, ” which was in response to a scandal early on in his career — if you don’t recall, he was arrested for hiring a prostitute. As you might guess, his sorry was so freaking honest and charming that we all accepted his apology without a second thought.
More: Hugh Grant Was the Best Part of the Love Actually Sequel, If You Can Call It That

Finally, now, if you’re ready for it, we have a clip in which Hugh Grant does all of the above Hugh Grant things in a single two-minute film clip. It’s the famous rainy not-a-proposal scene from the end of Four Weddings and a Funeral, and it’s got bumbling, stuttering, mumbling, hair-raking, collared-shirt-wearing, apologizing, dopey, blinking moments aplenty — right?