If recent celebrity engagement news has left you wondering if anyone takes time to fall in love and be sure of their relationship before committing to marriage, we have good news! Slow-burn romance is here to stay, and people like country star Scott McCreery and his girlfriend of six years Gabi Dugal are keeping it alive. The couple married in the North Carolina mountains on Saturday, and according to People, the ceremony was beautiful and rustic.

More: All the Celebrity Couples Who Recently Said I Do

McCreery, an American Idol alum, proposed to Dugal in September 2016 at a mountaintop spot they found accidentally some years ago. He told People, “We were looking for a waterfall about two or three years ago and I completely screwed up and got us lost. And I was like, well, the next trail map, we’re just gonna see where it takes us, and we got out and then came up to these beautiful cliffs. Now it’s kind of our spot every time we go to the mountains.”

The proposal, which McCreery sings about in his single “This Is It,” inspired the venue choice for their summer wedding. Dugal said, “We fell in love with the mountains during the summertime [when Scotty proposed], and our [venue] is like a little castle in the woods.”

On Saturday morning before the wedding, McCreery posted just the title of the song on Twitter, ushering in a swell of warm wishes from fans in the replies.

“We’ve been dating six years and have known each other our whole lives,” McCreery told People prior to the wedding. “That kind of story doesn’t happen too often nowadays. I support her dreams and she supports mine.”

People reports that the ceremony was officiated by McCreery’s childhood pastor and McCreery and Dugal said I do in front of more than 200 loved ones. They exchanged personal wedding vows before heading to their reception, where they shared their first dance to Elvis Presley’s “I Can’t Help Falling in Love.” The couple served Cajun food (in honor of Dugal’s Louisiana upbringing), steak and pasta, with several pies taking the place of a traditional wedding cake. Dugal described the black, white and gold color scheme and decorative choices as “classic.”

Thanks man! Thank yall for being there! Was an awesome day🙌🏼 So pumped to be apart of the #cajunclan! #GeauxPack and #GeauxTigers ! https://t.co/ghxznJ0zKd

These high school sweethearts will reportedly head to Tahiti on Tuesday for their honeymoon, then move into their new home when they return to the U.S. “We haven’t moved in together yet,” McCreery told People. “I’m living with my guys and she’s living with one of her best friends. I love my guys, but it’ll be much nicer coming back from the road and seeing my wife instead of three motley dudes!”

McCreery still seemed to be processing the events of his exciting weekend with Dugal because on Sunday evening, he posted a photo of his wedding band to his Instagram Story. “Crazy,” he wrote. Short, simple, to the point — just like a newlywed still in happy shock might sound. 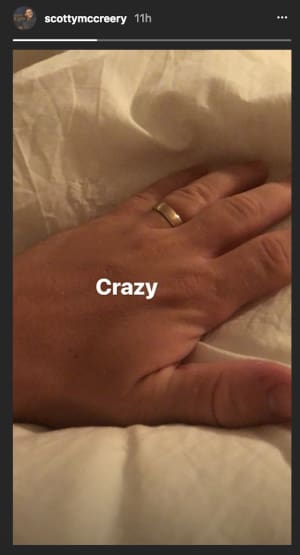 More: A Roundup of Country Couples Who’ve Been Together Forever

People shared an exclusive photo of the newlyweds that shows them both beaming, clearly still in love after six years together. We love this love, and we can’t wait to see where the future takes them.