Beyoncé’s got a lot happening in her life right now. Coming off a hot set at Coachella Music Festival in April, the superstar is currently on tour with her husband, Jay-Z. She’s juggling performances and the duties of a mother, entrepreneur and wife, too. Beyoncé has little time to worry about the new rumors circulating that she’s pregnant, as reported by (among other outlets) The Cut on Friday. But you know who has time to investigate? Us.

More: Beyoncé & Jay-Z Duped Us All on Tour With… Somebody Else’s Twins?

Before we break these rumors down, we need to make this clear: Neither Beyoncé nor anyone credibly linked to Beyoncé has done or said anything to confirm or imply that she is pregnant. As far as we know, Beyoncé is the ferociously talented, amazing, nearly flawless mother of only Blue Ivy, 6, and twins Sir and Rumi, 1. But according to The Cut, the Beyhive seems to be latching on really quickly to the rumor that Bey is pregnant — and they seem to be using really iffy photos to support these already shaky claims.

Those in favor of the pregnancy seem to be dead set on supporting their claim with Bey’s outfit choices. Judging by what she’s wearing during her On the Run II tour and the way the clothes fit her body, they say, she must be pregnant.

Beyoncé looks like she’s either pregnant again or a lil bloated from all that vegan food. Either way God bless her pic.twitter.com/NnkzWRNXkE

If you notice on Beyonces dress a heart is located on the mid section. im convinced that there is a little angel growing inside. Heart represents Heart beat. #Beyonce #OnTheRunII #beychella #coachella #baby4 #jayz #blue #sir #rumi pic.twitter.com/b8vs9daxbb

Maybe Beyoncé is gonna reveal that shes pregnant at the end of the tour. She does love the number 4.

But beyonce is DEFO pregnant pic.twitter.com/wBPO4aF8Ro

We found some high-resolution photos of Beyoncé in these same outfits that show her from another angle. In the first photo, taken on Saturday, is Bey in all her glory in that gold bodysuit/purple cape number. In the second photo, taken a few days earlier on June 6, she’s wearing a form-fitting black bodysuit. The second photo is taken at an angle, so the outline of her belly is more visible. 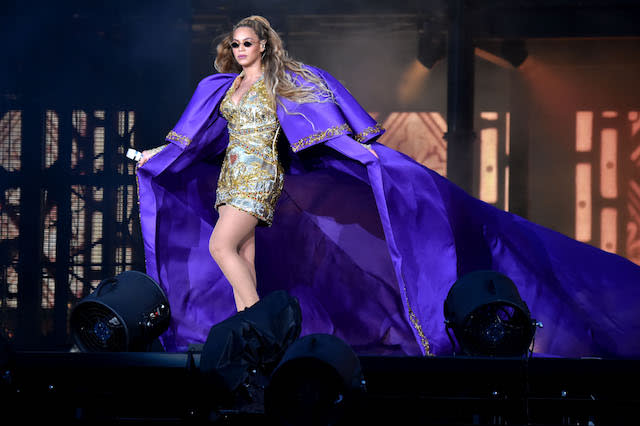 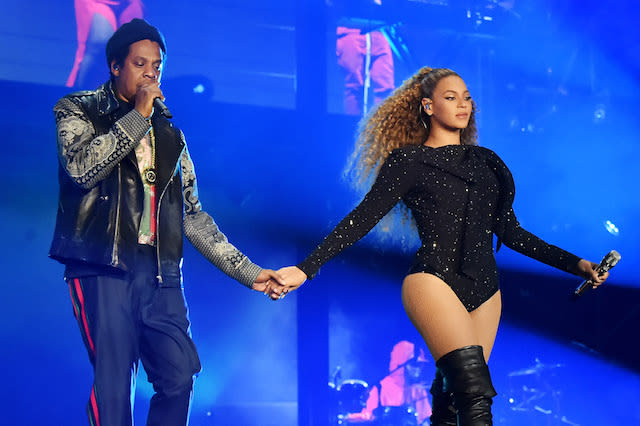 See? No bump. In case this is not good enough and you need more proof, we present this photo from OTR II, taken on Thursday.

The more we investigate, the more prone we are to agree with fans who argue that Beyoncé is simply human, with a body that changes when she eats food, even on a vegan diet. Imagine: A woman who needs to eat enough food to sustain herself through performances and who might sometimes be eating a little extra for the energy boost. Not that wild, folks.

So Beyonce is a little larger in her stomach for one day and people are convinced she's pregnant. SHE COULD JUST BE BLOATED!

Stop shaming women for having a natural body with your stupid-ass theories.

Another great point: Beyoncé gave birth to Sir and Rumi a little over a year ago. She is a new mom (again) with a new mom’s body (again). Can we allow her to focus on something other than the state of her body and instead enjoy her life, personally and professionally?

lets get real. the headliners over here are like ‘fans are for sure: beyoncé is pregnant again’ based on the fact she wears a lot of jackets during otr and they might have seen a BABY BUMP?? im sorry but she gave birth to twins, keep that in mind as well

Whether or not there’s any truth to these pregnancy rumors, they should stop. Beyoncé is famously private about her personal life, choosing to reveal personal news to the world on her own terms. Fans should give Bey a little space and let her announce any pregnancy (if she’s even pregnant!) when she wants to.

More: Beyoncé Killed It at Coachella With History-Making Performance

All things considered, we’ll take this gesture from Bey as our official opinion on these pregnancy rumors.