The MTV Movie Awards have never really been interested in staying prim and proper. No, since the award show first began in 1992, it has made a name for itself with all the outlandish, iconoclastic, politically charged and downright hilarious moments that have bolstered the already vibrant lineup of categories. Those categories, we’ll remind you, have changed over the years, morphing from older ones like best sandwich in a movie, best shirtless performance and best dance sequence to the more current, inclusive gender-neutral categories like best performance in movie, best on-screen team and best hero.

But amid all the wackier moments that are forever burned into our brains, there have been some moments that actually mattered. They made a mark, left a meaningful impression, or simply had us contemplating what’s really going on long after the moment passed.

More: These GIFs Are the Only MTV Movie & TV Awards Recap You Need

The following moments that mattered are worth reflecting on, especially since the 2018 MTV Movie Awards are bound to be more politically charged and filled to the brim with pop-culture hot takes than in previous years.

https://www.youtube.com/watch?v=O0XXgUOnoTwTaraji P. Henson made a strong impression when she honored Katherine Johnson, the woman she brought to life in Hidden Figures, and also promoted love, togetherness and the life-changing power of women in STEM fields all in one amazing speech.

2. Aubrey Plaza gets disruptive at the 2013 awards

Aubrey Plaza pulled a Kanye West and totally interrupted Will Ferrell’s acceptance speech, but you know what? We’re all in for a woman getting disruptive, keeping it funny and, in an accidentally amazing way, reminding us why West’s infamous VMAs moment in 2009 was actually the rudest, most alpha-male move — you just end up looking dumb.

Reese Witherspoon left the audience pretty shaken up with excitement when she broke through her “nice girl” persona and made some sharp, pointed jabs about folks who are famous because of reality TV shows and sex tapes. While we’re not here to speculate on whom Witherspoon was referencing (although TMZ seems to think they know in one of the few remaining videos featuring Witherspoon’s comments), what we’re struck by is Witherspoon’s willingness to call out the gross ways society makes folks famous and to get her hands a little dirty in order to say it.

In 2017, Emma Watson won the first award of the evening and, even better, won the first award from MTV’s newly initiated gender-neutral award categories. Accepting the award for best actor in a movie for her performance in Beauty and the Beast, she brought down the house with her comments on why it’s so important to recognize folks for their accomplishments without it being based on their gender.

Rebel Wilson’s 2013 hosting gig will remain, in our humble opinions, one of the best in the award show’s history. But it was her comments backstage about why she donned a pair of Victoria’s Secret-like angel wings and put on her best glam face that really made her a hosting icon.

As she explained to outlets backstage: “In Pitch Perfect, we’re called the Bellas, which means beautiful, and we have a whole bunch of different girls in the group who are all different shapes and sizes and nationalities. I think one of the good messages in the movie is that you’re all beautiful and that sometimes girls will look at Victoria’s Secret models and think they have to model themselves after that, but I really don’t think that’s the best.“

6. Halle Berry pushes back at sexism in a funny way

https://www.youtube.com/watch?v=HF-oDPvoXlAHalle Berry had a whole heck of a lot of fun with Swordfish costars Hugh Jackman (who looks so young here!) and John Travolta at the 2001 MTV Movie Awards. While the trio were presenting onstage, Berry took the opportunity to push back at the expectation that only women could or should be showing some skin, encouraging the fellas to strip down a bit. They happily obliged, but not the way you’d expect. 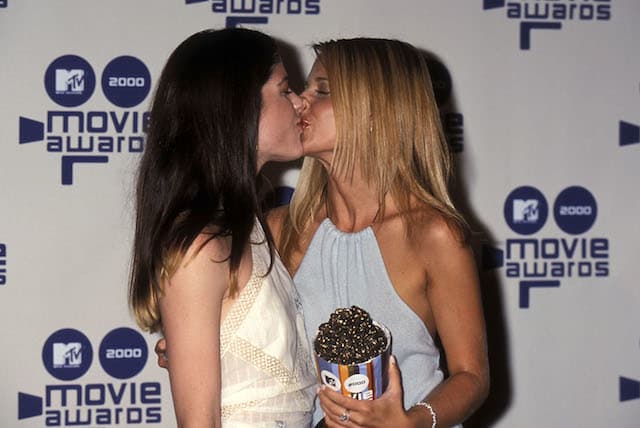 The best kiss category began in 1992, and it only took eight years before Sarah Michelle Gellar and Selma Blair snagged that Golden Popcorn for their educational (but iconically sexy) kiss in Cruel Intentions — a kiss they were happy to recreate backstage at the award show in 2000.

Jim Carrey has never really been interested in playing by the rules, so when he took to the stage in 1999 dressed as a hippie and delivering a rambling, loosely connected speech for no discernible reason, it immediately became an infamous moment.

More: Melissa McCarthy Gives the Sweetest Shoutout to Her Mom at the MTV Movie Awards

These MTV Movie Awards moments certainly leave a memorable impression, but we’ll be curious to see what goes down at the 2018 award ceremony — because you know that the show is going to be full of moments that matter.