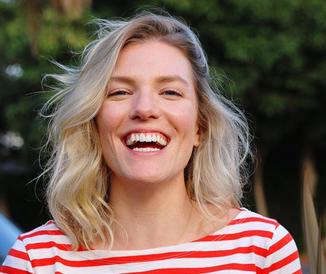 Two years after the much-lauded Baby Cobra, in which Ali Wong took on sex, dating and marriage, the comedienne has returned to the small screen with her new Netflix standup comedy special Hard Knock Wife, now available on Netflix. This time, she’s gracing us with her spot-on musings about life and labia after baby, not to mention the ironic brand of feminism that takes leaning in and topples it.

“Feminism is the worst thing that ever happened to women,” Wong said, and turned some heads, in Baby Cobra. “Our job used to be no job,” she lamented. “We had it so good!… And then all these women had to show off and say, ‘We could do it; we could do anything!’… They ruined it for us!” In Hard Knock Wife, Wong echoes this sentiment, admitting her dreams of being a simple trophy wife were shattered when she realized she was more of a “commemorative plaque.”

In reality, the soon-to-be mother of two is quickly becoming one of the busiest women in showbiz. Formerly a writer on college pal Randall Park’s hit television show Fresh Off the Boat, Wong has stepped in front of the camera on ABC’s American Housewife and will soon costar with Park in a Netflix feature the pair cowrote. She is also writing a book of essays that will be released next year, and if that wasn’t enough, most nights, after putting her daughter to bed, Wong travels to comedy clubs around Los Angeles to perfect new stand-up material. No wonder Wong verbally side-eyes Sheryl Sandberg’s edict to “lean in”: “I don’t wanna lean in, OK? I want to lie down.”

Hard Knock Wife continues to up the feminist ante, with insightful quips about the double standards that befall men and women in relationships, careers and parenting. Wong balks at how, when once in a blue moon, her husband musters up the courage to change their baby’s diaper, congratulatory confetti practically rains down from the sky. But Wong, who’s most often on diaper duty, gets pooped on on the regular. “Where’s my confetti at?” she asks.

But Wong turns the humor into a feminist rallying cry, bemoaning the lack of maternity leave in the U.S. After all, the time off is necessary, “not just to bond with the baby — f*** the baby! Maternity leave is for new moms to hide and heal their demolished-ass bodies!”

No one has ever accused Wong of being afraid to tell it like it is, but it’s refreshing to see a woman — and a pregnant one at that — being so unapologetically truthful about the realities of motherhood, which she lovingly describes as being in “solitary confinement.” When people ask her how the baby is, Wong shrugs. “I’m on the verge of putting her in the garbage. I need to be here to miss her so that I don’t go to jail!” Because, while Ali Wong may prefer lying down to leaning in, her stand-up reassures women that it’s totally normal to not have it all together. And that’s the brand of feminism that we just might need right about now.