Judging by the comments made at the Emmys this year, Donald Trump’s losing in Hollywood — big time.

Despite creating a hit reality show, The Apprentice, Trump is probably the least liked man in Tinseltown right now. His run for the presidency has the nation divided, but nearly all the presenters and winners at the Emmys stood united by creating a Trumpster fire. Here’s what they said.

More: And the best quotes from the Emmys are…

The Jimmy Kimmel Live! host started off the night with a two-for-one burn.

“Television can also tear us apart. If it wasn’t for television, would Donald Trump be running for president? No, he would be home right now quietly rubbing up against his wife Malaria while she pretended to be asleep,” Kimmel said.

The second part of the scorcher came when he set his sights on Mark Burnett, who produced Trump’s reality show, The Apprentice, and was in the audience.

“He’s sitting right there. Thanks to Mark Burnett, we don’t have to watch reality shows anymore because we’re living in one.”

But reality TV king Burnett added his own sizzle by saying, “Hillary Clinton called me in the last few minutes so that I’ll personally thank Jimmy Kimmel for an extra free five minutes of ABC network publicity for Donald Trump.”

Burnett kept the joke going by saying, “Tomorrow night, we are back with Miley Cyrus and Alicia Keyes, your next Supreme Court Justices.”

Julia Louis-Dreyfus was all apologies, implying she might be partially responsible for Trump’s bid for the White House, given that her show blurs the line between politics and humor.

“I’d also like to take this opportunity to personally apologize for the current political climate. I think that Veep has torn down the wall between comedy and politics. Our show started out as a political satire but it now feels like a sobering documentary. So I certainly do promise to rebuild that wall and make Mexico pay for it.”

Actresses Mandy Moore and America Ferrera teamed up as presenters and had their own fiery take on Trump’s transition from TV to politics.

Moore said, “Whether physical competition or a talent show, a reality series can lead to fortune and fame.”

Ferrera then added, “And maybe even the White House. And that’s not a joke, that’s just what’s happening. So, Tim Gunn 2020?”

Master of None actor and Emmy winner Aziz Ansari had a few blazing jokes of his own, saying, “It’s an election year and I want everyone to know that after careful consideration, I’ve decided I’m going with Trump, which is why I’m also recommending we get rid of all Muslim and Hispanic nominees from the ceremony immediately. Wow, this would be so much easier if we were at the Oscars. Mom, Dad, I know I just thanked you but you need to be escorted out right now, I’m so sorry. America Ferrara, nice try changing your name to America, but you’re not fooling anyone. You’re out. And you know what, let’s get Tambor out of here and open up that best comedy category!”

The Apprentice was nominated for four Emmys over the years but never earned the gold statue, which may be the biggest burn of all. 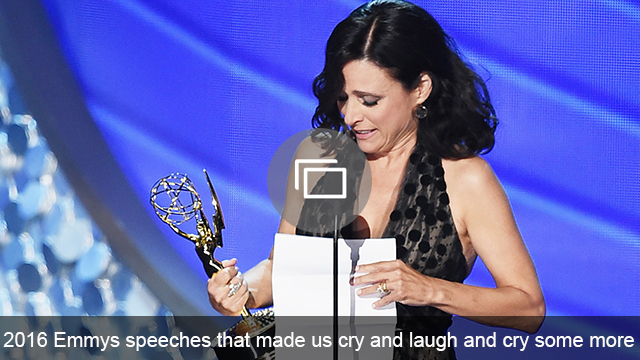