The seventh and final season of Rizzoli & Isles is upon us, and already… yikes. If you haven’t been watching, here’s what to know: Monica Reyes is the one who’s been tormenting Jane all this time. There was a lot of shooting. Jane ran around in a dark alley barefoot. Maura has a head injury, which is already affecting her ability to remember important words, and making me increasingly nauseous in anticipation of the rest of this season.

More: QUIZ: Are you Rizzoli or Isles?

Could there be a more tragic fate for Maura than a loss of cognition? (I mean, other than death.) She’s among the smartest female characters on television, so in a way, it’s appropriate, plot-wise, that she’d suffer in this manner, but also, ugh. Why? Are we going to have to watch the slow (or maybe not slow, considering we’re already four episodes into this season) deterioration of Maura’s brain, while the only physical indication that anything is wrong will be the awkward Band-Aid on her forehead? It’s going to be super hard to pay attention to cases this season since I’m already obsessed with Maura and how this injury is going to play out, in addition to how the writers plan to give this show the finale it deserves after seven seasons of delightful woman-powered procedural drama.

It’s not as though the Maura brain thing is the only thing we have to consider in these final episodes. After all, crime still exists and people still have jobs to do. There is the potential of Frankie and Nina actually having a relationship; the whole “Jane has sacrificed her social life for her job” thing; the promise of larger conspiracies (possibly including the Post Office?); the ramifications of the Alice Sands business, which will certainly be felt, even though she’s gone now, and of course, whether or not Maura and Jane will fall into each other’s arms and finally give us all what we’ve been waiting for: a lesbian love story that ends joyfully instead of in doom. It won’t happen, but if you watch the show, you probably think it’s been happening all along, and it’s just not being shown to us on camera, unless you count the morning-after scenes involving pajamas, rumpled hair and heart-eyes. There is certainly the possibility that Jane and Maura will end up with male suitors, but if I can’t have a sturdy and happy lesbian couple on TV, I can at least hope that the writers don’t destroy Maura’s brain.

In parting, here is this most delightful tweet to make us feel a little better.

More: What Angie Harmon’s recent restraining order has to do with her marriage

What are you most excited about in this season of Rizzoli & Isles? How will it all end? Tell us in the comment. 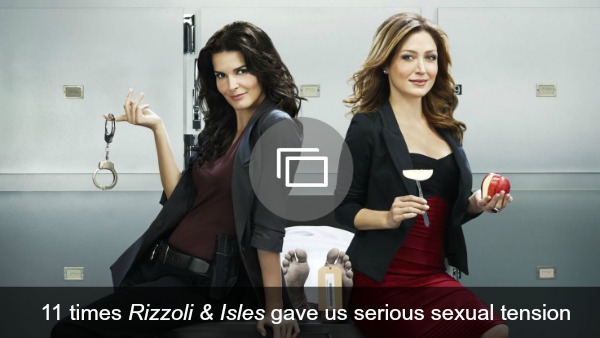