Honestly, we’ve been in love with Thomas Rhett and his wife, Lauren Akins, ever since they showed up on our radar at the 2016 American Country Music Awards — and we fell in love all over again when baby Akins arrived in August 2017.

Our baby girl is here💗 sweet Ada James Akins came into the world at 10:28 last night after almost 36 hours of labor (only Jesus got me through that-& she is sooo worth it😭💛). She weighs 7 pounds 3 ounces and is so stinking cute I just can't take it! We are all doing well now, just resting. Thank y'all for your prayers-she is a miracle and God is so good. Thomas Rhett and I are so in love with her. And Willa Gray is so excited to finally have a baby sister 😘 More pics to come, so get ready haha

“Our baby girl is here,” Akins captioned an adorable photo on Instagram. “Sweet Ada James Akins came into the world at 10:28 last night after almost 36 hours of labor (only Jesus got me through that-& she is sooo worth it). She weighs 7 pounds 3 ounces and is so stinking cute I just can’t take it! We are all doing well now, just resting. Thank y’all for your prayers-she is a miracle and God is so good. Thomas Rhett and I are so I love with her.”

We may have thought they couldn’t get any more adorable than they were at the ’16 CMAs when Rhett took home the award for single of the year for “Die a Happy Man,” but we were totally wrong. This sweet duo just keeps growing on us.

More: These 23 Celeb Marriages That Have Lasted Are Defying All the Hollywood Odds

1. They just adopted a little girl

YALL 😩🙌🏼😭💗 Our baby girl is hommmmeeeeee 🎈🇺🇸💙🇺🇸🎈 Thank you Jesus for bringing our family together on the same continent finally 🙂 little cutie Willa Gray Akins came home yesterday after completely stealing our hearts in Uganda over a year ago & we're sooooo happy we just can't stand it 💛💛💛💛💛💛💛💛💛💛💛💛💛💛💛💛💛💛💛💛💛💛💛💛💛💛💛💛💛💛💛💛💛💛💛💛💛💛💛💛💛💛 • • • **PARENTS OF THE YEAR: thank you mom & dad for bringing her home since this pregnant mama is officially grounded due to baby Akins #2 coming in August 😩💚💚 • • • **FRIEND OF THE YEAR: thank you sweet @kaileydickerson for capturing some of the most special moments for us & for traveling with me to Uganda and back😘💗💗 • • • ** our FRIENDS & our FAMILY OF THE CENTURY: y'all have walked through and prayed through every single moment of this adoption with us, were our ROCKS through it all, kept it a secret, and truly had faith & hope for us when we felt like we had none left. I could cry thinking about each one of you-y'all know who you are & we are beyond blessed with our community God has given us🙏🏼 we love y'all more than any words could come close to describing. I might just throw you all a giant party celebrating y'all 😭😭💪🏼🙌🏼😘😘😘😘 • • • BRB STILL FREAKING OUT OUR DAUGHTER IS HOME 🇺🇸🇺🇸🇺🇸😩🌈👼🏾💪🏼🎉🙏🏼😭🙌🏼💚🎈💗💗

In fall 2016, Rhett and Akins began the process of adopting a child from Africa, and in May 2017, they finally brought their baby girl home.

“YALL… Our baby girl is hommmmeeeeee,” Akins captioned a sweet set of photos on Instagram. “Thank you Jesus for bringing our family together on the same continent finally 🙂 little cutie Willa Gray Akins came home yesterday after completely stealing our hearts in Uganda over a year ago & we’re sooooo happy we just can’t stand it.”

And what does Willa Gray think of the new arrival?

“Willa Gray is so excited to finally have a baby sister,” Akins wrote on Instagram.

2. Their pregnancy announcement was adorbs

OH BABY! 😍 actually…BABIES! Our hearts are exploding with happiness for y'all to meet our new baby who we are bringing home from Africa soon🙏🏼🙌🏼 who is also going to have a little brother or sister because, SURPRISE! there's a sweet baby in my belly too 💛💛 #adopting&pregnant #cominginhot2017

Just a couple of months after their adoption announcement, they discovered that Akins was pregnant with Ada.

“OH BABY! actually…BABIES!” Akins captioned a pic on Instagram in February. “Our hearts are exploding with happiness for y’all to meet our new baby who we are bringing home from Africa soon who is also going to have a little brother or sister because, SURPRISE! there’s a sweet baby in my belly too.”

If that isn’t the sweetest thing you’ve ever heard, we don’t know what is.

3. They’ve known each other since first grade

Just in case you didn’t think this pair could get any cuter, get this: Rhett and Akins have known each other since they were around 6 years old! Ain’t that a song just waiting to be written.

From the bottom of my heart … thanks y'all. We did it! #ACMs #dieahappyman

…but they broke up. Rhett told Taste of Country that he and his wife, then Lauren Gregory, dated for six months when they were 15. Sadly, it didn’t work out then. They stayed friends and wound up dating other people. “I don’t think she really noticed me till we were 16,” Rhett said. “When I heard that she had ended her other relationship, I moved in for the kill. We kissed, and that was it.”

5. He can thank his father-in-law for getting them back together 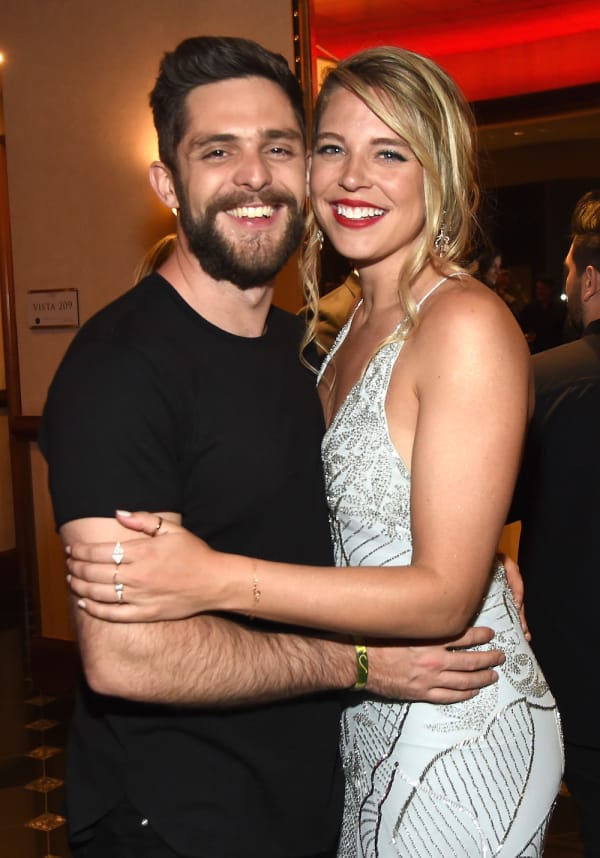 More: How These 15 Hollywood Couples Fell in Love

6. They got engaged around Christmas

3 years ago today by the grace of God @laur_akins married me. I could not be happier than I am right now. Here's to many more! Love you babe

“There was a [wine] bottle, and with a silver Sharpie, I wrote, ‘Marry me?’ on the bottle, and she wrote ‘Well, duh, yes’ on the bottle,” Rhett told radio station Y108. “Somebody cued ‘The Way You Look Tonight’ by Frank Sinatra, and we danced in this little cigar room. It was pretty awesome.”

7. They wed in October 2012 outside of Nashville, Tennessee

And yes, there’s a video of their wedding. Dying.

8. She keeps him humble

Just because Rhett is a country superstar, that doesn’t mean it’s all about him. “I’ve even come home a lot of the time and talked about what I did on the road and what songs I’m gonna cut, and then I realized I haven’t even asked my wife how her day was,” Rhett told Taste of Country. “So I think this business can be very consuming for some people. But thank goodness that my wife is there to call me out every single time, so my head shrinks a little bit.”

9. He made a YouTube video of their fairy tale

Well, if you watch the video, you’ll see that it wasn’t all a fairy tale. Rhett and Akins spent a long time being friends while he tried to win her over. But, in the end, love prevailed. So cute!

10. He had to persuade her to be in his video

Rhett’s “Die a Happy Man” video features his wife (and himself) in Hawaii, being all loved up. However, Akins wasn’t super keen on being in the video at first.

“It took a lot of convincing to get her to do it,” Rhett told Billboard, despite the fact that she’s the inspiration behind the hit song.

“We were in the car, and Tim McGraw’s ‘Just to See You Smile’ came on,” Akins recalled. “I was like, ‘Babe, people don’t write songs like this anymore. It’s so sweet — it just melts your heart. Write a song like that! About ­something besides whiskey, beer or taking a girl home in a big truck.'”

And thus, “Die a Happy Man” was born.