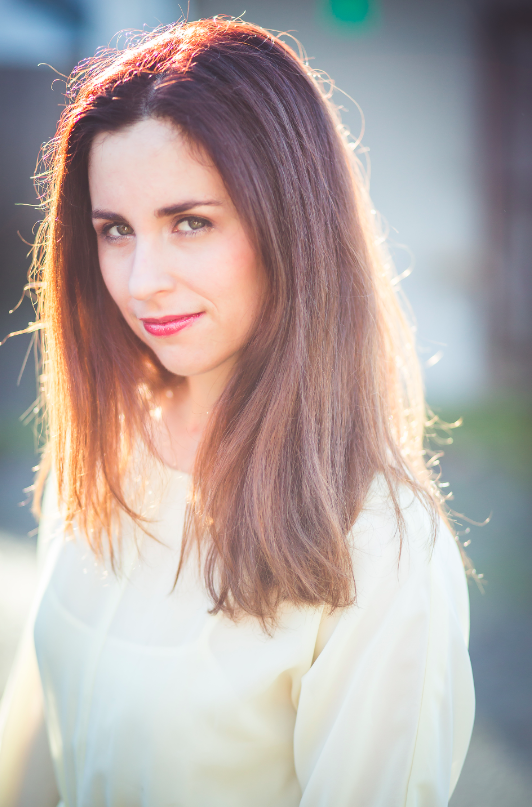 About two years ago, I realized I wasn’t reading work by women. Why not? I had a deeply ingrained belief that women’s voices weren’t interesting. I trusted the male’s voice, so that’s the one I listened to, the one I read. Does the woman’s voice have something unique, and maybe even needed, to offer? As I worked towards healing my own relationship to my voice, a voice I was getting tired of disregarding, distrusting and disrespecting, I started asking myself those questions.

I actively started looking for female authors — albeit tentatively at first. It didn’t take long for this little exercise to pick up momentum. A symphony of new voices, with perspectives I desperately needed, began to fill my life.

What I learned was that the best way to find empowerment in my own voice was to empower the voices of my fellow woman through really listening and being genuinely curious about their understanding of the world — recognizing their perceptions, ideas and opinions as being both valuable and important.

The following list includes biographies, autobiographies, personal letters, diaries, memoirs, works in psychology, philosophy and theology, poetry, plays and one straight-up fiction novel — all by women. I am a compulsive note taker, so I included an excerpt that especially resonated with me from each novel.

1. Not That Kind of Girl: A Young Woman Tells You What She’s “Learned,”

I picked up this book at a time when I was basically killing myself trying to be perfect — because for some reason I thought perfection would solve everything in my life. In Not That Kind of Girl, I discovered a very special reassurance: Being a woman can also mean being a human, and humans make mistakes and are still okay. This was also the first time I heard sex talked about by a woman in a way to which I could actually relate.

“There is nothing gutsier to me than a person announcing that their story is one that deserves to be told, especially if that person is a woman. As hard as we have worked and as far as we have come, there are still so many forces conspiring to tell women that our concerns are petty, our opinions aren’t needed, that we lack the gravitas necessary for our stories to matter. That personal writing by women is no more than an exercise in vanity and that we should appreciate this new world for women, sit down, and shut up.”

2. I am Intelligent: From Heartbreak to Healing — A Mother and Daughter’s Journey Through Autism

by Peyton Goddard and Dianne Goddard

This book was a surprise for me. I stumbled upon I Am Intelligent accidentally, and it continues to be one of the most impactful books I’ve ever read. Told primarily from the perspective of Peyton’s mother, this book is about Peyton’s rediscovery of her voice through facilitated communication after her autism diagnosis.

“When we are afraid to be who we really are, then we retreat. We get tired of the internal war, the combat inside ourselves, and it wears us out. All we want to do is withdraw. The only control we have is whether we are going to be ourselves or not — to follow our heart as long as it brings no intentional harm to another being.”

I wanted to throw this book across the room several times while reading it. Addiction to Perfection is a dense read, but if you struggle with perfectionism, I can’t recommend it enough, although it might touch a nerve — much like it did with me.

Woodman included many pieces from women she worked with as a Jungian analyst. This is an excerpt is from one of her patients:

“i didn’t know who I was
i was too terrified to know
for i somehow felt
that what i was, at my core
was intrinsically evil

when i looked into the mirror
the terror was that no one would be looking back
the soul was not there
i was an empty shell.”

4. Why Be Happy When You Could Be Normal?

This memoir is about Winterson’s chaotic relationship with her adopted mother, her homosexuality and her realization that she wanted to be a writer (something that felt impossible).

“Herman Hesse called suicide a state of mind — and there a great people, nominally alive, who have committed a suicide much worse than physical death. They have vacated life.

I did not want to vacate life. I loved life. I love life. Life is too precious to me not to live it fully. I thought, ‘if I cannot live then I must die.’

Later that night, lying on the gravel and looking up at the stars — the miraculous stars and the wood that deepens the dark — I could hear a voice. I know I was having a hallucination but it was the hallucination I needed to have.

… I understood something. I understood twice born was not just about being alive, but about choosing life. Choosing to be alive and consciously committing to life, in all its exuberant chaos — and its pain.”

5. In the Slender Margin: On the Intimate Strangeness of Death and Dying

I had the incredible privilege of getting to talk to Joseph one-on-one over a coffee. We talked about writing and about the impact it had — writing, not coffee — on our lives. What’s interesting about her story is that she turned away from writing for 30 years while working in hospice. But this writing impulse lingered in the background, until finally she decided to satisfy it. I’m very grateful for that — and for In the Slender Margin.

“From the old English hopian, meaning “to wish, expect, look forward to something,” hope allows us to imagine a future. On the other hand, if we’re not careful, if we’re too focused on what we want to happen, we can miss what is happening right in front of us. Hope can be a thief. It can steal the present moment right out from under our feet.”

More: 11 history books on fierce women you didn’t read about in school

6. The Best of It: New and Selected Poems

I love poetry. It was the first medium I explored as a writer. I feel as though we’re taught to be intimidated by poetry in school, and I’d like to challenge that belief. Poetry should be first and foremost enjoyed, not analyzed.

Ryan’s entire collection is beautiful, but this poem specifically stood out to me.

It’s not the Cat,
it’s the smile that
lasts, toothy
and ruthless.
It’s facts like this
we like to resist —
how our parts
may lack allegiance
to the whole;
how the bonds
may be more casual
than we know; how
much of us
might vanish
and how well
some separate part
might manage.

7. Marilyn: The Passion and the Paradox

Around my bedroom mirror at home, I have photos of women I admire. Marilyn Monroe is one of those women. She was an incredibly strong and resilient person, and her story was one of the first that led me to examine my relationship to my body. Marilyn: The Passion and the Paradox is a fascinating look at her life.

“A lot of people like to think of me as innocent, so that’s the way I behave to them. If they saw the demon in me, they would hate me… I’m more than one person, and I act differently each time. Most of the time, I’m not the person I’d like to be — certainly not a dumb blonde like they say I am, a sex freak with big boobs.”

I adore Sylvia Plath. Letters Home is challenging to read, as in 1963 Plath committed suicide. (Marilyn also has a tragic ending.) You’re essentially reading about the demise of a person’s sense of self — and hope. But Plath was an ever-questioning and exceptionally wise soul, and I have found her perceptions about life, creativity and love exceedingly valuable.

Excerpt (I have this posted on my wall, and I read it nearly every day)

“Gone is the simple college cycle of winning prizes, and here is the more complex, less clear-cut arena of life, where there is no single definite aim, but a complex degree of aims, with no prize to tell you you’ve done well. Only the sudden flashes of joy that come when you commune deeply with another person, or see a particularly golden mist at sunrise, or recognize on paper a crystal expression of a thought that you never expected to write down.”

Many of the women Norman portrays in her plays are preoccupied with their voice — a preoccupation I can obviously relate to. In addition to the plays, what I found especially valuable about this edition are the transcriptions of three keynote speeches she made.

Excerpt from one of those transcriptions:

“I was drowning in a sea of misconceptions about what an artist was, what an artist did, and who could play a part of the cultural life of our time. At the time, I thought of artists as a rarefied group of very special individuals. Like the best club in the world. And the hardest to get into. I didn’t know I was already in.”

Writers will probably be especially interested in this book. What I loved most about A Writer’s Diary was how Woolf negotiated her relationship to her voice. Some days she hated it, some days she dared to love it, but never did she stop expressing it. This story has a tragic ending, too, as Woolf committed suicide in 1882. I love her strength and her insatiable desire to find a way to express herself in the most clearly authentic way.

“And for the hundredth time I repeat — any idea is more real than any amount of war misery. And what one’s made for. And the only contribution one can make — this little pitter patter of ideas is my whiff of a shot in the cause of freedom. So I tell myself.”

“Poets will be. When woman’s infinite servitude is broken, when she lives for herself and by herself, man — abominable until now — giving her freedom, she too will be a poet! Woman will find the unknown! Will her worlds of ideas differ from ours? She will find strange, unfathomable, repugnant, delicious things, we will take them, we will understand them.”

I just finished reading The Awakening. After being published in 1899, the story was censored (although not banned) and considered highly immoral. Now it is considered an important piece of feminist literature. The story follows Edna’s discovery of her voice — sexual, creative and wild.

“… the beginning of things, of a world especially [because Mrs. Pontellier was beginning to realize her position in the universe as a human being, and to recognize her relations as an individual to the world within and about her] is necessarily vague, tangled, chaotic, and exceedingly disturbing. How few of us ever emerge from such a beginning! How many souls perish in its tumult.