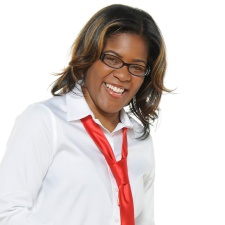 TaJuan “TeeJ” Mercer was one of Hollywood’s hottest TV editors for 20 years. Impacting the lives of millions through her storytelling, TeeJ has spent time with ABC, NBC, MTV, WeTV, The Style Network, HGTV, Bravo and the Walt Disney Company with beginnings on the entertainment magazine hit Extra and the long-running The Tonight Show with Jay Leno.

At work, Mercer was powerful and in control, but at home she discovered she was sleeping next to C.R.A.Z.Y. every single night. “While I suffered from physical abuse, those scars healed fairly quickly. It was the verbal abuse that slapped, hit and punched my psyche and took me longer to bounce back from,” she says.

Mercer eventually ended her marriage and is now on a divine mission to empower other women to do the same. A bestselling author, Mercer recently published The 6-Figure Battered Wife: My Path to R.E.S.I.L.I.E.N.C.E. in an effort to wake up victims of verbal abuse before that abuse translates into physical violence — or something even worse.

Between her countless appearances on some of the country’s hottest radio and TV stations, including Fox News, I had a chance to talk with the busy bestselling author about why she wrote the book and how she hopes it will take women who are in abusive relationships from victim to survivor and, ultimately, to thriver.

SheKnows: What was the darkest moment you had to relive when writing the book?

TaJuan “TeeJ” Mercer: In the middle of me grieving the daughter I miscarried, my ex yelled, “You dirty bitch! That’s why you can’t have children!” Or when he wrapped a tape measure around my throat and the only thing that saved me was when it broke. But now that I’m a thriver, it’s almost like the craziness happened to someone else.

SK: Without giving away too much of the book, what can readers expect?

TM: First, it’s not a memoir. I did not want the book to be just about me. It had to have teachable moments where the reader, man or woman, could either relate firsthand to the stories or gain a deeper, more compassionate understanding about what their loved one may be experiencing. So I walk you through the phases of how verbal escalates to physical abuse. The reader will hopefully understand how Janay Rice could still marry her then-fiancé, NFL player Ray Rice, even after he punched her in the elevator.

SK: So what advice do you have for other women who’ve got it going on in their careers but may be sleeping next to C.R.A.Z.Y. every night?

TM: It’s not always easy to recognize the abuse, so here are five questions I want you to ask yourself to determine if you’re sleeping next to C.R.A.Z.Y.:

If you answered yes, it’s time to wake up. Verbal abuse is an insidious killer. I know you don’t want to be considered a victim. I know you’re accustomed to succeeding and quitting is not in your vocabulary, but listen to me: You. Cannot. Fix. C.R.A.Z.Y.

The 6-Figure Battered Wife: My Path to R.E.S.I.L.I.E.N.C.E. is topping the charts in its category on iTunes just two weeks after its release. You can download a free chapter at www.IDontFixCrazy.com.