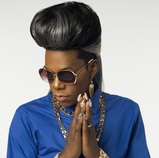 Well, here we are again. This time it’s lovers on the counseling couch.

At least there’s some hope and a light shining down that dark end of the tunnel. Hands outstretched, man, right? Being “100” means there’s nothing we can’t talk about and there’s nothing that’s not out in the open. Total honesty, total trust. Is there any other way? I know you’re probably wondering what happened off-camera during that scene. Well, it was a challenging talk. I know Devon loves me, and I know I love him; but the drama is not worth it sometimes.

Flash, my dancuh, he’s keepin’ it real too; he’s always “100.” He’s open about his adoptive years and how those relationships are working today. And now being able to see his brother after 15 years apart! Can you imagine asking a practical stranger about your life growing up? Strange feeling, huh? But we all have a story to tell, right? That’s why this show really is reality, and I know all of you can relate. You already know I lost my precious mother, Ms. V., last year. But soon, in this very season, you’ll be introduced to my father, Freddie Sr. That’s a big deal — for me, for you. But I don’t want to spoil the details too soon. Just keep tuning in.

More: Big Freedia reveals the celeb she wishes was at the ‘Twerk of Art’ photo shoot

Ms. Tee, recording star all ovuh! Did you see how we hit a tune right there on the spot at the restaurant? Tell me you weren’t dancin’. Then to the studio with Blaq ‘N Mild. I’ve been working with him my whole career. My old manager KT introduced us, when Blaq was just a young kid making beats in New Orleans. He works with lots of Bounce artists, so he is legit.

More: Big Freedia on how difficult it was growing up as a gay artist in New Orleans (INTERVIEW)

The Embassy Block Party was a real highlight of my week. So many young kids in New Orleans are victims of violence; it’s a real serious situation here. This is important to me because I know I can have some impact on kids, and until we really stop this craziness, we are putting all our kids in danger. Like I said, I have had my own brush with violence. I have had a bullet lodged in my arm! You can feel it, and it’s there forever. I was coming out of a club one night and was at the wrong place at the wrong time. I’m lucky to be alive. I would love to see a safer, less violent New Orleans in my lifetime.

What was your favorite part of the episode? Let us know in the comments below.