Candace Cameron Bure’s newest gig starts today, and she’s preparing for a ton of backlash. The outspoken mom and actress is concerned about the comments she’ll face as the new Christian, conservative voice on The View.

Ahead of her new role as a co-commentator on The View, Bure took to her Facebook page on Labor Day evening to lift up a massive prayer request: Send plenty of love tomorrow to help drown out comments from “mean, hateful and downright nasty” liberals, who tend to be the vocal majority when commenting on her previous visits to the show.

More: Candace Cameron Bure opens up about life in Hollywood… as a Christian

“… As I return throughout the season on a more permanent basis, here is what I ask for in addition to your prayers: Please encourage me if you watch the show,” Bure wrote. “Please tag The View on your social media outlets if you have anything kind to say about me or my viewpoint. The majority of the feedback I get from The View audience is from liberals (whom I love) but are mean, hateful and downright nasty toward me. It’s incredibly disheartening to read. And while I know I have the support of many, most of those supporters don’t vocalize it on social media. So all I read and The View hears are the negative and discouraging comments I’m tagged to that call me a vile, discussing, worthless and bigoted human being.” 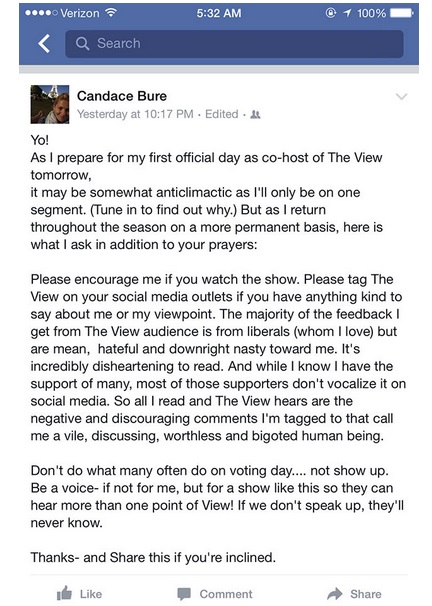 Ouch. It must definitely be hard to deal with such comments on a regular basis. We may not all share her conservative-skewed opinions on things, but we should still respect her right to an opinion. As always, The View has taken the road of finding a table full of women who will mostly clash and argue.

While the concept of delivering different views should be applauded, multiple times in the show’s long history it has seemed as if producers have practically pitted the women against each other. What’s ahead may not always be pretty. However, it’s the natural outcome of putting five wildly different women at a table and paying them to speak their minds on camera.

Hopefully, Bure can find a vocal set of fans to cheer her on. Perhaps she can also learn to shoulder criticism better as she becomes accustomed to the effects of airing your highly contested opinions on national television. Most important, though, we’re all hoping for a world in which people develop hobbies outside of chastising people in the Internet comments section.

More: Are the Olsen Twins returning to Fuller House? Bure weighs in