The Miley Cyrus, Nicki Minaj feud was just compared to the JFK assassination and it’s so ridiculous it couldn’t be ignored.

We generally don’t like to call out other outlets. We’re all for supporting our fellow writers. But this is seriously extreme. (Specifically the last sentence in the first paragraph.)

The assassination of John F. Kennedy was a horrifying day when a president was murdered in public. Minaj calling out Cyrus at the VMAs was two pop stars getting into a little tiff that really means nothing in the scheme of history. It made for an amusing 10-second segment of television that we all should be moving on from at this point.

But it seems that Twitter is also not willing to let this feud go, even though Cyrus really did handle herself like a pro in responding to Minaj. The VMAs host is being trolled on Twitter with the comment “What’s good,” mocking her for what Minaj said during the show.

“Hey, we’re all in this industry,” Cyrus said. “We all do interviews, and we all know how they manipulate shit… Nicki, congratu-f***ing-lations.” She then turned back to her hosting duties with a heavy sigh as Minaj continued to talk trash even though her mic had been turned off.

Check out the whole video of the ladies throwing shade below (NSFW).

Of course, there are also others who are pointing out that the moment could have been staged for publicity, which makes it even more offensive to compare it to a presidential assassination, if that’s the case.

After we published this article, Nylon edited their article, removing the statement that “this is basically our generation’s version of the JFK assassination” since, well, you know, that makes our generation sound superficial and out of touch.

Here’s the screenshot for your reference. 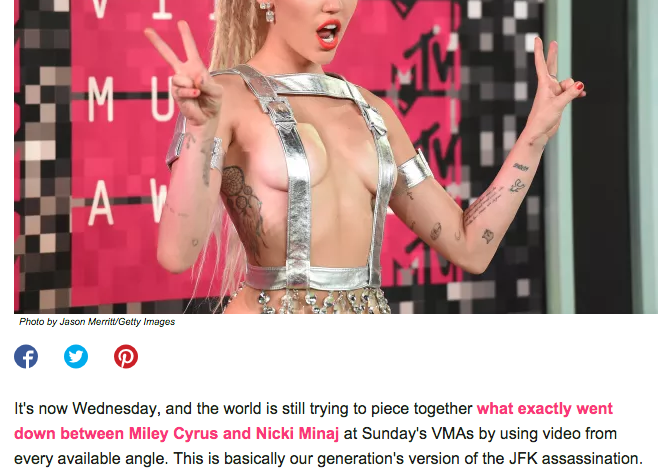 Now, we all say things that we don’t mean to come out like they do. Cyrus perfectly pointed that out in her response to Minaj calling her a “bitch” — and we’re sure Nylon is feeling the same way right about now. So let’s all move on, shall we? Because, really, the point is that this whole situation is so not a big deal.

Do you think the Miley Cyrus, Nicki Minaj VMAs feud moment is being blown out of proportion?