After 10 episodes of secrets, lies, blood and lots of bodies, MTV’s Scream finally unmasked its killer. So, if you’ve yet to watch the Season 1 finale, then read no further, because there are lots of spoilers.

With that said, during Tuesday night’s episode Piper Shaw, the famed podcaster played by Amelia Rose Blaire, was revealed to be Scream‘s big killer. Can you believe it? Did you expect it? Yeah, I think we all pretty much guessed that Piper was not only Lakewood’s murderer but also the half-sister of Emma and daughter of Maggie, aka Daisy.

If you didn’t suspect Piper, then I guess that finale episode was a big shock and right up your dark alley. However, for those of us who had an inkling, well, yeah, the finale fell a bit short. That is, until the very end, when another suspect was sort of revealed. Did anyone else think Audrey, played by Bex Taylor-Klaus, was connected to Piper? Nope, I didn’t. 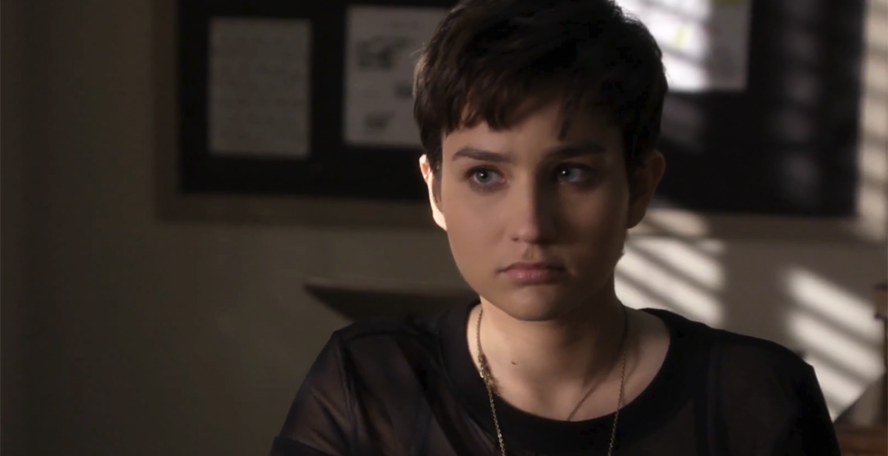 That end moment when Audrey was shown burning letters sent to her from Piper was a very nice surprise, especially after the killer’s reveal. If you give it some thought, it does make a bit of sense. Who attacked Piper and Will? Why was Audrey’s DNA found on the Brandon James mask? So many questions, very little answers.

As all die-hard Scream fans know (yes, that includes me), there’s never just one killer when it comes to this horror story. Thankfully, when Season 2 returns sometime in 2016, we’ll have Audrey’s mystery on our hands to try and solve.

Until then, let’s talk about why Audrey and Taylor-Klaus make a great suspect/possible killer for the sophomore season.

Ever since I first watched Taylor-Klaus on Arrow as Sin, I’ve been a huge fan. She’s amazing and extremely talented, which she proves time and time again on Scream. So, to say I’m excited to see her once again shine is an understatement. If anyone can pull off a convoluted character, who may or may not be a villainous murderer, it’s Taylor-Klaus.

“Sexist much?” That’s what Piper asked Emma at the end of the episode, because, you know, Emma expected a man to be the killer. Nope, women can be villains, too. If Audrey is the “bad guy,” then I’m glad to see Scream is showcasing that women are smart enough and strong enough to take on a powerful role. Oh, did anyone else love that scene near the end that let four women shine as both the heroes and villains? Yeah, me too.

3. Audrey is likable and relatable

Who doesn’t identify with Audrey? From the get-go, she came off as the outcast, “bi-curious” high school student who was bullied for being “different.” If Audrey has done bad things, like being a killer’s accomplice, then fans are probably going to empathize with her, which always makes for a great, complex character — and villain.

More: 7 Reasons Wes Craven was ahead of his time

4. It’s both shocking and saddening

Who wants the beloved Audrey to be a killer? I’m going to say no one. However, that’s what makes for a spectacular twist and show. You never want it to be someone you suspect. So, for Scream to insinuate Audrey might be bad, well, that’s exactly what I want to see. But, does this mean she had a hand in Rachel’s, aka the so-called love of her life, death? Talk about heartbreaking.

With that said, I’m still #TeamAudrey, until I have the full story. Who else is ready to see Taylor-Klaus take on Audrey’s ominous Season 2 story line?