More than a year after the American Eagle-owned lingerie brand Aerie kicked off their #AerieREAL campaign, the company has found its first celebrity spokesperson in 24-year-old Emma Roberts.

Since launching last spring, #AerieREAL has exclusively featured models. Roberts is the first non-model to star in the body-positive campaign, which boasts photos that are completely unretouched — no digital nipping, tucking, airbrushing or tanning allowed.

“We left everything: beauty marks, tattoos,” Aerie style and fit expert Jenny Altman told ABC News when the campaign launched last year. “It’s a selling point because our customers represent this great demographic, and they don’t get to see what girls their age really look like.”

And although such a relevant and necessary concept shouldn’t be revolutionary, sadly, it kind of is.

Roberts, for one, couldn’t contain her excitement over being involved with this inclusive campaign. Sharing several shots from her shoot on Instagram, the actress gushed, “So excited for you guys to see my @aerie #aerieREAL campaign finally!! This photo is not re touched and has no filter!! Remember REAL is sexy. REAL is cool!!”

At the launch dinner celebrating her part in the campaign, Roberts opened up to People about how the message behind the brand fits in with her new life philosophy of embracing that which is real.

“Since I’ve turned 24, I really, like, cleared out toxic people in my life. I only surround myself with people — with work and with friends — people that are going to make me feel confident and make me happy and make me laugh. And so that way, the mean things don’t get to me as much,” she said.

Unfortunately, despite Roberts’ good intentions in spreading a body-positive message, her involvement in the #aerieREAL campaign was not immune to those “mean things.” And while that in and of itself is disappointing, the truly disheartening thing is where the bulk of the criticism was coming from.

In Roberts’ own demographic (and close to it), young girls and women were overwhelmingly supportive. “You go with your bad, natural sexy self. No need for touch ups,” wrote one fan. “So inspiring, finally something REAL again! Thank you for doing this!!” weighed in another.

And it didn’t stop there. From “Thank you for promoting girls to love their bodies!” to “You are such an inspiration,” thousands of comments poured in from young women who saw Roberts’ participation for what it was: an opportunity to help females realize that real is beautiful.

It seems that the audience who really missed the message was the older female demographic. (To think, we wonder where the younger generation gets the “mean girl” syndrome.)

“Funny. For being a ‘real’ ad campaign, she still has 10 lbs of makeup on her face and a strategically placed robe/sweater to cover her ‘real’ skinny body. Whatever makes her feel more confident. I like the message. I don’t like the execution,” remarked one woman.

“She’s a disappointing choice for this campaign. She does not represent ‘real’ body type because she is one of the skinny celebrities,” said another. “Plus most 20-something women don’t really like Emma Roberts as an actress or person.”

“She’s a beautiful young lady, and I applaud her for trying to help young girls accept their God-given bodies as beautiful,” another woman commented, adding, “But I must say it almost defeats the point of the message when those preaching it rarely require the help of Photoshop.”

Only, isn’t it actually statements like this that defeat the message? The message the #aerieREAL campaign is trying to get across is that real is beautiful. The underlying reality of that message is that real looks different for everyone. There is no universally “real” woman.

As far as age or race or — yes, weight — being a factor, I didn’t realize there was a threshold for empowerment. I find the notion that there are physical markers for whether a woman should or should not be celebrated and encouraged to be particularly problematic.

Yes, Emma Roberts is thin. Not unhealthy. Not toeing some extreme. Thin just happens to be one of the myriad body types that exist in the world. As such, I would be willing to wager there are many girls out there who do look a lot like the petite actress.

And, sure, there are plenty others who don’t. We are all aware that a singular woman could not possibly be the embodiment of every body type, right? The hope here is that in seeing Roberts willing to be so vulnerable and real, other celebrity women will be inspired to join the campaign or others like it.

Whatever the desired effect the female commenters above had, it’s that kind of mentality that proves how far we have to go in fighting the stigma of perfection. After all, how will we ever be an inclusive society if every time a woman tries to present her authentic self, we tell her she isn’t enough? 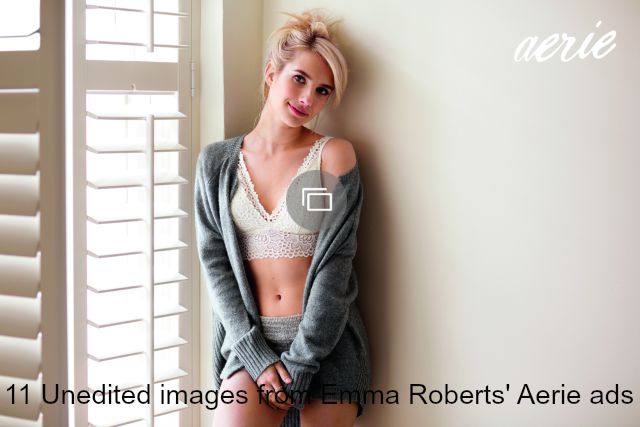