Brittany Leslie, the fourth person eliminated from Face Off, spoke with us exclusively about the tension, fandom and competitive nature of the show.

SheKnows: How did you get on the show?

Brittany Leslie: I work in film, commercials and music videos. I don’t do a lot of special effects makeup. I have a friend of mine who kept saying, “You should do this show. You should do this show.” I kept saying to her, “No. I don’t really do effects makeup anymore. I haven’t really done it since school.” Every time Face Off would put out a casting announcement, she would come to me and say, “Do it. Do it.” For some reason this season, I just decided, why not? It was kind of a whirlwind audition, but all things turned out wonderful.

SK: What are some examples of where viewers may have seen your work before?

BL: Most recently, I just did Marian Hill’s One Time video. I’ve got some big stuff I can’t really talk about yet, unfortunately. But you’ll definitely see more stuff for commercials.

SK: In your last challenge on the show, you worked to create a combined old-age/burn makeup. After you were warned by the show’s mentor that this might be too tough to complete successfully, was there any consideration to change the direction of your character?

BL: No. I had something specific in mind as far as what I wanted to do. I knew how difficult it was going to be to achieve it. But, for me, I kind of thought, let’s keep the risk and try it. Go big or go home. I guess I just kind of went home on that one [laughs]. It’s really tough to do and it was one of those things that you’re sculpting and you can look at it and you can see everything that’s wrong with it, but you’re out of time. You have to get to the mold room. There was never a second-guessing of wanting to change it. There was definitely that moment of I wish I would have done things differently, or [achieved] the same look in a different way that would have been more realistic. It all comes down to time, and unfortunately you just don’t have much of it [laughs]. 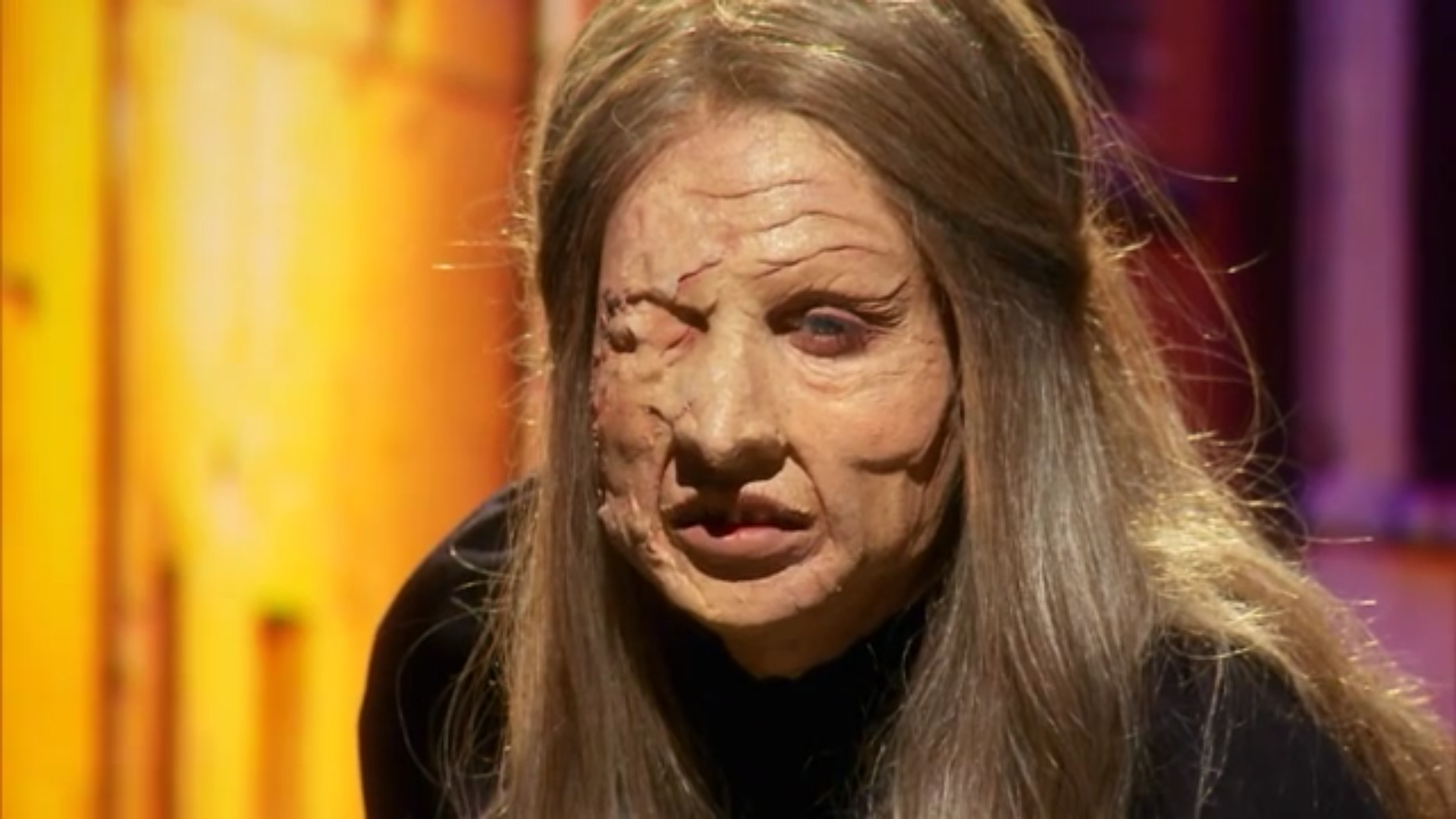 SK: Was there a point in the creation process that you believed your makeup might put you in jeopardy for elimination?

BL: No. When I completed the makeup, there was a point in time that I wasn’t even sure if I was gonna have a makeup go up on that stage. I wasn’t sure. For me, I just wanted to make sure I got a makeup completed and up on the stage. When we got into Last Looks, I was actually really happy that I had a finished makeup. I wasn’t happy with the sculpt, and the paint job wasn’t great. But, I was just happy that it was a completed makeup on that stage. Part of me knew I was on the bottom, especially when [the judges] started the critiques. I really listened to those critiques, and I kind of had a feeling I was going home. I hoped it wasn’t true, but you never know.

SK: When you were standing there in the final moments, did you finally realize your time was done?

BL: I had a feeling. I really did. Meg and Jason both feeling like they were going to go. But like I said, you have to listen to what the judges are saying, and they were incredibly harsh on mine. I had a feeling it was my time to head out.

SK: Among those critiques, the judges said your makeup looked like a stucco wall. Did you actually hear their whisperings while you were there?

BL: No [laughs]. No, I did not. Whenever they’re doing those comments while looking at our pieces up close, we can’t hear anything they’re saying. That’s just between them.

SK: What did you think when you heard that comparison when watching the show?

BL: I don’t disagree [laughs]. I don’t disagree at all. There were a whole bunch of factors that led to that. Sometimes you get a product that you’re not happy with. One bad makeup is not gonna make or break you.

SK: Is there one particular makeup from this season you’re especially proud of?

BL: I’m proud of every piece that I did even though I got sent home, because these are crazy circumstances that you’re put in time-wise. My favorite, I think, that I’ve done is from the 100th episode of my tree sculpt. Everyone does a tree person at some point in their career. It fit what the couple really wanted. I think, for me, he just didn’t look like the block of a tree. I could really see his bone structure underneath, and I tried to keep it that way on purpose… I’m really proud of what we came up with on that one. I think, you know, everybody’s makeups are incredible. Just to see your work up on the stage and on TV is insane [laughs]. 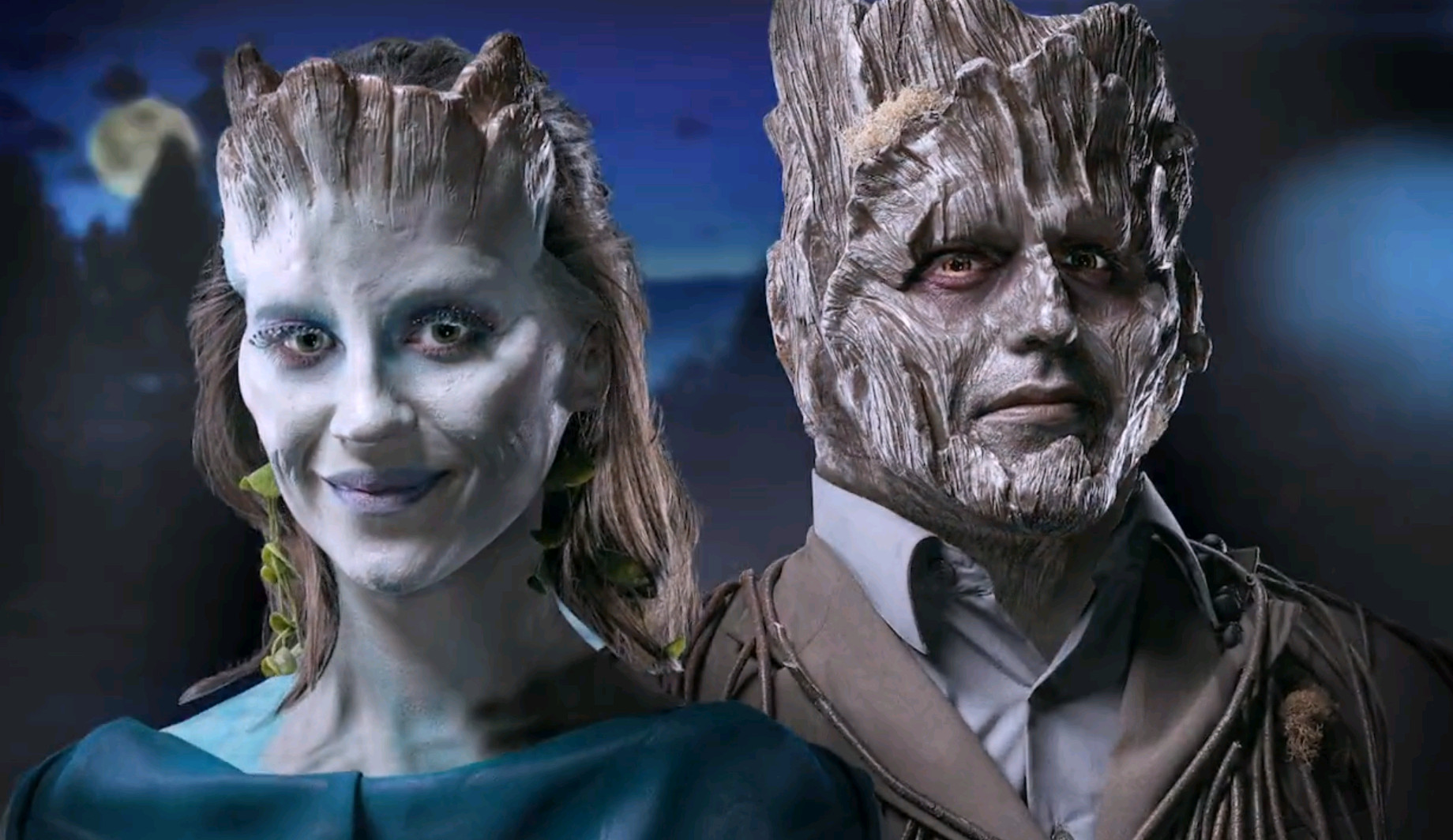 SK: What is that pressure like standing on the Reveal Stage?

BL: It’s the most intense pressure ever because you’re not only worrying if they’re gonna like your piece, but you’re worried if you will be sent home. I think everybody is very protective of their makeup, of their work. Hearing someone rip it to shreds whether it’s deserved to be or not is always difficult. You have to remember these critiques are coming from some of the best artists and innovators in our field, and they’re telling you these things for a reason. It’s definitely stressful. Even going back and watching the episode, I’m sitting there knowing what’s happening. As I was live-tweeting the episode I felt the butterflies all over again. I was like shaking and getting nervous [laughs]. It’s not a pleasant feeling [laughs].

More: Missy angry about her elimination from Face Off

SK: On other competition-based reality shows, the contestants are in it for themselves. But on Face Off, we frequently see you folks helping one another despite the fact it’s truly an individual battle. Why do you think there’s so much friendly assistance in a game where only one person can win?

BL: I think when you get to a certain level with art, everyone just kind of respects everybody. That’s what is so important. Yeah, I went into this as a competition, but at the same time these people are people you’re working with in the field, in your industry. We’re going to see everybody again. It’s a small industry and these people are insanely talented. There have been so many mixed reviews online, but let me tell you that these 15 other artists that I’ve worked with on the show are some of the most incredible artists and people. Even if their work doesn’t show it on Face Off because we have a rushed amount of time, they’re all incredible. I think it’s just a respect thing. That’s why we all want to help each other. Nobody wants to see anybody go home. Everybody wants everybody to have the best work they possibly can within these circumstances.

SK: What’s next for you?

BL: I opened up a private studio in West Hollywood for private clients, celebrity clients, weddings and stuff like that. That’s really exciting. We’re taking a lot of time right now to get that off the ground. It’s kind of a big deal for me. While I continue doing my on-set work, I also now have a place to bring people back if they want a makeup done in private.

SK: Any celebrity names you can drop?

SK: Is there any movie or character in particular that motivates your work?

BL: For effects stuff, I’ve always kind of liked that Tim Burton-esque dark, but fantasy as well. Colorful with an odd tinge of darkness to it. That’s kind of the direction that I’ve pushed a lot of my work [in] since coming out of school for effects stuff. I really find that fascinating.

More: All of Tim Burton’s films ranked and summarized in 140 characters or less

SK: Anything you want viewers to know about yourself that maybe they didn’t get to see on the show?

BL: I’m so thankful that everyone has been so supportive. We have the most amazing fans. It’s incredible. It’s quite the journey, and I appreciate all of the love.

What did you think of Brittany Leslie’s work on the show? Do you think she deserved to go home? Weigh in and let us know.