Operation Harpoon, a Facebook page that bills itself as a “#SkinnyAppreciation” site, has been posting heavily edited photos of plus-size celebrities and models, including Tess Holiday and famous actress Melissa McCarthy, telling followers to use them as #thinspiration, a controversial hashtag often used as motivation and a trigger for women with eating disorders. 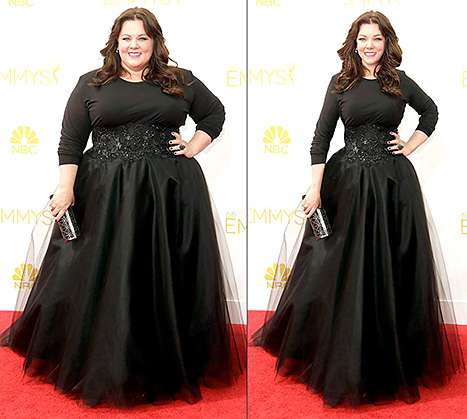 “I think [the Facebook page] is pathetic, and their Photoshop skills are seriously lacking,” Holiday told Us Weekly. “I actually laughed out loud [when I saw the pictures of myself]. The versions of me smaller aren’t even anatomically correct and my limbs are all stretched out like I’m made of Play-Doh. It’s ridiculous.”

Many of the photos, especially those featuring Holiday, are distorted almost beyond recognition. They also come with hashtags like #SkinnyAcceptance and #ThinnerBeauty, as well as rude commentary on the stars and their bodies. A comment appearing on a photo edited to show a super-slim Meghan Trainor reads, “Meghan Trainor might be a lot more popular if she was what the industry wanted her to be! Not all about that Bass [sic] huh?”

But Holiday said she isn’t wasting much time thinking about the page, and outraged fans of the celebs who are featured shouldn’t, either.

“People that do this kind of stuff will never get it,” she said. “They need to work on their own issues and why they have so much hate and anger first. It’s disgusting, yes, but I can’t even take them seriously, and no one else should. Honestly, to me, it’s a joke. To Ashley Graham, Melissa McCarthy, and the other poor people who’ve been mangled by these morons, we’ve never looked worse.”

How would you react if someone Photoshopped your pictures without asking?