The giant, almost golden, chandelier dripped from the ceiling as we made our way across the lobby of The Plaza. Slack-jawed, I fell behind, looking all around me at the intricate trimming and ornate furniture. But the true surprise was the tea room itself: dozens of tables filled with flowers and silver trays.

I almost lost sight of my group of fellow bloggers as I took in the decadent scene before me. So this was the world The New York Times reporter Stephanie Clifford was writing about in her debut novel Everybody Rise. This was the world I was about to enter to interview the author herself.

Stephanie Clifford’s Everybody Rise follows 26-year old Evelyn Beegan as she attempts to navigate the treacherous world of the Upper East Side elite. Despite years of resisting her mother’s social-climbing antics, Evelyn finds herself drawn to the luxurious lifestyle of her former boarding school friends. Then, when she gets a job in charge of the membership for an elite social networking site, Evelyn has to embrace the life of a socialite completely, despite her diminishing funds and the upcoming economic downturn. After years of reporting on the recent recession, Clifford is the perfect person to tackle this in-depth critique of materialistic lifestyles.

And yet, as I was bewitched by the splendor that surrounded me, I couldn’t help but wonder what we were doing there. Yes, a lot of the book took place in this lavish world of high tea and hair blowouts (we had just come from DryBar with newly coiffed hair), but Beegan’s ultimate lesson in the book was that this world was dangerous and not worth the risk. But there we were, caught in the land of fine dining and white gloves that would probably not fit past my fingers. A world that I definitely did not belong in, a fact I was certain everyone around me could tell. 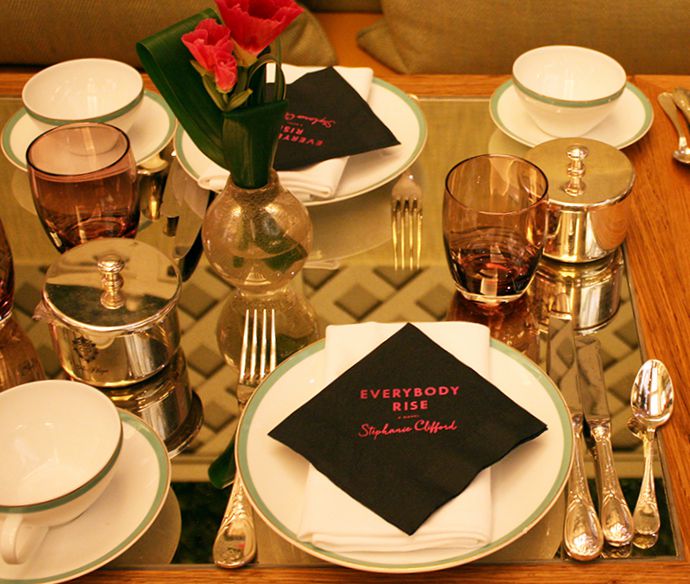 By the time I caught up with the entourage of fellow bloggers, everyone had found a seat around the table. I hovered, anxious to find a chair without disturbing any of the other women, who were settled and chatting away with each other. Eventually, after some rearranging, I was seated, breathing heavily. Suddenly, all the other bloggers lit up with bright smiles — there was Stephanie Clifford. It was at that moment that I realized with horror that I had snagged the best seat at the table: right next to Clifford herself.

The spritely young reporter, wearing a dress the same color as the cover of her book, took a seat and got straight to the introductions. Then, once the tape recorder was set, the interview officially began. Clifford started off with a big caveat: “So, this novel is based in a world that is not mine. I live in Brooklyn, but I did a lot of reporting around the women who live in this world and what it’s like.” My suspicions — or to be honest, hopes — were confirmed: Clifford didn’t feel at home in this world, either.

More: You’re never too old to write your first novel — especially at 40

But her attraction to the world of social climbing in large cities was apparent. She had come to the city years before, and like her heroine Beegan, was seduced by the majesty of Manhattan.

“When I came to New York I had a really hard time. I couldn’t get a job for two years. I was barely making rent. I didn’t have enough money to go out with my friends. I felt like I didn’t see that reflected — like in stories like Sex and the City. It was like cities are so glamorous; they’re so easy.”

After years of reporting and finding her own place in New York, it made sense that Clifford would be intrigued by the Upper East Side elite. So, an event in The Plaza itself made sense, at least somewhat. And apparently, a special scene for Clifford took place in this very tea room. Clifford even said: “It’s sort of fitting with having tea at The Plaza because one of my favorite scenes in the book is Evelyn at age 10 visiting New York with her mom for the first time. Her mom is there to revisit her own glory days, and at tea, Evelyn can’t do anything right. That sort of anxiousness in wanting to please her mom builds a lot of what happens later on, 16 years later when she’s a young woman in New York.”

The pieces were beginning to fit together as I gingerly took a bite of a cucumber sandwich. Or at least, as gingerly as I could muster. This was a pivotal scene in the book, but also a devastating one. Evelyn just wanted to have a magical time in New York with her mother, but was instead caught up in the terrifying politics of museum sponsorship. Despite this painful memory, Evelyn still pursues the life of a socialite with old money, thus proving the strength of her ambition and love for her mother.

As the conversation unfolded, we got to the true heart of the book. Clifford proclaimed: “Everybody Rise is a book about fitting in and figuring out who you are.”

Clifford may have wanted to illustrate the seduction of wealth and aristocracy, but her true interest was the character of Evelyn herself. “She’s ambitious and hardworking. She’s smart, and her ideas for the [elite social networking site] were good. I didn’t want her to have some job she didn’t care about. She wants to succeed.”

More: Why writing a diverse YA novel meant more to me than making a buck

Finally, after I had finally found the courage and awkwardly swallowed a chocolate truffle, I asked Clifford about Stephen Sondheim’s presence throughout the book. At this, Clifford truly seemed to light up. “No, I love him. He was so brilliant about the real New York where there’s heartache, and there’s ambition, when there’s support, and love, and whether in Company or Merrily We Roll Along, which I was listening to on repeat when I was writing this. His lyrics are so clever and fresh, even decades after he wrote them. I thought he captured this sort of yearning for New York in a way that I wanted to, too.”

The heartbreak. The energy. The undeniable life force that is New York City. It was then, as I sipped my tea and prayed that I wouldn’t spill, that I realized why we were at The Plaza. We weren’t conforming to the elitist characters Evelyn has to remove from a pedestal. We were reclaiming the New York Evelyn had dreamed about when she was little. We were exploring the extravagance for ourselves, on our own terms — not trying to impress someone whose approval we so desperately wanted. We were finding our own way in the crowded streets and the guarded parks. Or, as Sondheim would say, in a city of strangers.

Let us know what you thought about Stephanie Clifford’s Everybody Rise in the comments below!