John Stamos got quite the early birthday party extravaganza, thanks to the cast of Fuller House, which hosted a pool party for the actor over the weekend.

More: Fuller House: The Steve and D.J. reunion of our dreams could be happening

Fellow stars of the show, including Candace Cameron Bure, Bob Saget, Jodie Sweetin and Dave Coulier, attended the bash in full force, bringing their families along as well for the pool party fun. Lori Loughlin hosted the party at her Los Angeles mansion.

Stamos’ official 52nd birthday is Aug. 19, but why not start the fun early? Especially when you’ve got a cast of coworkers that are as fun as this bunch appears to be.

Saget captioned this photo, “I’m not sayin’ who but someone in this picture poop’d in the pool @dcoulier.”

Even the cast’s kids got in on the birthday fun. Loughlin shared a photo of the teens gathered around Stamos, including Loughlin’s daughters, Olivia and Isabella Giannulli, and Candace Cameron Bure’s kids, Natasha and Lev Bure.

https://instagram.com/p/6MV1gFOgFz/
When they’re not busy partying away on the weekend, the Fuller House cast is spending their time filming in full swing.

More: Do you remember how Full House ended? We’ve got you covered

Cameron Bure revealed in a recent interview that they’ve already shot two episodes, which will follow the life of her character D.J. Tanner, now a widow with three young children, who asks her sister Stephanie (Sweetin) and her best friend Kimmy (Andrea Barber) for help.

Of course, her lovable uncles Jesse (Stamos) and Joey (Coulier) will be there as well as proud papa Danny (Saget).

The show is set to premiere on Netflix in January 2016. 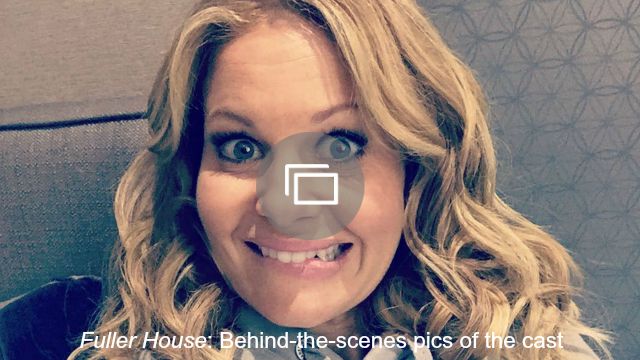