It’s no secret that the Bella Twins are clueless, but they still managed to astound viewers with their ignorance during the latest episode of Total Divas. Sorry, ladies, but the typical Brit does not spend all day drinking tea.

The Bella sisters think they’re trying to fit in, but arguably, all they’re doing is making a mockery of themselves on the streets of Sheffield. They’ve combined one or two stereotypical elements of British fashion with the low-cut tops you’d expect to see on, say, The Real Housewives of Orange County. Meanwhile, everybody else looks like Kate Middleton’s body double. Nikki may know a thing about navigating the usual drama on Total Divas, but she clearly does not know what it means to be a British citizen. Here’s a clue: It does not involve pairing a ridiculous hat with next to no clothing.

The Bellas demonstrate on multiple occasions that they know absolutely nothing about the United Kingdom, but their ignorance is especially apparent when they meet up with Paige for tea. Apparently, real Brits drink gallons of tea, and when they do, they have their pinky fingers frozen in midair the entire time. 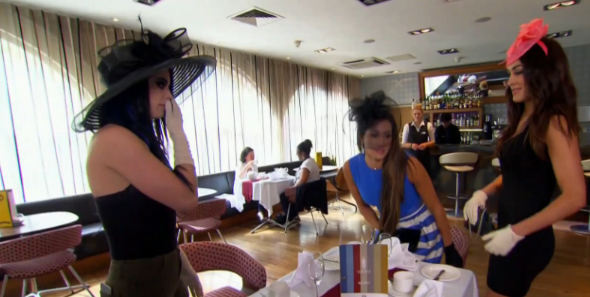 It’s always interesting to see the Bellas and Paige face off, whether that means duking it out in the wrestling ring or arguing over proper teatime etiquette. Paige likes to think of herself as a genuine and somewhat gritty gal, so of course, she’s not pleased when she’s dragged to tea with the Bellas.

More: Nikki Bella and Eva Marie bring the fight outside the ring

The Bella Twins seem to think they are the ultimate authorities on proper British behavior… and they’re desperate to pass on this knowledge to Paige. But what if their fellow WWE Diva simply wants to visit a chippy (also known as a fish and chips shop) and chill out? According to the Bellas, this is not how a true Brit behaves. It’s all about wearing a ridiculous hat, sipping tea and waving your pinky finger in the air. It’s no surprise Paige is so quick to jump ship — who in their right mind would want to deal with such an annoying combination of pretentiousness and ignorance?

Paige was not the only person so over the Bella Twins’ weird fascination with tea. The “peasants” on Twitter also had a field day with Nikki and Brie’s tomfoolery:

Perhaps the worst thing about the entire teatime disaster is Nikki’s insistence that the clearly uncomfortable Paige just enjoy the moment and, if necessary, play pretend. It turns out, there’s a good reason for Nikki’s odd behavior. Deeply ashamed of her background, she is desperate to convince herself that, unlike Paige, she’s not actually one of the “commoners.” Unfortunately, between her ridiculous attire and over-the-top use of British stereotypes, her efforts fall short. There’s no need for Nikki to embrace outdated stereotypes to convince herself that she’s no longer a Hooters gal. Her boobs may be fake, but her personality shouldn’t have to be as well.

What did you think of the Bella Twins’ odd behavior on Total Divas? Leave a comment and share your thoughts!