Although Nikki Reed has been in the industry for quite a while, some people only know her for two things: Twilight and Ian Somerhalder. This is something that needs to change.

Aside from being a stunning and talented actress, Reed is one of the most inspiring people we’ve ever had the opportunity to meet. She has an inner beauty and depth that is not appreciated enough. Reed uses her voice to spread acceptance and promote animal rights, and is unapologetically herself. She follows her heart, educates herself about the world around her and focuses her efforts and talents on educating and inspiring others to get involved. To sum it up, she deserves to be everyone’s girl crush.

For 25 minutes, we sat on the Santa Monica Beach with Nikki Reed before she joined Barefoot Wine and the Surfrider Foundation in their annual Barefoot Wine Beach Rescue Project. We chatted about her coffee preferences (hint: none), biggest fears, philanthropic passions (that article’s to come!) and more. To give you a greater picture of who Reed is when the cameras aren’t on, here’s what we’ve got… for now.

32 Questions about love, life and growing up with Nikki Reed

1. What’s your least favorite exercise? “I don’t have one; I’ll do anything that involves exercise. Bring it on.”

3. Biggest lesson you’ve ever learned? “When I was younger — way, way younger, in my teenage years — I had something that felt really traumatic happen at the time, and I remember my dad telling me to be patient because I didn’t need to be the one holding up the sign with the truth because it always reveals itself.”

5. What’s one recurring dream you have? “I’m not telling you.”

7. What’s one recent fear you conquered? “I feel like I’m continually conquering fears.”

8. What’s one big fear you haven’t conquered yet? “Scuba diving. I just have such a tremendous amount of respect for it so there’s a fine line. My family — they all scuba dive — but I’m always feeling like I’m a guest in the water.”

11. Favorite quote? “I no longer have patience for certain things, not because I’ve become arrogant, but simply because I reached a point in my life where I do not want to waste more time with what diseases me or hurt me. I have no patience for cynicism, excessive criticism and demands on any nature. I lost the will to please those who do not like me, to love those who do not love me and to smile at those who do not want to smile at me. I no longer spend a single minute on those who lie or want to manipulate. I decided not to coexsist anymore with pretense, hypocrisy, dishonesty and cheap praise. i do not tolerate selective erudition nor academic arrogance. I do not adjust either to popular gossiping. I hate conflict and comparisons. I believe in a world of opposites and that’s why I avoid people with rigid and inflexible personalities. In friendship I dislike the lack of loyalty and betrayal. I do not get along with those who do not know how to give a compliment or word of encouragement. Exaggerations bore me and I have difficulty accepting those who do not like animals. And on top of everything I have no patience for anyone who does not deserve my patience.” — Meryl Streep 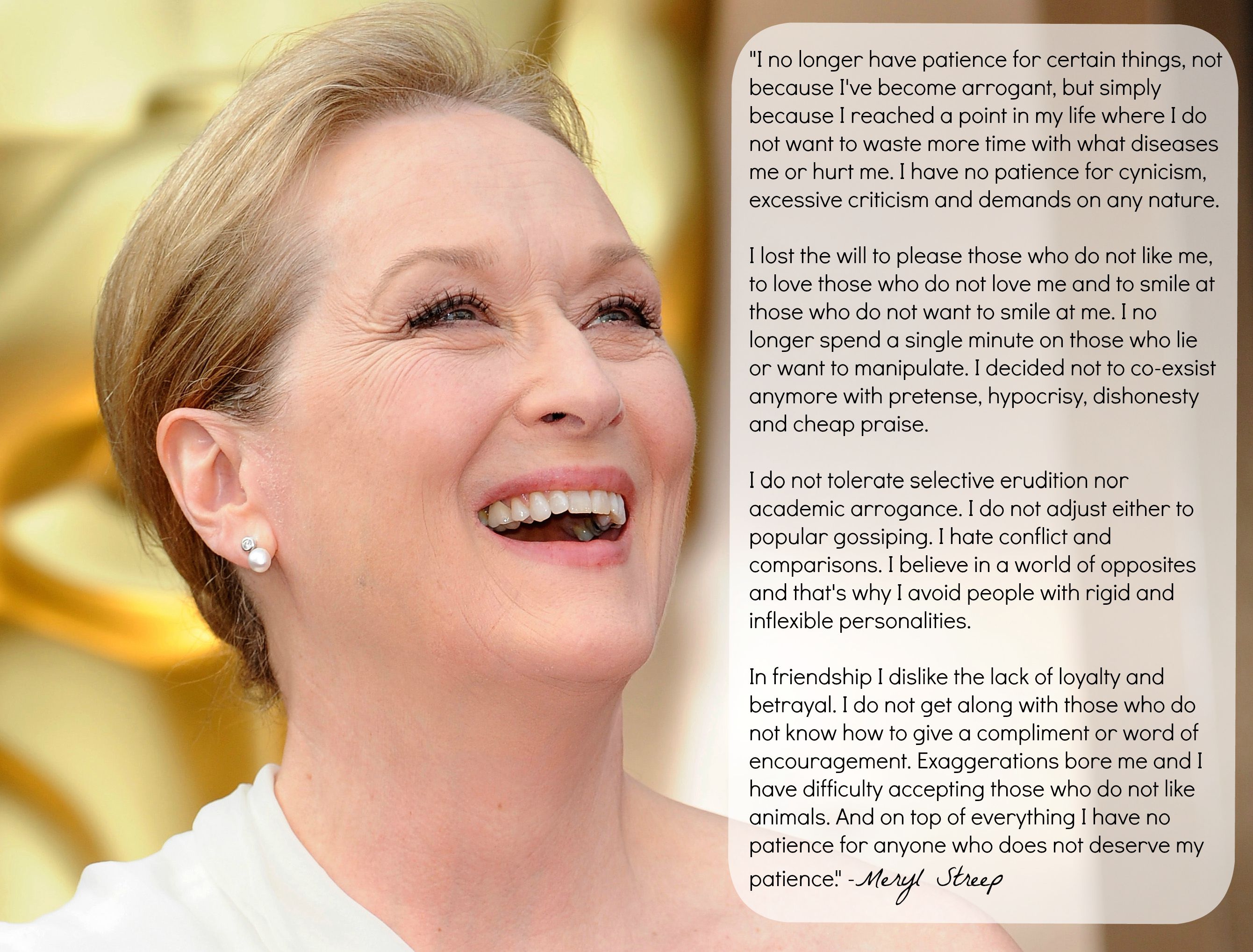 15. Favorite movie in the past five years? “I don’t know… let’s just say Birdman because I saw it three times in the theater.”

17. First job? “I wrote a film called Thirteen; I was 13. It was my first film.” (Fun fact: Reed starred in the film alongside Evan Rachel Wood and Holly Hunter in 2003. It led to Holly Hunter’s first Oscar nomination for Best Supporting Actress. Vanessa Hudgens was also in the film.)

18. Which books are you reading right now? “I’m reading so many books. I just finished… well I was attempting to tackle — and I think I did but it was really intense — Going Clear, which is the Lawrence Wright exposé on Scientology. I’m rereading The Unbearable Lightness of Being, which I’ve read I don’t know how many times, and also Patti Smith’s Just Kids. It’s so phenomenal. So, so phenomenal. It’s like poetry; I just have it by the side of my bed, I’ve read it probably twice. Ian’s going to start so it’s just next to the bed…”

19. Book you read in school that left a lasting impression? “When I was 5 I read Anne Frank: The Diary of a Young Girl and Where the Red Fern Grows. I remember my dad going, ‘Hmm… my kid likes to read.'”

21. Scariest thing about the future? “How little time we have.”

22. If you had a tattoo or were to get a new one, what would it be? “I have 20 and they’re super-personal. I have a few here you can cover [pointing at a white elephant on her arm]. That’s an elephant. I went to Botswana a few years ago and this woman told me that I was an elephant reincarnated.”

24. Who’s one person you’d want to have coffee with today? “My husband.”

25. Favorite curse word? “I do love cursing. It is so fun! It really is, but I don’t know. Something like… outrageous. Actually, when I was little, you know how you want to imitate your parents all the time so you take them totally out of context? So you’re, like, ‘Shit that.’ That’s it [laughs].”

26. Color of your bedroom growing up? “My mom always gave me total creative liberty when I was younger and I could do whatever I wanted. So when I was, maybe 11, in the middle of the night I painted my room purple and then I discovered you could have spray adhesive and spray the walls. This is the kind of kid I was — God bless my mom for still remaining sane. I poured tubs of glitter into a bucket and I painted my room purple and then I sprayed adhesive on the walls and I just threw it at the walls, and my entire room by five in the morning was just purple and glitter everywhere. And then my mom said, ‘You realize that’s never going to stick, so every day you’re going to have to sweep your room.’ I think probably for the next two years people thought that I was wearing glitter makeup or I put glitter in my hair, but it was just because I lived in a room of glitter.”

27. Color of the dress you wore to prom? “I never went to prom. I should go now. Let me know if there’s anyone who wants to take me.”

28. Time you were most nervous? “I was pretty nervous when I testified for BFP, which is the Beagle Freedom Project. I had to fly up to the State Capitol and testify and I was pretty nervous because I’m not great at public speaking unless I’ve memorized something or it feels like I can speak off the cuff. I’m not great at reading pages, but there was no way I could have memorized my testimony. But I also love being nervous, by the way; I welcome nervousness. It means that I’m doing something that takes me out of my comfort zone, so bring it on.” 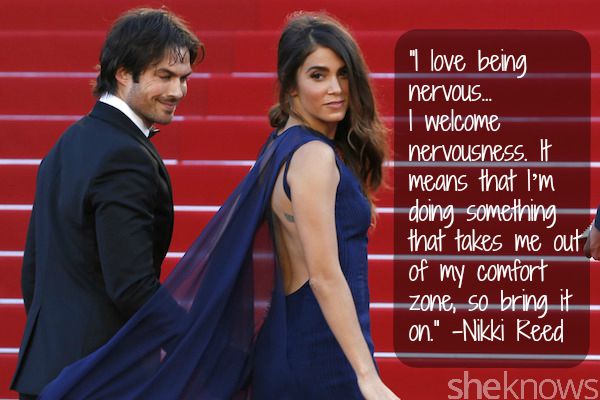 More: Ian Somerhalder and Nikki Reed are the cutest couple, ever (PHOTO)

30. What time is bedtime? “10:45. I never go to bed by 10, but I’m usually asleep by 11, so I just say anytime in between. I like to get up at 5:30 in the morning because I really like watching the sun come up and I also like to exercise — I have really giant dogs and they get hot quickly, and so when I mountain bike or I run, my dogs come with me and I want them to stay cool.”

31. Best physical feature you have? “My eyebrows, maybe. I don’t let anyone pluck them. I do pluck them myself a little bit, but I don’t wax anything.”

32. What inspires you the most? “Probably writing, no matter what I’m writing about, because my writing is always so personal. I always feel really inspired and really energized after. I suppose it’s therapeutic for me, but I also feel really inspired connecting with people and I do that through my writing. I have a new column on Elle, for example, so when I write and then I see feedback and I see how that affects people — not necessarily my writing — but I feel so connected when I write and put something out there.”

Editor’s Note: Nikki encourages everyone to think globally and act locally when they can; everyone can do their part, big or small, to protect our shores. Barefoot Wine will be hosting beach clean ups across the country this summer. You can also support the cause by simply picking up trash you see around your own beaches and posting a photo to social media using the hashtag #BeachRescue. Barefoot Wine will donate an additional $5 to the Surfrider Foundation, up to $50,000, for each post.