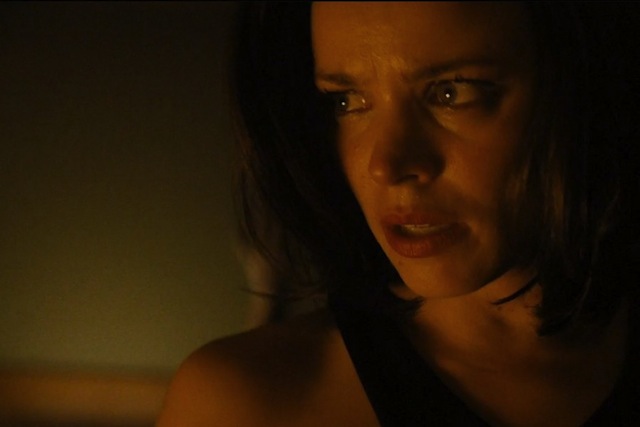 But like many themes in True Detective, this season and last, the focus isn’t as much on the pathology of the criminals as it is on the inner demons of its detectives. This is certainly true for Ani Bezzerides.

We know Ani’s mom is dead and that her father is some kind of New Age guru living in some whacked hippy commune. She barely speaks to her father and her sister, Athena (Leven Rambin), leads a shady existence working in the online sex industry. In a past episode, Ani told Dr. Pitlor this about her father’s creepy compound, “Five kids were living there when I was growing up. Two are in jail now, and two committed suicide. How’s that for social theory?”

Well, we now have a sense of what was going on up in the mountains where no police or Child Protective Services were available.

Forced to swallow a dose of ecstasy or risk exposing her cover, Ani walks through the sex party in a haze, struggling to focus on her goal: to find the missing woman, Vera (Miranda Rae Mayo). But as she sees the fuzzy images of naked women being groped and penetrated by the men who have paid to do so, Ani starts to have flashbacks to her own childhood.

Over atonal orchestral music, Ani’s in the mountains and a long-haired man with a van tells her about a unicorn that lives in the woods. Taking her hand, they go off together under the guise of looking for the mythical creature — implying that a molestation took place instead.

The moment haunts Ani, whose own dark past has led her to this horrible den of sex. Her motivations are pure, and she wants to help protect those most vulnerable to sin and vice. But as she rescues Vera, we can’t help but wonder if Ani can ever truly rescue herself.