How I Met Your Mother‘s Cobie Smulders stars in a new film called Unexpected that profiles two very different women bonding over pregnancy. We sat down with Smulders to find out more. 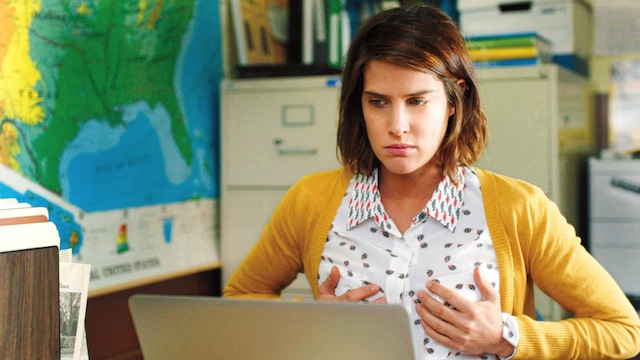 In Unexpected, Samantha (Cobie Smulders), plays a high school teacher in an inner-city school in urban Chicago. When she discovers she’s pregnant for the first time, she finds an unusual ally in her student, Jasmine (Gail Bean), who’s in the exact same situation. While Samantha has trouble letting go of the mentor role she’s used to playing for her students, she finds that she can learn a lot from this fearless teenage girl.

Smulders said she was attracted to the role of Samantha because she really related to what the character was going through. “I had never seen a movie about a woman dealing with [the] psychological aspects of having a child for the first time. I also thought it was interesting that Sam was sort of battling with the idea of becoming a mother and what that means in terms of her identity. Does that mean she’s now a mother and doesn’t have a job? She’s been such a worker bee her whole life. She’s now a mom, and what does that mean? I’m a working mom myself and had similar thoughts. I also really loved the dynamic between these two women.”

At the beginning of the film, Sam starts off in the clear teacher role, with Jasmine as her student. “The teacher has a steady relationship, she has a Master’s degree. She’s older. On paper, she’s the one who should be ready to have a baby, yet the teenager seems more emotionally ready for this next step in her life. I found it interesting to see these two women going through the same thing under very different circumstances, and how they bond together and sort of help each other out and relate to each other in a way they never had before.” 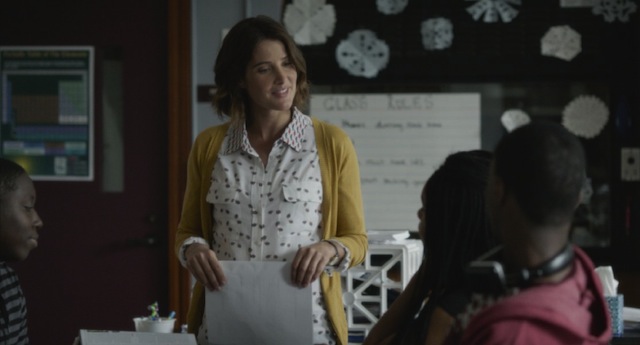 But Smulders admits her character Samantha was quite naïve in her perception of Jasmine’s situation. “She’s a teenager — she can have her baby and raise it, she can also choose it give it up for adoption or she can get an abortion. I think she was expecting Jasmine to be more open to giving it up for adoption or having an abortion, but when Jasmine doesn’t choose either of those options, it’s surprising to her. And I love that Jasmine asked Sam, ‘Well, what are you going to do?’ From Jasmine’s perspective, they’re in the same place. It comes down to every woman’s right to choose. Jasmine sees it as a choice to be a mom or not be a mom. Samantha sees it as, you should have a house, you should be in a relationship that’s stable, you should have gone to school and have all these boxed ticked before having a baby.”

Smulders feels strongly about women having the option to choose how they handle their pregnancy, but says those decisions are extremely personal. “I think it’s different for everybody when you’re dealing with pregnancy. It’s not really for me to comment on what anyone else should do, because it’s a different experience for everyone.”

When it comes to building confidence in her own two daughters, Smulders said, “I hope that empowering my girls is coming from working, being a working mom. It would be nice if that is a lesson they are taking away. But for me, it’s not so much about empowering girls as it is — whether you have a boy or a girl — about communication. Feeling safe to tell your feelings and your thoughts and really have that open dialogue with your kids. Having someone they can talk to about any situation is really important to me. I want to make them feel safe and that they have an opinion that matters.”

While there’s been a lot of dialogue in the media lately about Hollywood’s double standard for men and women, Smulders says she hasn’t experienced it firsthand. “I just shot this beautiful film, and we got it made with a female director and two female writers and a female DP [director of photography], a female producer. I see examples of work like that being done all the time, which is exciting.”

More: How I Met Your Mother creates Inside the Actors Studio shenanigans 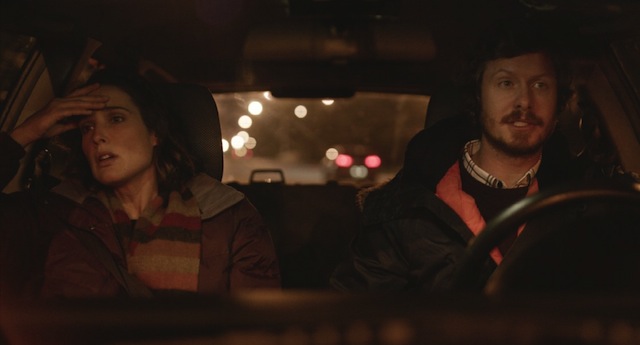 While she has no aspirations to write or direct film or TV, Smulders’ future goals include producing her own content. “There’s a couple things I’m working on now, but nothing concrete that I can even talk about.”

Looks like we’ll just have to wait and see. Her immediate plans are just to get some rest and relaxation. “I have a broken leg at the moment, so I’m just going to heal that up for the next couple weeks and see how certain things land.”

Her broken leg wasn’t the result of any adventurous activity, however. “I fell in my apartment and my body went one way and my leg went the other and it just snapped. It’s really boring.”

We hope you heal quickly, Cobie!

Unexpected is currently playing in theaters.