Donald Trump always seems to have an opinion about everything, and that unmitigated openness has only increased with his presidential bid. All one needs to do to confirm this is take a quick gander at Trump’s Twitter feed.

More: Find out what the cheeky Donald Trump Insulter is saying about your friends

So, seeing as it’ll likely only be a matter of time before he weighs in anyway, we decided to use the far-too-much-fun Donald Trump Insult Generator to see what the ol’ bazillionaire might have to say about some of the major celebrity feuds of the moment.

In his, er, unique brand of response, naturally.

Heaven help the Twitterverse — Nicki Minaj and Taylor Swift have started a Twitter feud. It all began when the Video of the Year nominations for the VMAs were announced and they didn’t include Minaj’s twerk-tastic “Anaconda.” She sent a tweet many view as a thinly veiled dig at Swift, whose “Bad Blood” was up for the award. Swift pointedly responded and the universe has been out of whack ever since. So what would Trump have to say to these feuding pop scions? 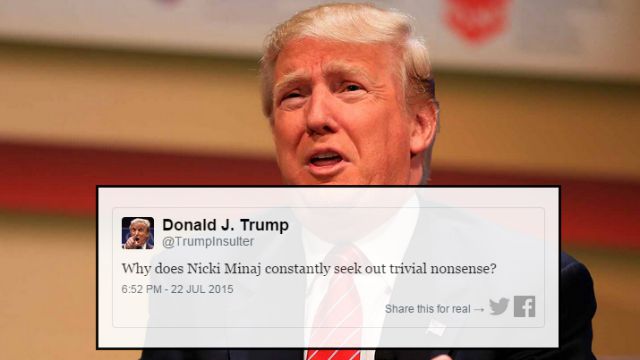 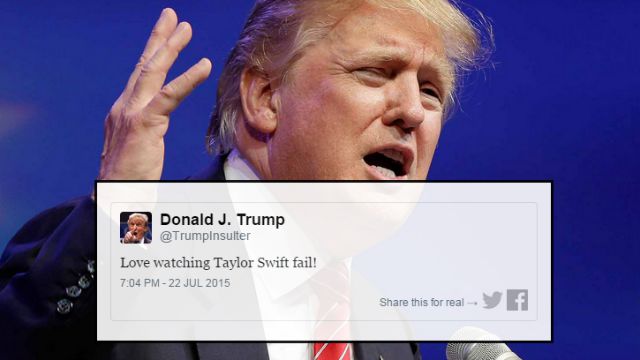 Hmm. Shall we call it a draw?

Katy Perry couldn’t help throwing her hat into the ring for this Nicki Minaj/Taylor Swift throwdown, seeing as she is supposedly the inspiration behind Swift’s “Bad Blood” lyrics. Addressing the heated exchange between Minaj and Swift, Perry tweeted, “Finding it ironic to parade the pit women against each other argument about as one unmeasurably capitalizes on the take down of a woman…” But faux-Trump isn’t having any of it. 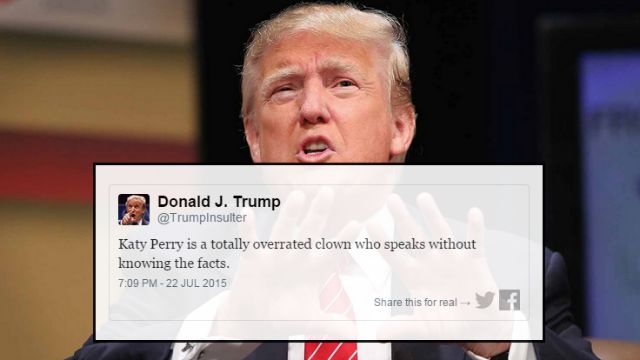 We’re all still a bit broken up about, well, the breakup of country’s reigning king and queen, Blake Shelton and Miranda Lambert. Especially since there now seems to be a bit of a nasty he said/she said war going on between the two over who cheated first. Boo! These two were one of our all-time favorite famous couples. In this bitter split, though, the Trump-sulter appears to be on Lambert’s side. 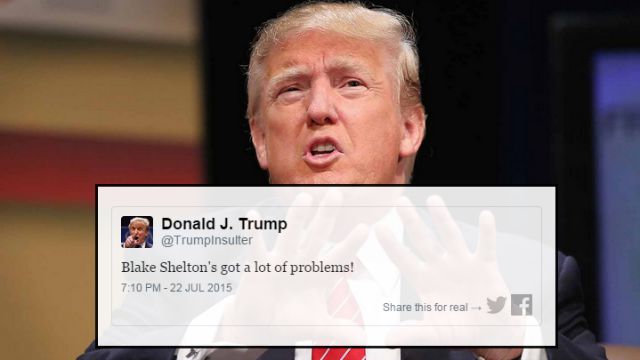 More: 8 Times Blake and Miranda made us believe in happily ever after

Nicki Minaj and Taylor Swift don’t corner the market on musical Twitter tiffs — Meek Mill got fired up earlier this week in a Twitter rant accusing Drake of, among other things, relying on ghostwriters to pen his lyrics for him. Drake doesn’t seem to be sweating it too much, considering he hasn’t so much as acknowledged the accusations made by Mill. We’d say Trump’s reaction to this spat is a toss-up. 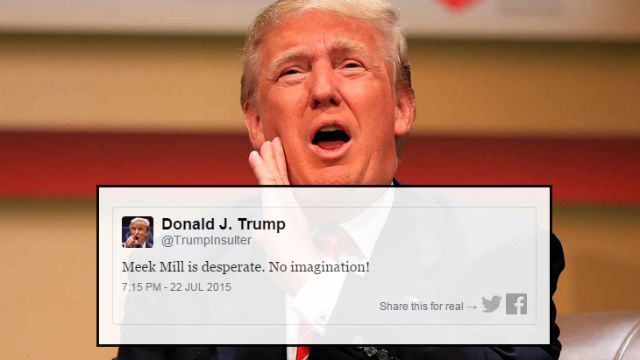 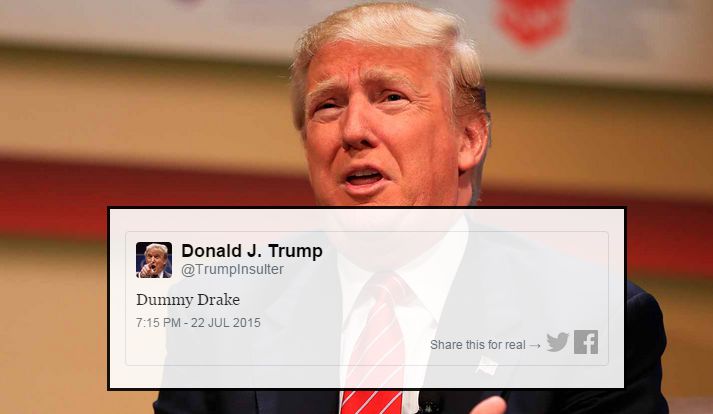 If you were dreading NeNe Leakes and Kim Zolciak’s new reality show spinoff, don’t. Word has it these two Real Housewives couldn’t rein in their divalicious behavior long enough to get a production schedule hammered out. Despite their shared proclivity for hairpieces, Trump would obviously have next to no sympathy for Zolciak. 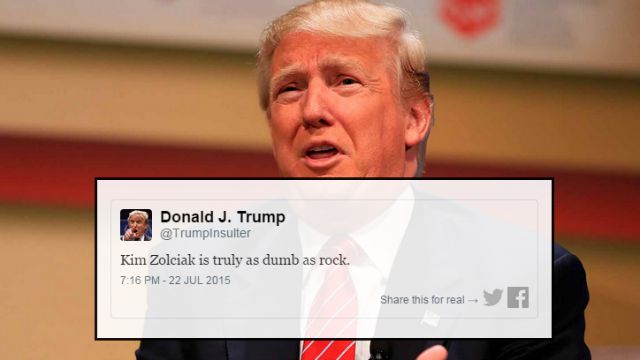 And, um, his response to Leakes is simply nonsensical. 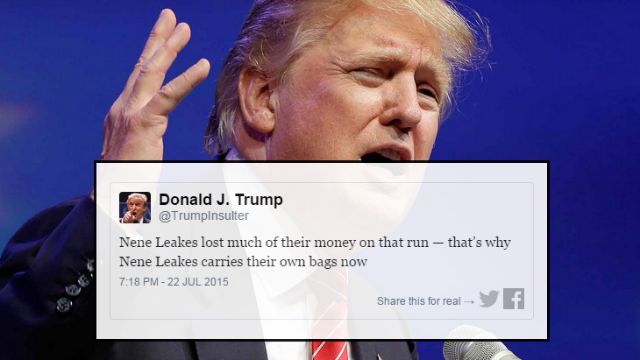 Kylie Jenner incurred the wrath of Hunger Games star Amandla Stenberg when she posted a selfie to her Instagram page sporting some serious cornrows (along with the questionable caption, “I woke up like disss.”) Stenberg accused Jenner of appropriating African American culture for her own gain and perpetuating racism. Jenner fired back, telling Stenberg to “go hang w Jaden or something,” referring to Will Smith’s son and Stenberg’s prom date. The Trumpster? Well…. 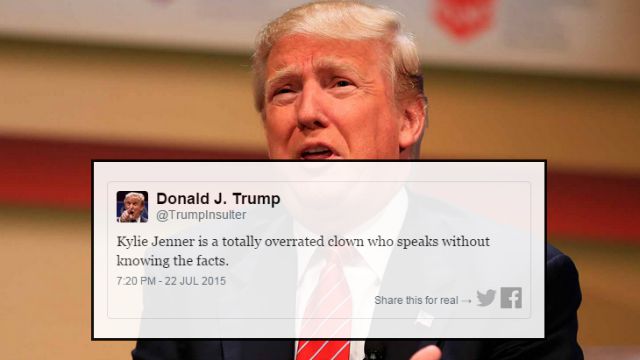 Who doesn’t former Real Housewives of Beverly Hills‘ Brandi Glanville have beef with these days? The beleaguered blonde might just be working her way through the social hemisphere. For one, Joanna Krupa has a defamation suit in the works against the reality star. And, ouch, the insult-slinging Trump doesn’t mince words when it comes to Glanville. 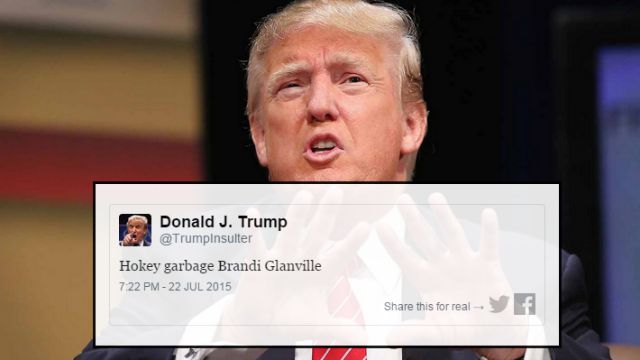 What is hokey garbage, exactly? While we ponder that, live a little and plug your own name into the insult generator.