This is one crazy train that just never seems to stop.

Julia Roberts’ name gets dragged out again when her troubled sister-in-law lands herself in lockup.

Early Tuesday morning, RadarOnline reported that Jyl Moder — the sister of Danny Moder, Julia Roberts’ husband — was booked at the Riverside County jail in Indio, California, and there she stayed on $50,000 bail. Moder was picked up late Monday evening and arrested on felony charges of corporal injury to a spouse or cohabitant. 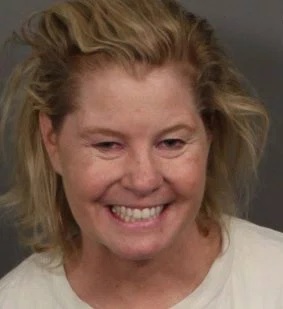 The incident stems, allegedly, from a verbal fight at a local bar, which eventually ended with Moder’s arrest at her home. She faces up to four years in jail and/or a $6,000 fine.

This is just the latest in a long history of strange and erratic behavior from Roberts’ sister-in-law.

Moder, in the past, has blamed Roberts for the death of Patti Moder, Danny and Jyl’s mother. According to a source found by RadarOnline, Jyl blames the Pretty Woman star for causing their mother’s heart attack because she was stressed out over Danny’s affair with Roberts while he was still married to another woman. Jyl has even been reported to call Robrets “Satan.”

We don’t have any further details regarding this latest incident, and the bizarre details lead some to believe there may have been alcohol involved, although that is not clearly stated, and Moder has been reported to have had a problem with drinking in the past. And her sinister, almost crazed mug-shot photo doesn’t help her look any less troubled.

We will have to wait to find out if more details arise from this arrest.