Blake Shelton and Miranda Lambert — country music’s cutest couple — have confirmed the sad news that their marriage is kaput. And, y’all, we’re seriously sad to hear it.

Looking back over their nearly decade-long courtship, we can’t help but think of all the times they made happily ever after in Hollywood seem like more than just a fairy tale. In fact, the twangy sweethearts seemed so over the moon for each other, it was hard to narrow this list of moments they were the perfect couple down to just eight.

When Kellie Pickler called Blake and Miranda up to the stage to accept the Song of the Year award for their poignant “Over You,” the couple was visibly overcome with emotion — especially when Blake confessed he’d been waiting all these years for the right person to write and sing the tribute song with, then pulled Miranda in close, saying, “I love you so much, baby.” So. Many. Feels.

2. When they joined forces to support their fellow country artists

In the wake of the (inexplicable) backlash surrounding country supergroup Little Big Town’s latest hit “Girl Crush,” Blake and Miranda took to Instagram to make a statement. Wearing matching red trucker hats emblazoned with the song title, the couple shared an adorable kiss with the world and commented, “We love @littlebigtown #girlcrush.”

3. When he joined her for a surprise duet of “God Gave Me You”

During the Wichita, Kansas, leg of Miranda’s tour earlier this year, she brought Blake onstage for an impromptu performance of their hit “God Gave Me You” — and, predictably, the crowd went completely wild over it. But really… could they have been any cuter or seemed any more in love?

4. When Blake gushed about Miranda to Redbook 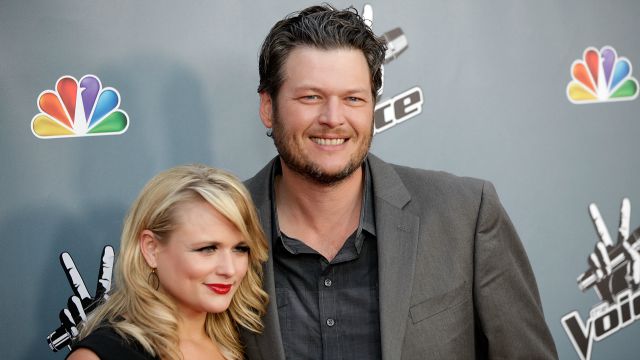 When Blake sat down with People magazine for an interview in 2012, it became quite clear his and Miranda’s honeymoon period was far from over. “I met Miranda, and she was just that girl,” Blake said of knowing Miranda was the one. “I’m screwed now that I’ve met her, because I don’t know who could be better for me, in my eyes and mind. That’s just how she’s always been for me since I met her.”

5. When they first showed off their official couple stage chemistry

While it’s true their duet at CMT’s 100 Greatest Duets Concert in 2005 brought them together, it wasn’t until the pair took the stage in 2009 as an official couple that everyone realized just how much sense it made for these two to make music together.

On May 14, 2011, Blake and Miranda got married in a dreamy rockabilly style rural wedding that convinced us all they were in it for the long haul. They’ve both since gushed about their wedding day, calling it “amazing,” “magical” and more. It was a memorable time in the country cuties’ lives, and hopefully one they can still see clearly as a beautiful moment after they move forward separately.

7. When they celebrated our country in stirring song at the Super Bowl

There was nary a dry eye in the house when Miranda and Blake performed an especially moving rendition of “America the Beautiful” at Super Bowl XLVI in Indianapolis, Indiana. Their voices were totally in sync throughout the performance, and they shared a precious moment immediately after.

More: 5 Reasons other than weight to talk about Miranda Lambert

8. When Miranda talked about them growing old together

In an interview, Miranda spoke about how supportive Blake was and how their life together isn’t about the glitz and the glam. Rather, when all is said and done, “When we are home, we’re just living our lives — it’s not about any of this in that we have a real, real relationship. So when all this is said and done, we’ll still be sitting on the porch, drinking beer and listening to Merle Haggard and still have a foundation we’ve built over the years.”