Brad Pitt was spotted sporting some new ink that appears to honor Angelina Jolie and their six children.

More: 6 Times Brad Pitt got our vote for husband of the year

The proud husband and father’s newest tattoo is located on his right forearm. The design resembles a two-cell chart that spans from his wrist all the way down to nearly his elbow.

At the top of the chart, where you would expect to find the headings, the letter “A” can be seen on the top left with the letters “M,” “P” and “Z” visible on the right. Presumably the “A” is for Jolie, while the “M,” “P” and “Z” are for their children Maddox, 13, Pax, 11, and Zahara, 10. We’re guessing that there are also the letters “S,” “V” and “K” somewhere on there for his three youngest children, Shiloh, 9, and twins Vivienne and Knox, 7.

More: Brad Pitt and kids are adorable at Unbroken premiere

Jolie actually beat Pitt to the punch on honoring their children with a tattoo.

The actress has the longitudinal and latitudinal coordinates of the locations of all of her children’s birthplaces listed on her upper left arm. Maddox was born in Cambodia, Pax was born in Vietnam and Zahara was born in Ethiopia, while Shiloh, who is Pitt and Jolie’s first biological child, was born in Namibia and twins Vivienne and Knox were born in Nice, France. Pitt’s name is also included at the end of Jolie’s list. He was born in Shawnee, Oklahoma.

After dating for nearly a decade, Jolie and Pitt recently made their love official with a wedding in August 2014. But Jolie added the line for Pitt before the two were married, back in 2011. 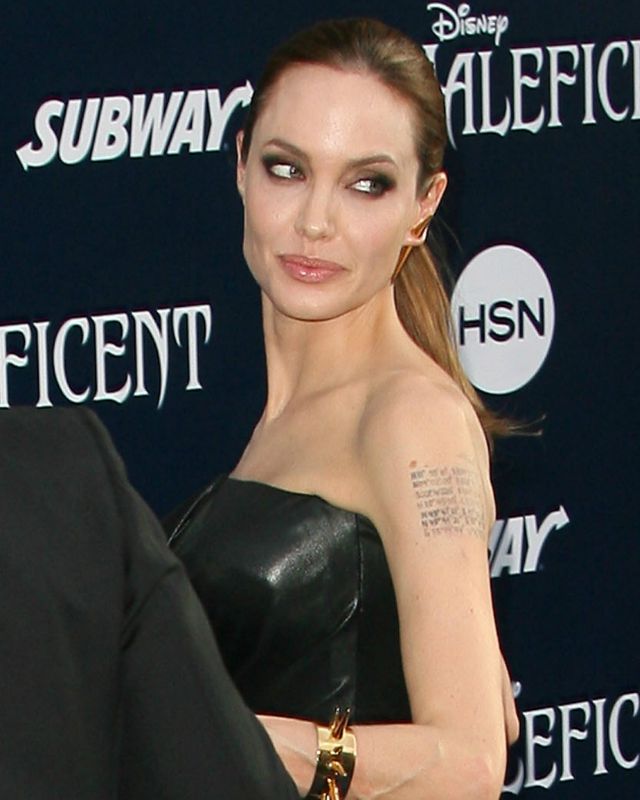 No word yet if Pitt intends on filling in the chart with any information on the significance behind the look.

What do you think of Brad Pitt’s new tattoo?