More: Someone thought Chrissy Teigen had a baby, and she finds it hilarious (PHOTO)

The model called out the photo-sharing network’s policies last week, when snaps she shared from her topless W magazine shoot were repeatedly removed from her profile.

Now, in a photo of her husband’s mostly bare behind, Teigen appears to be calling attention to the sexist nature of Instagram’s nudity policies — she didn’t caption the photo at all, except to tag @Instagram. 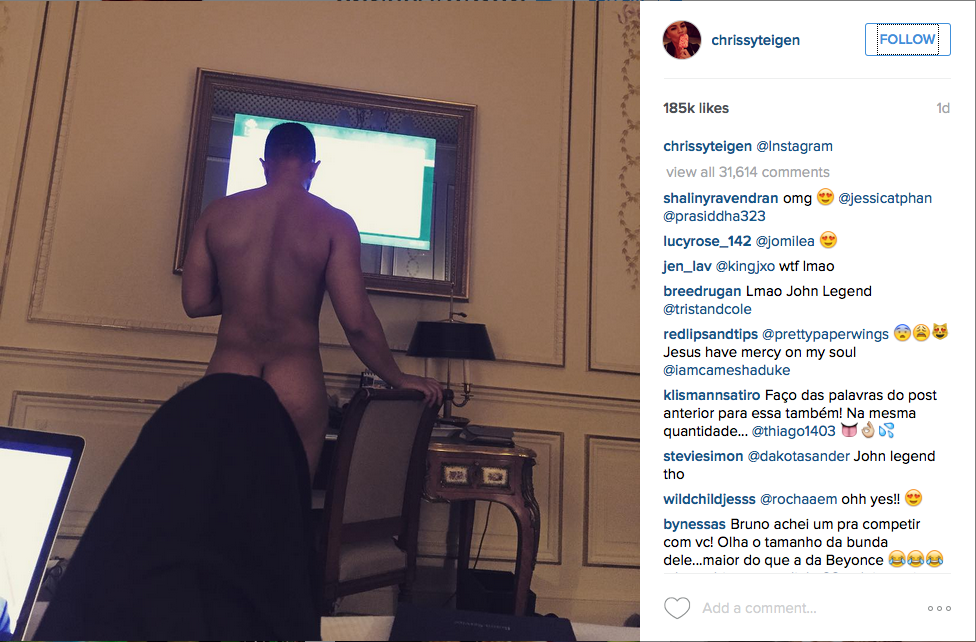 Technically, according to Instagram’s own policies, the picture of Teigen’s hubby John Legend should be removed. But whether it will remains to be seen.

Instagram’s nudity policy was updated in April after the site caught flak for regularly removing images of topless women, even shots of breastfeeding moms and artistic representations of the female form. The site’s “community guidelines” section now reads, “We know that there are times when people might want to share nude images that are artistic or creative in nature, but for a variety of reasons, we don’t allow nudity on Instagram. This includes photos, videos, and some digitally-created content that show sexual intercourse, genitals, and close-ups of fully-nude buttocks. It also includes some photos of female nipples, but photos of post-mastectomy scarring and women actively breastfeeding are allowed. Nudity in photos of paintings and sculptures is OK, too.”

Teigen’s topless shots, which were repeatedly removed, were given filters that made them look like oil paintings and charcoal drawings, but Instagram still took them down.

But since male nipples on Instagram are OK, while female nipples are removed, it seems like Teigen is baiting the site to see whether male butts will be allowed even though female butts are not.

More: Twitter attacks Chrissy Teigen for being “drunk” at the BBMAs

Do you side with Teigen in this fight? Should Instagram lighten up on its controversial nudity policy? Head down to the comments and let us know what you think.