A new video just surfaced that seems to confirm all those rumors that Ariana Grande is a diva, in a huge way.

The singer was caught on tape out and about at a Lake Elsinore, Calif., doughnut shop with her new boyfriend, Ricky Alvarez, and the couple was up to no good.

TMZ has obtained the security footage that shows Grande licking doughnuts that she hadn’t purchased. As in there was a tray of display doughnuts sitting on top of the counter and Grande thought it was hilarious to run her tongue along them. Apparently, that screams of romance, too, because after gracing the fresh doughnuts with her saliva, she and Alvarez begin kissing.

But her ridiculous behavior doesn’t stop there.

When the doughnut shop worker brings out a fresh tray, Grande proclaims, “What the f*** is that?”

Happy Independence Day to you, too?

Now, the absolutely only plausible explanation Grande could give for this strange behavior is that she was being medicated after having her wisdom teeth removed.

This video was taken on Saturday, July 4, and Grande posted this tweet on July 6.

It’s unclear when she had the first one taken out or the final three. If it coincided with her doughnut shop appointment, it could have been a factor. We all know medication can have some weird effects.

More: Is Ariana Grande trying to redeem her image with the ‘One Last Time’ video?

Obviously, we’re just trying to give the singer the benefit of the doubt here, but since her boyfriend is also seen licking the display doughnuts, it’s unlikely the singer has anything or anyone to blame for this embarrassing behavior except herself.

Check out the full video of her in the doughnut shop below.

UPDATE, July 8 at 12 p.m. PST: Grande apologized in a statement to the Associated Press, saying, “I am extremely proud to be an American and I’ve always made it clear that I love my country. What I said in a private moment with my friend, who was buying the doughnuts, was taken out of context and I am sorry for not using more discretion with my choice of words.”

She also tweeted this out: 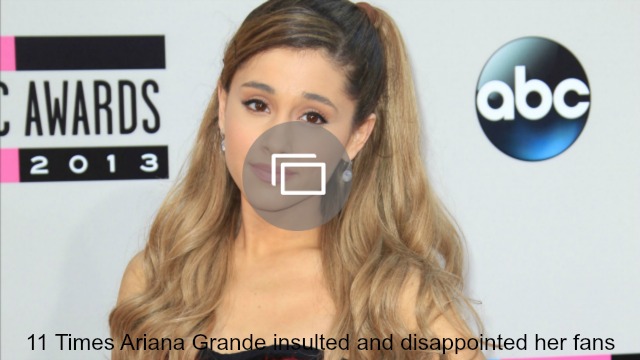