More: Racism in online dating is real, and here’s proof

Her new picture is turning her comeback into another downfall because the photo shows her son Bobby in brownface as Desi Arnaz from the iconic sitcom I Love Lucy. Deen herself is standing next to him in a bright red wig as Lucille Ball. 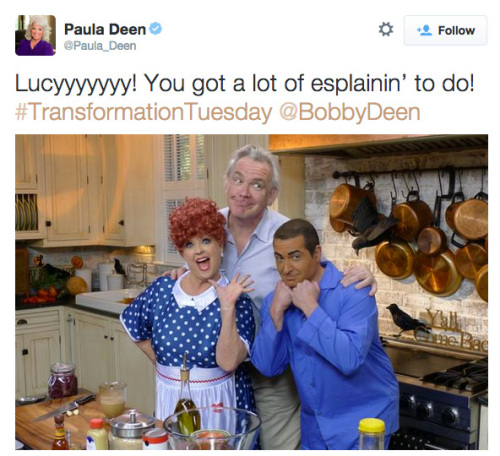 After the almost immediate backlash from the photo, Deen was quick to remove the tweet (she initially left the Facebook post, which has since been deleted too). It read, “Lucyyyyyyy! You got a lot of esplainin’ to do! #TransformationTuesday.”

More: Paula Deen wants you to hear her side of the story — and charge you for it, too

Fans pointed out that it wasn’t Lucy who had some “esplainin’ to do” but Deen herself for posting the insensitive photo.

Now, Deen probably didn’t mean the picture offensively. But after everything she went through back in 2012, which had her branded a racist, you would think the food show host would be a little more aware of what she was sharing with the world.

Admittedly, for a while I was one of those people who didn’t understand what the big deal was around darkening your skin color with makeup. But rather than just assume it was OK, I did my homework, researching online and asking trusted friends. It was explained to me perfectly that blackface only highlights offensive stereotypes and points to a time when Americans would don blackface as a racist representation of those sterotypes. Because of that history, mimicking the behavior is still incredibly unacceptable. And it’s important that we understand the historical implications are still, rightfully, a very current and sensitive subject for many people.

More: Paula Deen wants to be just like “that black football player”

So, while I don’t think Deen and her son meant the costume to be offensive in any way, I do think it highlights her lack of education or effort to be educated, following the racism scandal she went through. And ignorance, in this case, is not an acceptable excuse.