More: Twitter attacks Chrissy Teigen for being “drunk” at the BBMAs

The model is flipping a giant bird to Instagram after the site removed photos of her recent W magazine photo shoot, in which she appears completely topless.

Instagram and the #freethenipple movement have famously butted heads in the past. Other celebrities, most notably comedienne Chelsea Handler, have stood up to the social network’s vague policies regarding nudity in photos. In April, Instagram updated its community guidelines to say, “We know that there are times when people might want to share nude images that are artistic or creative in nature, but for a variety of reasons, we don’t allow nudity on Instagram. This includes photos, videos, and some digitally-created content that show sexual intercourse, genitals, and close-ups of fully-nude buttocks. It also includes some photos of female nipples, but photos of post-mastectomy scarring and women actively breastfeeding are allowed. Nudity in photos of paintings and sculptures is OK, too.”

More: Chrissy Teigen shares her unpleasant encounter with a racist

The latest of those is Teigen, who posted her topless shots, only to have them removed by Instagram. She posted them again — and again they were removed. So Teigen followed Instagram’s guidelines: “Nudity in photos of paintings and sculptures is OK.” 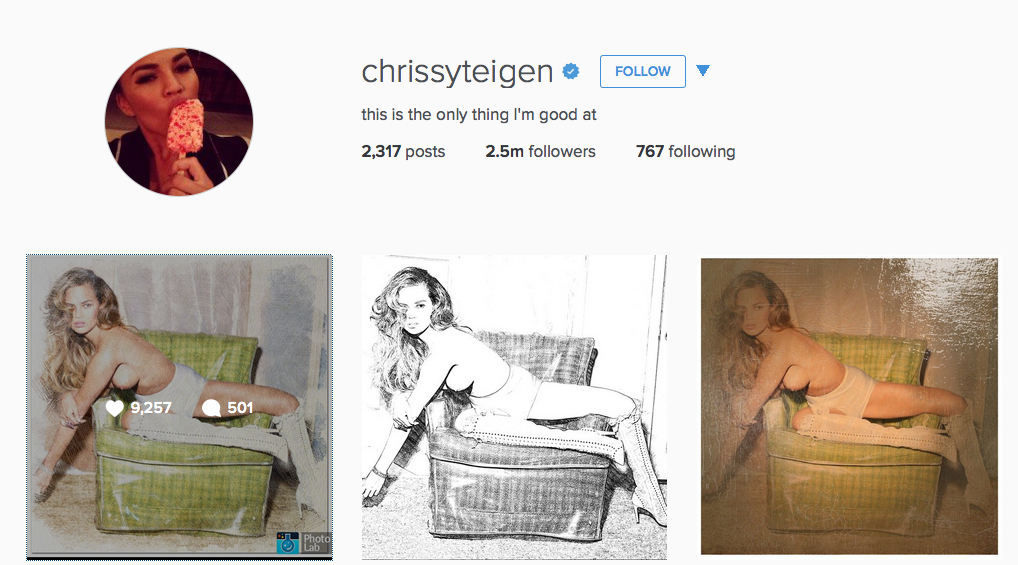 Sure, her photos with oil painting and sketch filters probably aren’t exactly what Instagram was referring to in its community guidelines. But is she actually violating those guidelines now that her nudity looks like an oil painting? Looks like a gray area to us.

More: Chrissy Teigen made a gross comment about hubby John Legend at the BBMAs

What do you think? Should Chrissy Teigen’s photos be allowed? Head down to the comments and sound off.