It’s time for another summer of Big Brother! The first of a two-night premiere event kicked off tonight and there is already controversy. Season 17 will forever be known as the season that we were introduced to the very first transgender houseguest, Audrey Middleton.

I realize that it may be hard for some to wrap their heads around the idea that she could be both transgender and a conniving, backstabbing phony. The fact that she is transgender does not mean that it’s her job to represent the entire trans community, nor does it suddenly make her heroic or instantly likable.

More: Julie Chen tears up as she speaks about one Big Brother star

On the contrary, when we first meet her, she is clear that she plans to “be kinda like Dexter Morgan,” explaining that she will be “carefully collecting blood slides of every fallen houseguest that [she’s] had a hand in dismantling.” She has come to play the game.

And as a competitor, she corners Da’Vonne and Shelli almost immediately, scheming to form the first alliance of the season. She lures them in by saying, “I sense, like, really strong vibes.” Then she makes it clear she wants a girl to win this season, adding, “We have to be really calculated.” She is the instigator of this alliance and we see quickly that she is devious.

But it is this next commentary in the Diary Room that had the Twitterverse all worked up — and many angry that she is “not properly representing the trans community,” or worse, accusing her of fat-shaming houseguest James Huling.

What went down was this: During the first Head of Household (HOH) competition — called the “flying tomatoes challenge” — the houseguests had to catch tomatoes being heaved at them while balancing on a plank that kept moving. Whichever houseguest caught 10 tomatoes first and didn’t fall off their plank won.

One by one, they fell, leaving the four remaining contestants: Jace the skateboarder, Shelli from Atlanta, James the self-proclaimed “hillbilly Asian” and Audrey. When all four go tumbling down at the same time, an instant replay reveals that James stayed on just a moment longer, winning him the title.

This is where it got ugly.

They cut to Audrey in the Diary Room, who says, “So, James wins HOH and I have no clue what’s going through this little rolly polly’s head.”

Then it got worse, “Looks like I’m gonna have to kiss his little camo ass and hope he doesn’t nominate me this week.” Yikes.

The comments on Twitter ranged from disappointed to how she shouldn’t be seen as a “terrible example of the trans community”:

Disappointing to hear “the first ever transgender contestant” insult someone by their looks, how embarrassing for that community #BigBrother 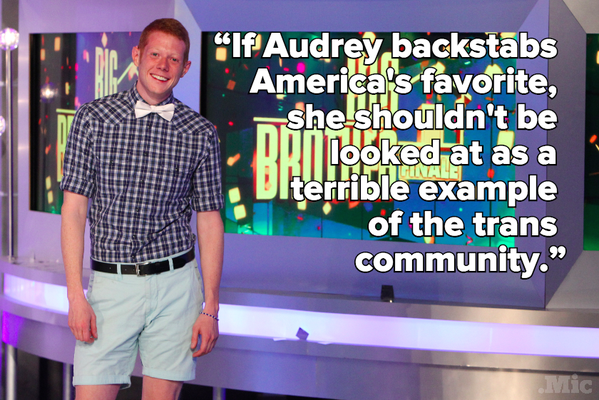 The fact is, real acceptance of any person — regardless of race, gender or sexuality — is to judge them based on what makes them just like everybody else, not what makes them different.

If that first commenter said, “Disappointing to hear the first-ever African-American contestant…” would that person be mortified? Would they then understand that a person could be a jerk no matter what else is true about them?

Can you imagine if everything you did was an example of your gender or race? Audrey is just a woman on a badass reality show and it’s actually quite misogynistic that she’s being identified as a woman who is a “bitch” when it is a competition show.

My friend, Sam, who is transgender, told me this: “We’re sensationalizing transgender these days, which is a mistake because then you start to define a group of people like they’re an oddity, a brand or a curiosity and not just people.”

All I know is that this is an exciting new season with a twist where we, the audience, are privy to a secret. The secret is this: One of the houseguests is a twin who will be trading places with their sibling, unbeknownst to the other contestants. Wouldn’t it be great if the real thing that makes Audrey stand out was that she is the twin and her sister is a much kinder, more likable person?

What did you think of the premiere? Let us know in the comments below.