Following her split last week from longtime boyfriend Nick Jonas, Culpo spoke publicly about the breakup for the first time on her social media accounts, where she reflected on heartbreak and the lessons she’s learned from it.

In a touching post on Instagram Friday, the former Miss Universe captioned a photo of the sun setting behind a row of palm trees with, “Your heart just breaks, that’s all. Heartbreak is hard but you find more and more things to be grateful for every day. One of those things is all of you. Thank you all. Yes I’m going to be okay and I love u guys so so much… every day is a blessing.” 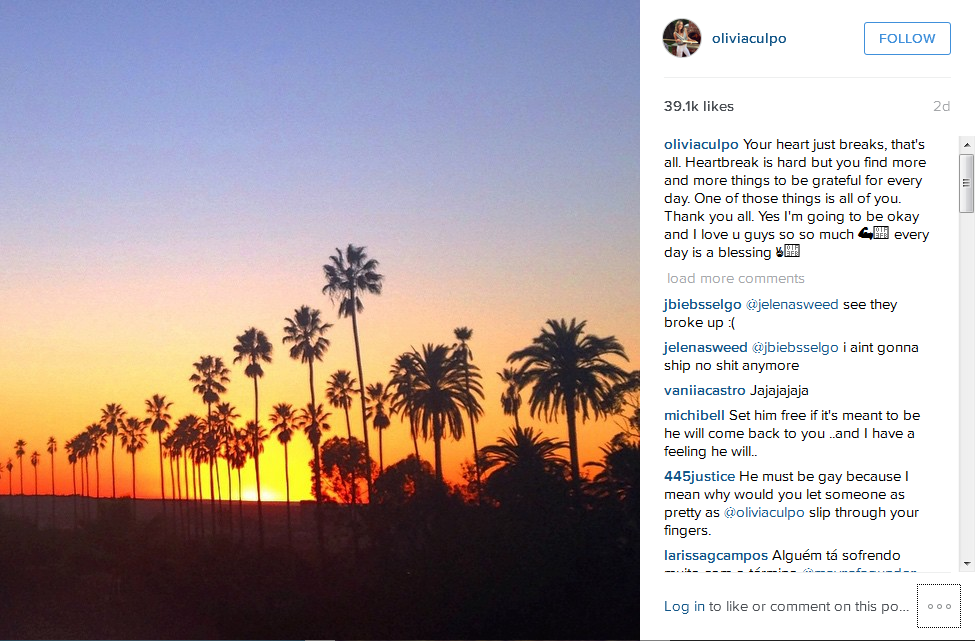 “Aww he doesn’t even seem affected but she’s broken hearted awwe stay strong love,” one fan wrote. Another added, “Its def. Hard to devote So much time and energy to one person and their happiness, just to tell you that its Not enough. Been there girl.”

Jonas and Culpo were first seen publicly together at the 2013 U.S. Open, almost exactly two years ago. Rumors of an impending engagement swirled around the couple regularly, especially after the 2015 Miss Universe pageant, where Jonas, performing during the show, got down on one knee in front of her.

“I went down and sang to her and I go on a knee and approached her,” he later told The Sun. “Her face was in full panic, she thought I was going to propose on national TV. We’re 22 so there’s plenty of time to do that… we’re still quite young, and we’re going on a journey.”

What do you think about the Olivia Culpo/Nick Jonas breakup? Do you think they’ll get back together? Or are they done for good? Head down to the comments below and let us know your thoughts.