There’s been quite a buzz around Ant-Man, Marvel’s newest superhero adventure, and it’s not just because there are a ton of insects involved.

The film — featuring Corey Stoll as Darren Cross/Yellowjacket, Michael Douglas as Hank Pym, Evangeline Lilly as Pym’s daughter Hope Van Dyne, and Paul Rudd in the title role — is gearing up to rival Jurassic World as the 2015 blockbuster of the summer.

SheKnows had the opportunity to interview the movie’s amazing cast and after experiencing the actors’ enthusiasm for their characters and what went into the production, we understand what the excitement is all about.

Here’s what we learned about Ant-Man, straight from the mouths of Stoll, Douglas, Lilly and Rudd.

More: 10 Things to know about Ant-Man

1. Yellowjacket’s suit is going to be sick on-screen

Stoll recalled how excited he was the moment he saw Yellowjacket’s outfit, which is mostly CGI, come to life on-screen. “I was sitting with Peyton [Reed] and Russell, who’s the photographer, and the special effects guys, and we’re all just getting sort of giddy, fanboyish ourselves,” he said.

2. Don’t expect it to be all comedy

Audiences have grown to know and love Rudd for his funny charm, and the trailer for Ant-Man definitely reflects his style, but he says this newest Marvel film was not intended to be all laughs. “The tone of it in what we were trying to write and what we were doing was not comedy per se. I mean, I think it fits more in line with what people have come to expect from these films,” Rudd said. “It will have funny parts in it. Sometimes it — you take them out because you don’t want to diminish the drama or the action… It isn’t Anchorman. But there are moments of levity. We’re dealing with ants here, after all,” he joked.

We’ve heard rumors that Ant-Man will share screen time with Captain America, but will he ever become a full-blown Avenger? It’s not out of the question.

Though Rudd admitted he was awestruck in the presence of the actors who portray Marvel’s Avengers, he didn’t shoot down the possibility of Ant-Man joining the lineup later on down the road. “I don’t know what the future holds for me,” he said, adding, “The only time I ever hung out with any of them — and it wasn’t even ‘hanging out’ with them, I was just in the same room as them — was at Comic-Con and that’s, you know, I was a wallflower. I just felt like I was walking around with The Beatles.”

Lilly seemed a little more confident that Ant-Man would join the power squad in the future. “Hank, Pym and Janet Van Dyne were the founding members of the Avengers. They created the name, they got the people together. I mean, that was their baby,” she said. “I’m assuming Ant-Man is probably gonna show up in a Marvel film somewhere along the way.”

More: Yay, Paul Rudd is Ant-Man! Wait, who the heck is Ant-Man?

4. It was made in a very collaborative environment

Rudd was instrumental in helping to do rewrites of the script, and Stoll says that he never felt left out of the creative process.

“We certainly added things, changed some story lines… added scenes,” said Rudd. “It was a fairly sizable rewrite, but the story is there.”

Lilly also felt her voice was always heard. “All of the suggestions that I sort of put forward and the things that I would, you know, ask for… they were very amenable and very open to it,” she said.

Rudd openly admits that he felt ridiculously self-conscious jumping around on a green screen wearing a suit covered in balls, pretending to be ant-sized and dodging objects that weren’t really there, but he also said that he wholeheartedly trusts the amazing Ant-Man team to make him look cool. “The best, most talented people are working on this thing,” the actor said.

6. It took a village to get Rudd into his Ant-Man suit

“It’s a little bit like a pit crew,” Rudd explained of the people assisting in transforming him into the mini superhero. “There’s a team,” he said, adding that the record was four people working to help him at the same time.

7. Hope is a huge part of the film

Lilly expressed her gratitude for being part of a production that valued both female actors and the importance of female characters in the plot. “There is such an appetite in the comic world, there’s such an appetite from fans to see fully realized, fully developed female characters and Marvel [is] very supportive in that,” she said. “I started out believing that I was walking into a film playing a supporting character, and it’s sorta now become, like, a trifecta with myself and Michael Douglas and Paul Rudd, and I’m not gonna turn my nose up at that. It’s good,” Lilly added.

8. But she’s not exactly a sympathetic character

“She’s just a bitch,” Lilly joked, adding, “She is sort of an island unto herself in this film, and what I love about that is that you’re never completely sure where her alliances are, because she doesn’t seem to like anybody.”

9. Douglas brought the thunder to set

Both Lilly and Rudd agreed that working with Douglas was a true sign of being in the big leagues. “I went, ‘Holy f***! I’m working now with Michael Douglas!'” Lilly said. “The thing is, from the minute he steps on set, he brings an energy into the world that puts you in your place, and I don’t mean that in a negative way — I mean that in the most incredible way. Like you are immediately transported into the world that you are supposed to be performing in, instead of this world, because he goes there and he goes 100 percent.”

10. The film’s crew are Marvel veterans

Douglas admitted one of the best things about working on a Marvel film is the fact that most of the behind-the-scenes people have all worked together before. “You have so many departments where… this is their fifth, sixth, seventh film,” Douglas said. “So just like the actors enjoy the comfort of familiarity when you know each other — makes it easier, you know — crews have the same thing. Crews know each other and so that aspect is special.”

11. Ant-Man is the film that finally makes Michael Douglas cool 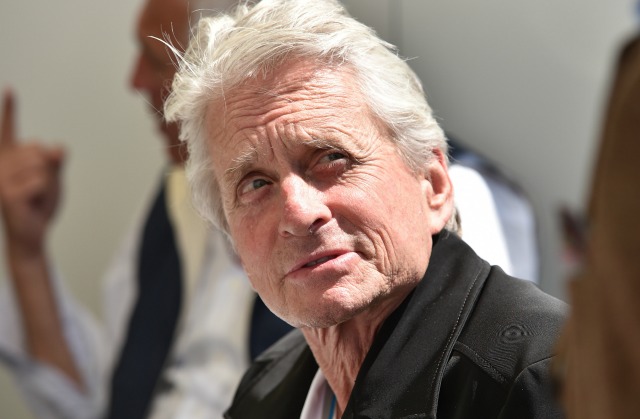 OK, so Douglas has been pretty awesome in the eyes of the general public for years, but he says that this is the movie that finally makes him stand out at home. “I finally got a picture that my son is proud of,” Douglas said. “It’s taken me 40 years… I’m cool. Now I’m cool.”