In a kind of melancholy new Snapchat video, Kylie Jenner revealed recently that she’s been bullied since the age of 9 “from the whole world, it feels like.” The youngest member of the Kardashian-Jenner clan, whose new lips are often the butt of people’s jokes, expressed how she feels like an outsider. And, ironically, after posting the intimate video, Kylie was — you guessed it — bullied.

Related story Why Kylie Jenner Is Focusing On Daughter Stormi Ahead of Baby No. 2

In the video — which has disappeared since, you know, Snapchat — Kylie said, “It’s kind of crazy I have 4 million people watch my Snapchats. Half of you guys think I’m weird, and the other half think I’m funny. But I’ve been bullied since I’ve been 9 from the whole world, it feels like sometimes, and I think that I’ve done a really great job in handling all this.” Jenner then capped off the video to her many followers with, “There are bullies everywhere. So, this was just a little, like, Snapchat, to tell whoever with their own bullies that the only opinion that ever really matters is yours and to never change.”

Us Weekly managed to catch the unsettling video and reported on it shortly after it was posted. However, almost immediately after the article went up, many of the site’s readers called Kylie, in so many words, a spoiled, whiny brat for daring to feel sorry for herself. Here is a sampling of some of the delightful comments.

More: Why Kylie Jenner’s 17-year-old lips do have an impact on other people 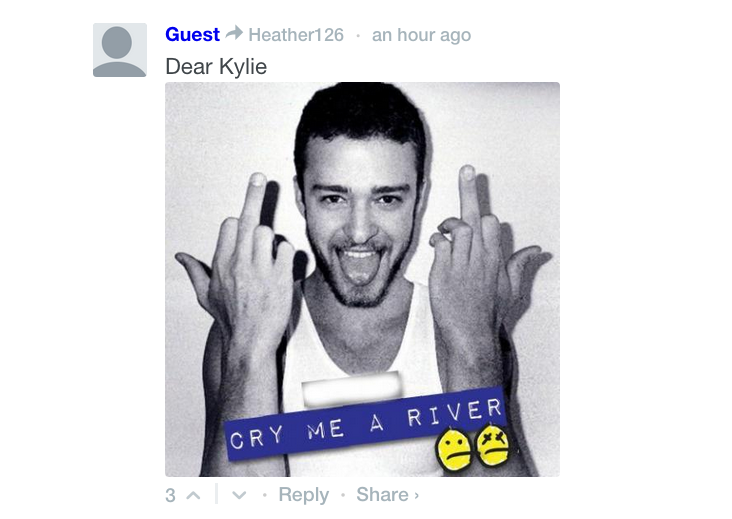 It doesn’t exactly come as a surprise that there are snarky comments following an article pertaining to a member of the Kardashian-Jenner family. It seems to be the majority of people’s knee-jerk reaction to bash them at every opportunity they get. And while in some ways it is hard to feel pity and empathy for someone who, at 17, has more money than most of us will ever see in our lives for doing nothing, at the end of the day, everything’s relative, and this is Kylie’s life.

Picture this: You’re born into a family of wealth. Everything you could possibly want is at your fingertips. But when you’re not even 10 years old, you’re informed that you’re going to start living your life on television. You have no say; you’re the youngest, after all. For the next almost 10 years, you’re in the public eye. You went through puberty in front of the world. You got upset in front of the world. You watch every single one of your absolutely gorgeous older sisters create major careers for themselves. And then they all leave to do their own thing, and you’re still stuck at home. If that was your life, if that was all you knew, it’s doubtful you would be feeling grateful and happy-go-lucky 24/7. Chances are, you’d have moments of sadness and feeling lost. Kylie may be much more fortunate than most of us, but if she wants to have a so-called pity party for herself once in a while, she has every right to.

We’re all better off than someone else in this world, but that doesn’t mean we can’t — and don’t — still have crap days and get upset about our lives. Is Kylie Jenner a pillar of our community and a positive role model to all of the little girls who look up to her? Eh, not so much. But what’s the point of kicking her when she’s clearly already feeling down? Also, there’s always the age-old argument of: If you dislike her so much, why bother reading about her? #justsaying

What do you think of Kylie’s “pity party”?