Our favorite summer blockbuster of all time, Jaws, turns 40 on June 20! In addition to scaring a whole generation out of the ocean, the movie spawned three sequels, inspired Shark Week and the cult franchise, Sharknado. Here are 18 secrets from the film. 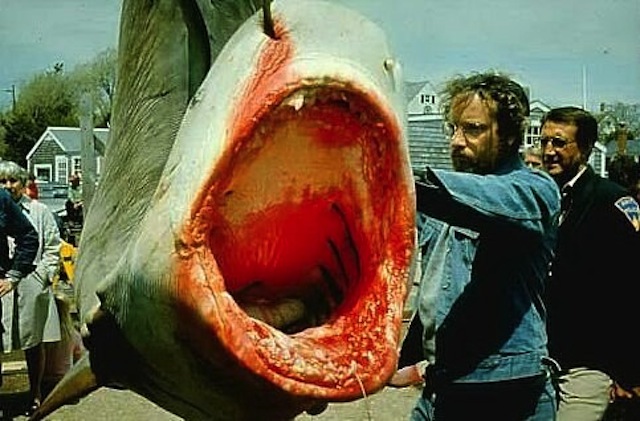 Before shooting the film, director Steven Spielberg named the mechanical shark after his lawyer, Bruce Ramer. Once the shoot started, however, the mechanical fish got another, not-so-likable name.

That’s right, Bruce is still so popular, he even has his own Facebook page!

More: Quiz: Who is your shark alter ego? 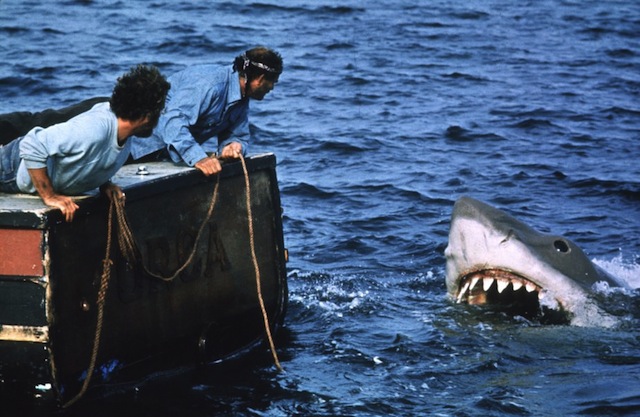 This was the nickname Spielberg gave the mechanical shark after they starting filming because it rarely ever worked. We can only imagine how frustrating that must have been, considering this was way before any decent CGI was feasible.

Peter Benchley, author of the book, Jaws, from which the movie was developed, said other possible titles were A Stillness in the Water, A Silence in the Deep, Leviathan Rising, The Jaws of Death and The Jaws of the Leviathan. 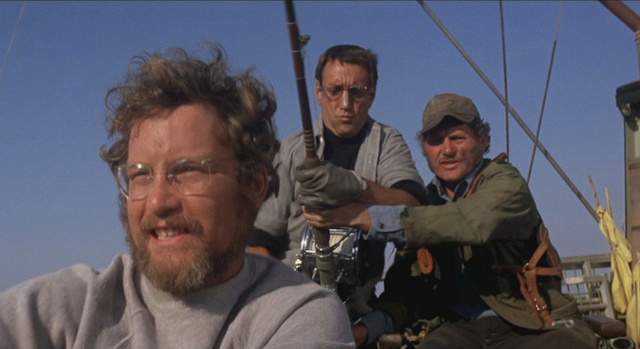 Spielberg said he offered the role of Hooper first to Jon Voight, Timothy Bottoms and Jeff Bridges before going to Dreyfuss because he loved him in the film American Graffiti.

Richard Dreyfuss said he initially turned down the role of Hooper because he thought the shooting process would be too grueling. He changed his mind after watching himself in the film The Apprenticeship of Duddy Kravitz. He considered his performance to be so awful, he wanted to make sure he had another movie lined up.

7. The real reason Jaws was shot in Martha’s Vineyard

The upscale vacation resort was not chosen for its picturesque quality, but instead because of its shallow sandy bottom that stretched 12 miles offshore. The mechanical fish would need to be pulled along on an underwater sled and they wanted to be as far from land as possible to increase the drama. “It was very important that no matter what direction my cameras turned, I couldn’t see land,” said Spielberg.

8. The trick actress Susan Backlinie used to protect herself 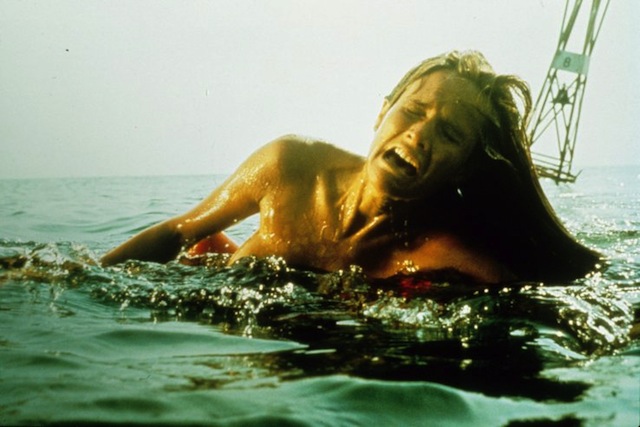 We all remember Chrissie, the pretty blond woman who gets chomped by the shark at the beginning of the movie. In order to get Backlinie to look like she was getting pulled down by a shark, cables were attached to her cut-off jeans and attached to two pilings. Five to six men would pull each line. To protect herself in case something went terribly wrong (no one would be able to tell if she was screaming for real, after all), she went to a marine store and bought the kind of safety hook you’d put on a sail. “I put it on to all the cables that they hooked to me so that at any time, if I got into trouble, if I got water, I got hurt, God knows what happens, I could pull one of those strings and I was free and clear and could come to the surface,” said Backlinie.

This famous line wasn’t in the book or the script. It was improvised by actor Roy Scheider and has become a euphemism for people faced with an incredibly difficult problem.

10. Dialogue taken from a tombstone in Ireland

Spielberg asked the actor playing Quint (Robert Shaw) to taunt Ellen (Lorraine Gary) and give her a hard time in one of the scenes. Shaw improvised and said, “Here lies the body of Mary Lee, she died at the age of 103. For 15 years she kept her virginity. Not a bad record for this vicinity.” The source of the limerick? A gravestone in Ireland.

According to Spielberg, red was only supposed to be used for blood and nothing else in the film. “We did have red wine, but there’s a symbolism to that,” he said. 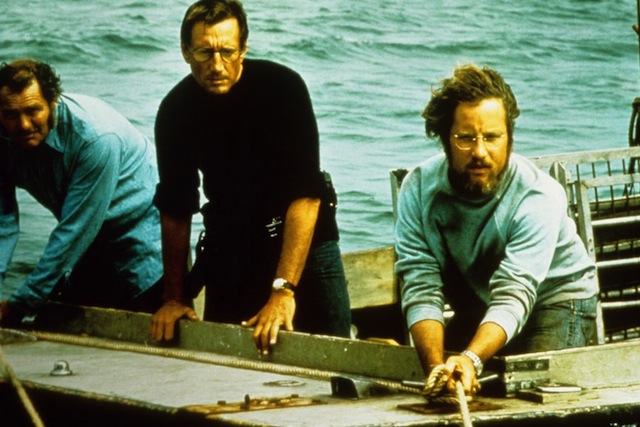 12. The song that had the cast and crew in tears

When Brody, Quint and Hooper are on the boat, they sing, “Show me the way to go home, I’m tired and I want to go to bed.” Apparently, the song summarized how the crew was feeling.

“I remember looking around at Charlsie [Bryant], the script girl, and at other people on the set with tears in their eyes, not because it was a sweet emotional scene, but because that had become their mantra,” said Spielberg, who admitted he desperately wanted to go home, too.

During a fancy dinner held on Martha’s Vineyard, the cast and crew encountered a huge buffet of food. By this time, everyone was so frustrated at the difficulty of the shoot, they were searching for a release. Roy Scheider decided to have some fun by starting a food fight. He apparently hurled the ritzy cuisine that included a big glob of mashed potatoes and gravy into Spielberg’s face. Richard Dreyfuss took his dessert and threw it in Scheider’s face. “It was a bit of a Three Stooges brawl,” said Spielberg.

“It was a melee. Food all over the floor. The help that was there serving the dinner came out and they laughed like crazy. I don’t know if the townspeople appreciated it as much as we did, but it was a tremendous blowing off of steam,” said Scheider. Afterward, all three jumped into the swimming pool to clean off.

At one point, the back of the boat they were shooting on got torn off, causing water to flood the vessel. It was sinking and quickly. Spielberg shouted, “Get the actors off the boat,” and sent safety boats toward to the sinking boat. Sound man John Carter, who won an Academy Award for Best Sound for Jaws, picked up the Nagra, a sound recording device, held it over his head and begged for his own life to be saved as the sea rose up around his body. Fortunately, the entire cast and crew were rescued. 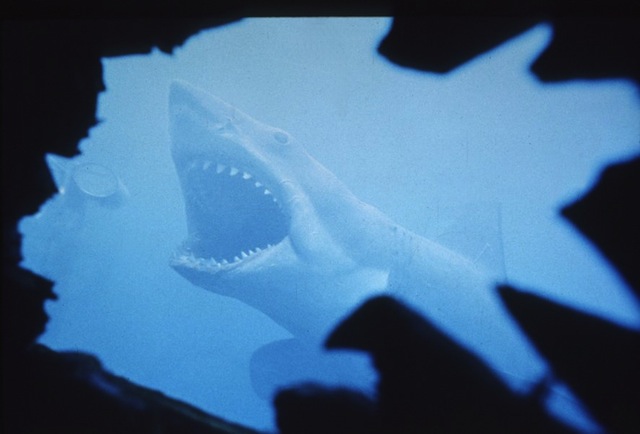 The original budget for Jaws was $3.5 million, but ballooned to $9 million by the time they finished shooting. Investing the extra clams paid off, however. The box office total for this one film is currently at $260 million, according to BoxOfficeMojo.com. 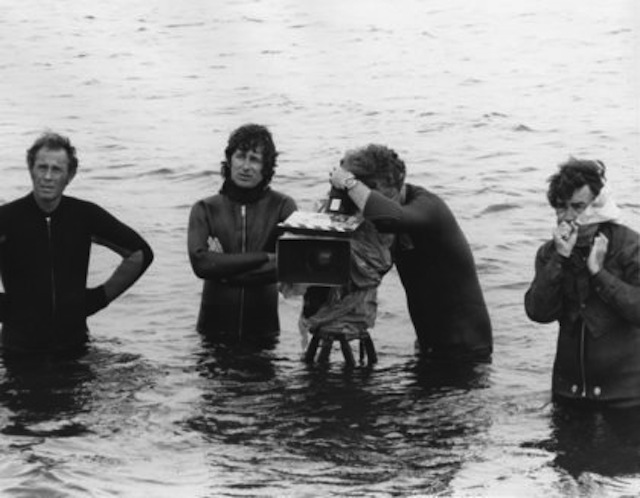 Once the shooting had finally finished, Spielberg made his way from Martha’s Vineyard to Boston on the ferry. “I vividly recall getting into my hotel room and having a complete anxiety breakdown. I mean, I don’t know what you’d call it, it was just a breakdown. I couldn’t stop shaking, my jaw was clenched, I couldn’t open my mouth. I was getting electrical shocks through my brain, like I was having seizures or something. I know this sounds really melodramatic but that’s exactly what happened, something neurological, emotional was happening to me. It was a full panic attack which I don’t ever remember having at that level before. I remember calling Richard, he was in the pub downstairs. Richard came up to me and I said, ‘I’m in really bad shape, Ricky.’ And Richard said, ‘Don’t worry, we’ll be on the plane tomorrow.’ Which we were.” 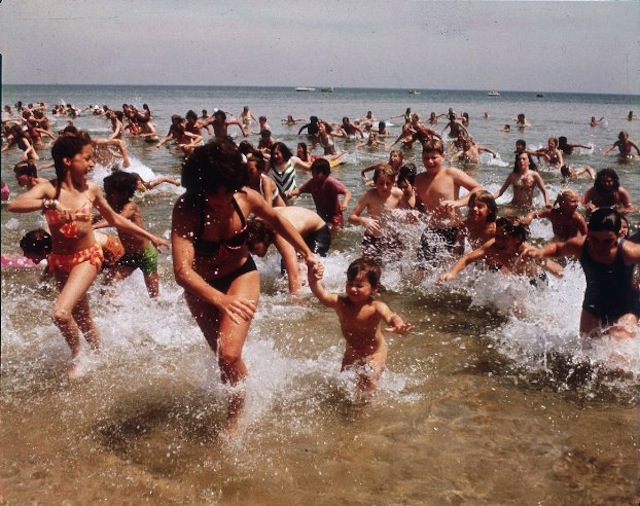 17. Spielberg laughed when he first heard the Jaws music — seriously

John Williams’ score from Jaws has become iconic, but Spielberg admits to laughing when he first heard the music. “It seemed wrong. It just seemed too simple. Often the best ideas are the simplest.” Yep.

18. Jaws game for kids was the coolest 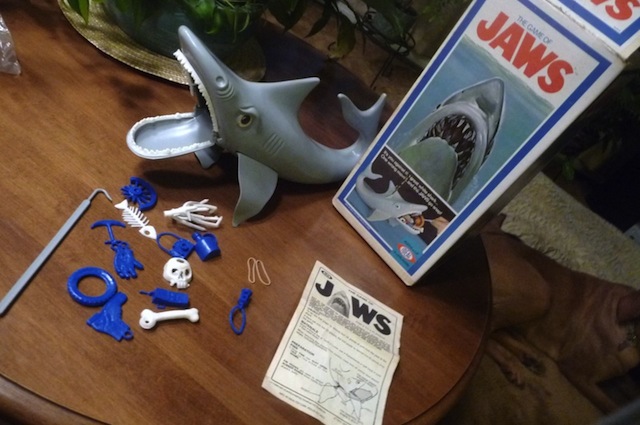 Oh, the hours we spent as kids trying to hook that broken wagon wheel or human skull without the plastic shark’s jaw clamping down on our pole. If only we had held onto the toy, which is worth a lot more today than our parents paid for it.

With the success of Jurassic World, we think a remake of Jaws should be in the works. Would you go see a new Jaws movie? Let us know in the comments section below.