The fuzzy, lewd teddy bear we all know and love is back for a sequel — only this time he’s trying to get recognized as having the same rights as a human being. We can’t think of anyone more perfect to help him than the lovely Amanda Seyfried, who plays his 420-friendly lawyer.

We wanted to know if Seyfried had a “Ted” of her own when she was a little girl. “I had a Teddy Ruxpin, but I still carry around a little angel I got the day I was born. It lives in the front of my carry-on suitcase. I used to take it to sleepovers. I wouldn’t sleep anywhere without it. I didn’t think I was superstitious, but I guess I kind of am.”

Part of the fun of hanging out with the raunchy plush toy in both films is that he and his best bud, John (Mark Wahlberg), love to party it up. In fact, there are very few scenes in this movie where they aren’t smoking pot. And Seyfried’s character Sam fits in just fine.

Though a pot-smoking lawyer may seem like a bit of a departure for Seyfried, she said she didn’t need to do any research into the marijuana culture at all. “I just know how much pot they smoked in the first movie and that’s all the research I did,” she said. 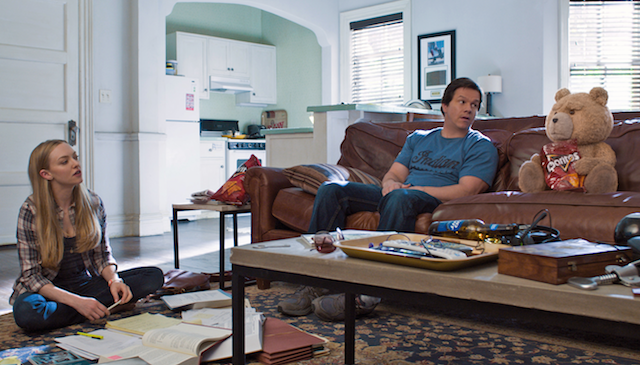 Hilariously, one of Sam’s prized possessions is an anatomically correct, penis-shaped bong — called a “dong bong” by potheads.

“Mark [Wahlberg] was as terrified of that bong onscreen as he was in real life. He was like, ‘Get that shit away from me!’ I really tried my damnedest,” she said.

More: Pitch Perfect fans: You need to jump on the #Bellas4life bandwagon

Of course, the bong wouldn’t even be in the film if it wasn’t dreamed up by the movie’s writer/director, Seth MacFarlane. But certainly MacFarlane couldn’t be the easygoing stoner we all like to think he is. We asked if he was more uptight while on the set.

“He’s stressed, very stressed, but not rigid. He’s not mean, he’s actually pretty laid-back in general. He does get stressed and he does get tired, but it doesn’t really manifest in any negative way. Even when he’s tired, I’m not really afraid of him. I don’t think anyone’s afraid of him. He’s nonstop because he’s in control of all these projects all the time and he doesn’t get a break and I kind of feel bad, but he’s doing what he can; he’s doing what he loves. He can be very social and outgoing, but he can kind of keep to himself, too. Working with him is just a great atmosphere all the time.”

Seyfried also shared with us that there are always hijinks surrounding Mark Wahlberg and his entourage. She loved pranking him.

“I’d sneak up on Mark and scare him or leave things in his trailer. I put this fake ugly rat in his toilet. I thought that was funny and then I got scared, so before he found it, I had someone in his entourage take it out ’cause I was scared of Mark and what he might do. He likes to retaliate.”

And, in fact, there was one joke that may have gone too far.

“He got sick of the pranks and kidnapped my dog. I was having 10 minutes of hysterics. He didn’t know how hard it was going to affect me so he made sure to get my dog back. It was rough for me.”

Apparently, her dog Finn was resting inside an air-conditioned Escalade eating free-range chicken until Wahlberg returned him. As upset as Seyfried was by the incident, she admits to egging on the men.

“I’m like a little troublemaker on set. I deserved to be pranked; he didn’t think I was going to get that upset. I f*** around a lot with the boys. It’s fun.”

So, what’s up next for Seyfried? “I’m playing the role of maid of honor. I’ve got to plan a wedding. I’ve been planning a wedding for a year almost.” The nuptials will be for her older sister, Jennifer.