What do you get when you mix a lot of “Bad Blood” with a little “Gimme More” and throw in a splash of glitter and disco balls? Madonna’s new video, apparently.

The pop icon teased fans with a glimpse of the upcoming video for her single “Bitch I’m Madonna” on Tuesday, and reactions to the tiny clip and poster for the vid have been mixed, to put it lightly. While some people are champing at the bit for the video to come out in its entirety, others are crying foul and instead encouraging the promotion of other artists.

The responses are across the board for good reason, as it appears the video is going to be both amazing and a huge rip-off rolled into one tight little package.

More: 9 Times Madonna made out with other performers on-camera (VIDEOS)

First, let’s examine the positive. While the public was already privy to the knowledge that Nicki Minaj was a collaborator on Rebel Heart, Madonna’s latest album from whence “Bitch I’m Madonna” came, she revealed today that the new video will feature contemporary divas Beyoncé, Katy Perry, Rita Ora and Miley Cyrus, in addition to Minaj. Some fans were overwhelmed with anticipation.

As exciting as the “Bitch I’m Madonna” lineup is, we have to examine one glaringly obvious element: The poster looks like a parody of Taylor Swift’s “Bad Blood” video.

The powerful, all-star female cast, the colors, the lines, the tone and facial expressions — it’s impossible to ignore, and Swift supporters weren’t afraid to point it out.

Is it intentional? Does Madonna have a silent beef with Swift? After all, she did employ Katy Perry, who is rumored to be the subject of Swift’s “Bad Blood.” The collection of amazing talent in “Bitch I’m Madonna” reads like a classic case of one-upmanship on Madonna’s part.

If Madonna’s not trying to top Swift, we might have to side with those questioning her originality.

And the similarities between “Bitch I’m Madonna” and other artists’ work don’t stop at Swift’s “Bad Blood.”

The title itself harkens back to Britney Spears’ single “Gimme More,” off of her 2007 album Blackout. This is the song that gave us the legendary line “It’s Britney, bitch.”

Coincidence? We’re also kinda wondering why Spears is absent from Madonna’s new effort, or if she was even asked to participate.

But the similarities don’t stop there, folks. Though the teaser for the video is super-short, we’re still instantly reminded of another musician: the artist formerly known as Ke$ha.

Glitter, disco balls and a person partying so hard they look to be riding/humping a broom? I mean, come on. 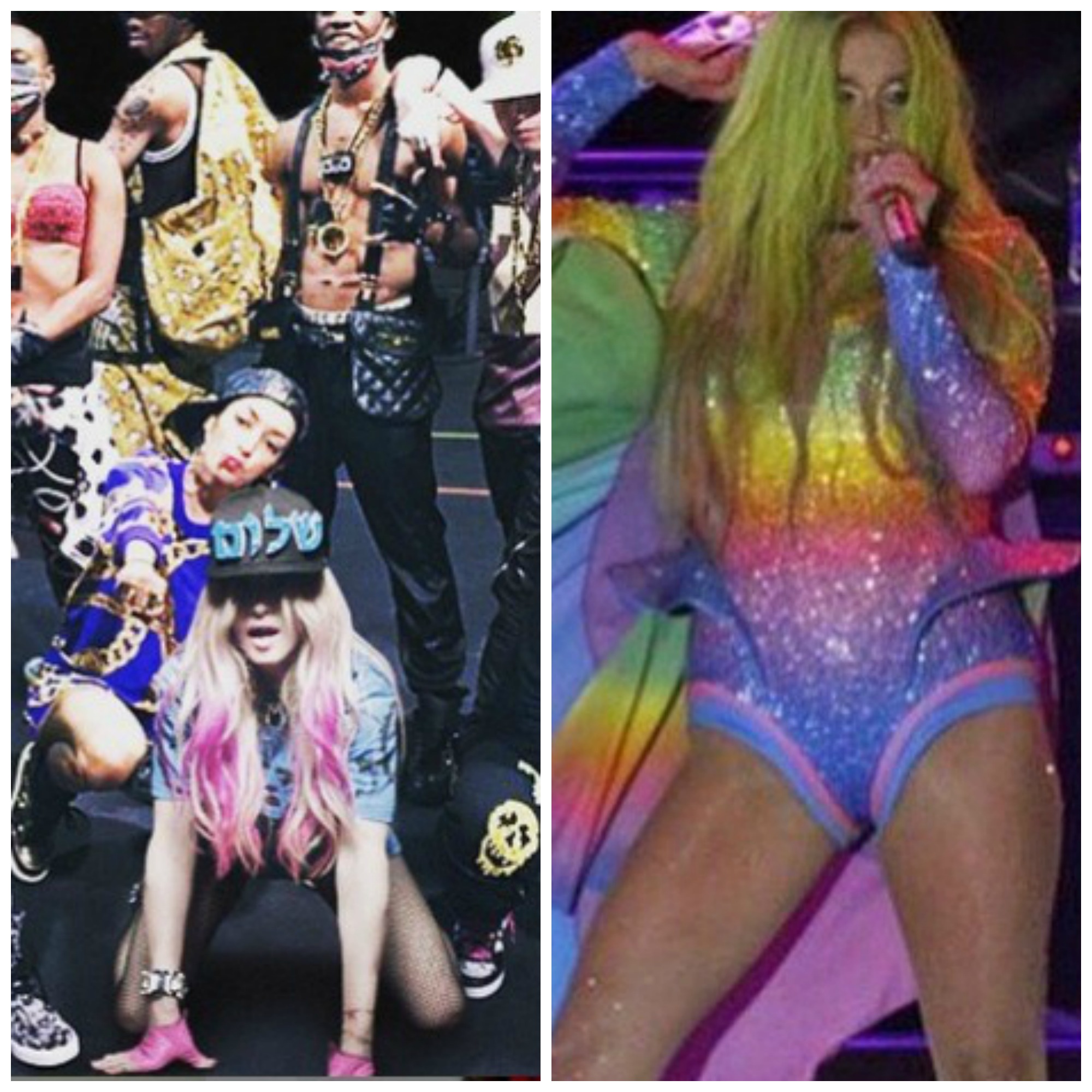 Madonna’s on the left and Kesha’s on the right, just to clarify.

So, are these resemblances coincidence or intentional? We’re talking about Madonna here. Love her or hate her, it’s a cold hard fact that the woman is a genius, so it’s hard to imagine that she isn’t aware of the similarities between her style and that of Kesha, Swift and Spears. It could be a nod to what inspires her, or could be that she just knows how to get people’s attention, be it negative attention or positive.

Even if her plan is to use other celebs to go viral, it’s working, and that’s all that matters to her. After all, bitch, she is Madonna.