That’s pretty much the message fitness blogger and lingerie model Sarah Stage, who gained media attention for her incredibly fit and toned pregnancy body earlier in the year, has to say to people who think breastfeeding belongs in public. And to prove it, Stage posted to Instagram a beautiful photo of her own 2-month-old son, James Hunter, breastfeeding.

“If you don’t like this pic, just unfollow me. No need to hate on a beautiful moment with my son #normalizebreastfeeding,” Stage wrote in the caption for the photo, which shows her dressed in jeans and an orange tank top, gazing lovingly at her son while she feeds him. 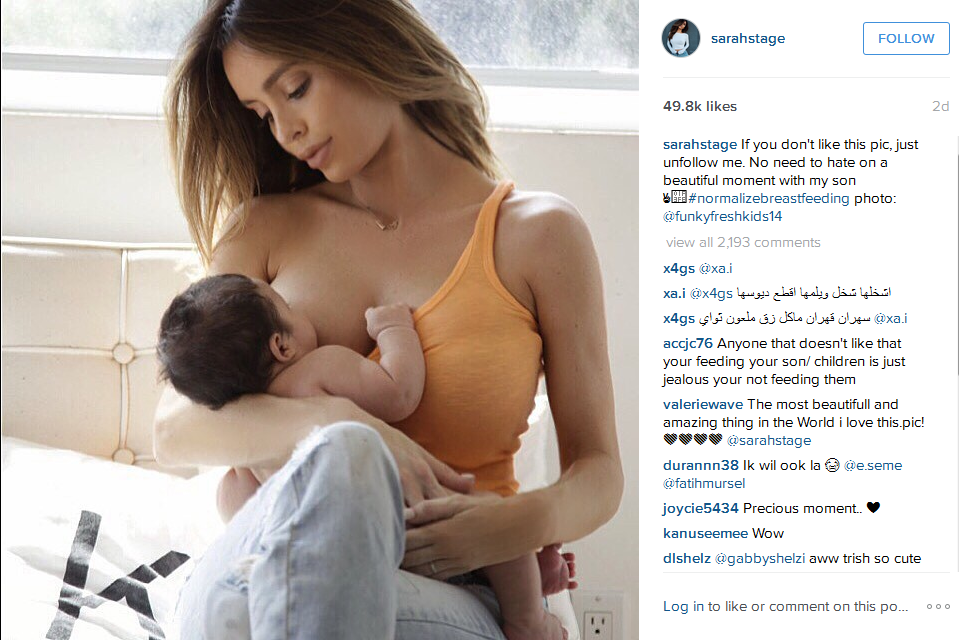 More: Mom says bridal store told her to breastfeed on the street

Stage lost a lot of fans over the photos she posted during her pregnancy of her tiny baby bump, but she reports James was born a healthy 8 pounds, 7 ounces. She’s a clean eating and fitness fanatic and kept up her healthy, active lifestyle during her pregnancy. She gave birth to James on April 14 and has already gotten back to modeling, People magazine reports. Now, hopefully she’ll gain back some of the fans she lost before by standing up for moms with this picture.

Instagram has stirred up controversy by banning breastfeeding photos in its famously strict terms of use. It only lifted the ban in April after backlash from users and celebrities alike. The updated guidelines now read that “photos of post-mastectomy scarring and women actively breastfeeding are allowed.”

What do you think of Sarah Stage’s photo? Do you think Instagram was right to ban breastfeeding pictures? Or does a photo like this on deserve to be shared on social media? Head down to the comments and tell us your thoughts.